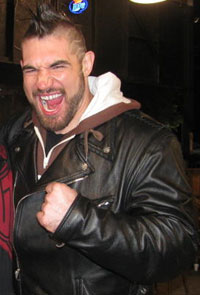 Every time I think of Brock Lesnar, I keep gong back to Joe Rogan’s theory that Brock actually comes from a long lineage of vikings who just orgied and had sex throughout the generations to create one concentrated genetic badass that has the neck the size of that dude that broke Batman’s back. Lesnar’s neck is so thick scientists could drill for natural gas on that thing. That’s why when Brock Lesnar says that he ‘broke someone’s head‘, you sort of tend to believe him. In an interview with ESPN.com about UFC Undisputed 2010, Lesnar talks about that moment when he sent Heath Herring flying across the octagon with just one punch.

“And you know what, that was one tough son of a [expletive] because he took another 14 minutes of ass whuppin’ before I put him into retirement. He hasn’t fought since I broke his [expletive] head. I was surprised when the fight wasn’t over after that first punch, but that is one tough dude.”

So aside from Heath Herring complaining that he only made $40,000 in his fight with Lesnar, it still seems that it was a nice little retirement package before Heath goes off to Hollywood and plays ‘Henchmen A’ in Angelina Jolie movies. [Source] 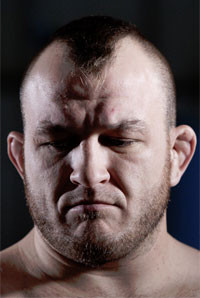 Mike Whitehead is NOT wanted by the cops for sexual assault
← Read Last Post
Despite owning 5 belts, Jake Shields says he's not an ego maniac
Read Next Post →
Click here to cancel reply.