Brock Lesnar is hungry and plans on eating Shane Carwin

I once had a 65lb English Bulldog approximately the size of Shane Carwin’s fist. Don Vito could level anyone who bent down to pet him with a single pouncing motion, and in that way, he had a lot in common with the man who wears gloves the size of hiking backpacks. Shane Carwin hasn’t made it out of the first round with any of his twelve previous opponents. In six days from now, those fists will attempt to collide with Brock Lesnar’s skull; an impact that may generate aftershocks powerful enough to derail Japan’s bullet trains on the opposite end of the planet. To Brock Lesnar’s credit (and the canister of mutagen that birthed this genetic-anomaly), he may be the only man powerful enough to withstand those punches, and return the favor with his rhino-like power of his own. The WWE superstar has been preparing this fight for over a year, overcoming career-threatening illnesses and less-than-exciting dietary changes to accommodate his post-diverticulitis workouts. We’re less than a week out from the fight, and Lesnar has begun his weight cut for his July 3rd meeting with Shane Carwin. Check out this interview where he talks about exactly how hungry he is:

“I’m sure Shane Carwin has done everything he can to prepare for this fight. I know I am very satisfied with how my training camp went. I’ve envisioned this fight over and over in my head. Each time I see it playing out, my hand is up in the air. It’s just the way it’s going to be. No knock on Shane. I’m sure he’s bringing his A-Game against me. Good for him. He better … because I just don’t see any man being able to take this championship away from me. That’s taking food off my table. I’m a hungry man right now. Just thinking about someone taking food away from me…

I’m not sure if Shane Carwin would taste very good, but after a weight-cut from wherever he hangs out on the fitness spectrum to make 265lbs, whatever Brock Lesnar eats immediately thereafter will certainly be of epic proportions. Props to Lesnar for giving us all terrifying mental images. This marks the first cannibalistic hype-references since Mike Tyson talked about eating Lennox Lewis’ children. Let’s just hope that Brock doesn’t see the video of Tyson actually trying to eat Holyfield… [Source] 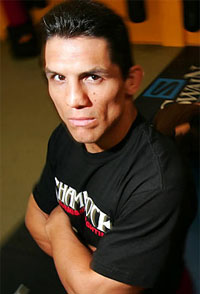 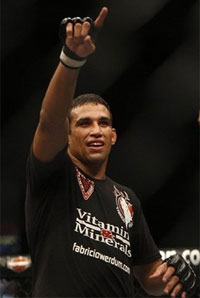