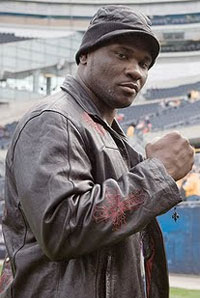 In an interview with Loretta Hunt of Sherdog, Brett Rogers gives an explanation as to why he was hand-selected to bang against Ubereem instead of Fedor.

“I would tell (naysayers) to recognize what’s going on the organization, recognize my opponents and understand that’s this isn’t something that just occurred. I’ve been going after (Overeem) for a good year or so, underground, online, calling him out to get him to come back to the States because he’s been hiding (in Europe) for almost two years.”

There, now who’s going to disagree with that? Even if you do disagree with that statement, there’s not much you can do aside from locating Brett Rogers and expressing your complaint to his face. And that, my friend, is a guaranteed way to get your entire head removed from your body with one immense punching motion. [Source]