Bones Jones vs. The Janitor going down at UFC on Versus 2 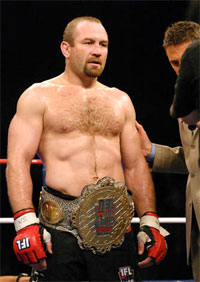 If there was ever a scarier janitor than Vladimir Matyushenko, the only way to appropriately depict him would be on paper, portrayed as a super-villain in some Marvel universe where the legal age to buy a comic was 30. He’s that raw. This is a dude that got his nickname by hitting his opponents so hard that he liquefies their consciousness into a hardwood-safe cleaning compound, similar to the lemon scented Pine-Sol you use in your kitchen. The Janitor just finished ‘mopping the floor’ with Elliot Marshall at UFC 110 earning his second consecutive win in the UFC. Both of his opponents were served walking papers.

Somewhere in San Diego, Brandon Vera is nursing a broken skull courtesy of Jon Jones. Before their fight on the inaugural ‘UFC on Versus’ card, Vera said that nobody can stop the rocket that is Jon Jones…they can only hope to slow him down. That’s all sorts of deep. Especially when the man saying it has been nicknamed ‘The Truth’. We don’t know if he’s right, but Vladimir Matyushenko will be the next man try. The Garv is reporting that the fight will go down August 1st in Salt Lake City, Utah and you’ll all get to watch it free on the Versus Network.

Dana White promised fans he’d find a way to ‘pay them back’ following UFC 112 in Abu Dhabi. If putting fights like this on free TV is his way of paying us back, I hope Anderson Silva incorporates Salsa lessons into his next training camp. [Source]