BJ Penn vs. Matt Hughes III is going down at UFC 123 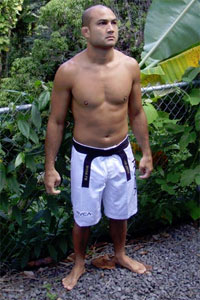 If you open up a bag of Black Forrest Gummy Worms, you will notice that each worm has a smile on their face. These worms grew up with the knowledge they were going to be stuffed in plastic bag and consumed at corner stores. People are going to sink their teeth in their little high fructose bodies and rip them to pieces in the name of a late night snack, and these worms are happy about it. I can only imagine that from birth, the greatest honor that could be awarded in their culture is to be digested amongst their fellow worm. The purpose of life can only be equated to the one true thing you want to achieve. If you’re reincarnated as a Gummy Worm, be the most edible piece of candy in the bag. If you’re an alcoholic, be the best alcoholic you can be. Live up to who you are is all life asks of us. That’s why BJ Penn vs. Matt Hughes needs to happen for a third and final time — and according to Ariel Helwani, it will.

Both fighters have agreed to settle their differences in a rubber match on November 20th at UFC 123 in Auburn Hills, Michigan. After successfully defending the UFC welterweight title five consecutive times, BJ Penn managed to rear-naked-choke Matt Hughes out of a belt and he did it in only the first round. Shortly after the fight, BJ Penn said that the UFC’s talent pool wasn’t deep enough for him and the dude just left. According to Penn, his UFC contract expired which enabled him to sign with FEG while still retaining his belt. Unfortunately, the American judicial system didn’t quite see it that way. Penn was stripped of his belt and a bout between Georges St. Pierre and Matt Hughes at UFC 50 would determine the new UFC welterweight champion. We all know that Hughes dominated GSP and finished him off with an armbar with one second left in the first round. BJ Penn found out the news, halted his extended trip to Japan and rejoined the UFC to reclaim the belt that he once wore around at parties in Hilo, Hawaii. This time, it didn’t go so well for The Prodigy. Late in the third, Matt Hughes flipped the switch on BJ, trapped his arm in some modified side-mount, and gave us one of the most disturbing .gifs in MMA history. BJ took roughly forty unanswered shots before the ref jumped in. It wasn’t a late stoppage, it’s just that it’s impossible to knock out BJ Penn.