BJ Penn vs. Jon Fitch goes to a strange and confusing draw

Shortly after BJ Penn vs. Jon Fitch ended in a majority draw, my neighbor (who’s nearly passed out on my floor) screamed ‘Jon Fitch can’t even finish a decision!’. I don’t necessarily agree with his viewpoint, nor do I agree with my neighbor spilling his bottle of Corona over my rug and not offering to clean it up, but it does illustrate one glaring point about tonight’s UFC 127 main event — actually, it doesn’t.

The FightMetric numbers are in for tonight’s fight and it appears that Jon Fitch landed 143 punches compared to 2 by BJ Penn in the final round. Yes, 2 strikes were landed by The Prodigy in the third round which yielded a 28-28 from two judges making the bout a majority draw. I’ve been on the phone talking with a few friends and we’ve come to the conclusion that the only way this could happen is if BJ Penn won the first two rounds 10-9 and then Jon Fitch grabbed a 10-8 in the third round. After the fight wrapped up, BJ Penn suggested that if he lost this fight, he would have to ‘reevaluate his career’ which sounds strangely like premature talks of retirement. However, according to Penn, the MMA ‘Gods’ granted him this draw in order to get his mind out of a career-ending gutter.

Here are the FightMetric stats from the third round of BJ Penn vs. Jon Fitch along with a final analysis of the entire fight which shows Jon Fitch winning the fight by a large statistical margin. 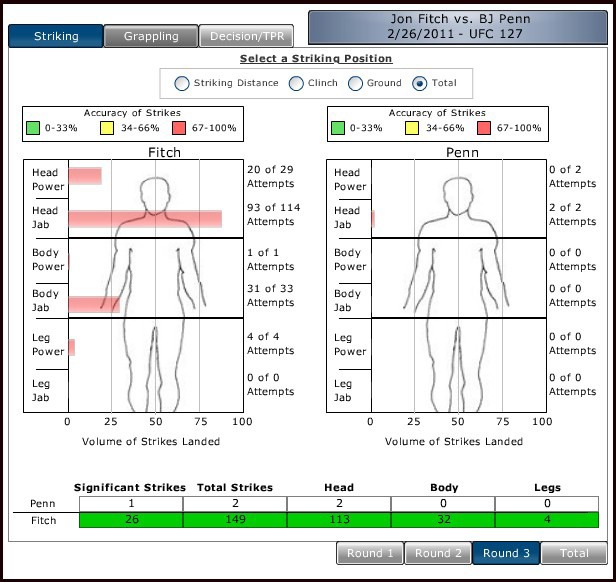 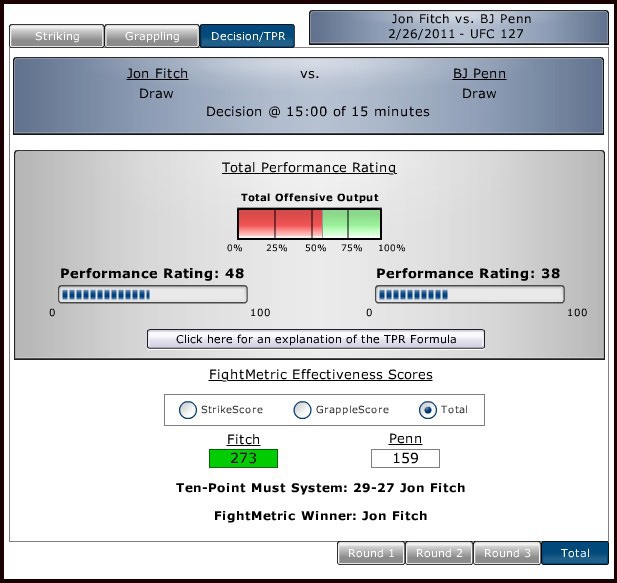 The UFC 128 trailer is something that should be viewed immediately
Read Next Post →
Click here to cancel reply.