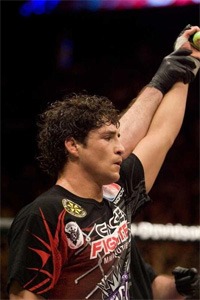 Hopefully the new site design will have you urinating on your next door neighbor in excitement. If you’re neighborless, you’re always welcomed to fly out here solely to urinate on my functional alcoholic neighbor’s head and all twelve of her kittens who roam this apartment like they’re some lost tribe in a National Geographic magazine. In other non-kitten related news, it seems like BJ Penn and Diego Sanchez will be headlining the UFC 105 card which will be in the UK (and also have our dude DaMarques Johnson from TUF 9 on the card).

The UK fight magazine ‘Fighter’s Only’ (which makes no sense that we’re reading it) claimed that Sanchez has agreed to the title shot which will only happen a couple of months after BJ Penn defended his belt against Ken-Flo. Despite getting submitted Penn via his mutant enhanced limbs, Kenny Florian walked out to Wu-Tang Clan which should earn him points in anyone’s book. If Diego Sanchez comes out like he did during the Clay Guida fight then we can only expect one of the greatest fights in UFC History (and if he doesn’t, we can always expect him to answer ‘Yes, Yes, Yes, Yes, Yes‘ to a question we never asked him). [Source]