In this history of MiddleEasy, only twelve articles (including this one) have been written with the word ‘Fitch’ in the title. Fifty-two separate articles with ‘Penn’ in the title have been published on the site. Today marks the first time in the site’s history that we’ve used the word ‘harmony’ in any title. Unfortunately, it wasn’t ‘Harmony Korine’, the director of ‘Gummo‘, ‘Julian Donkey-Boy‘ and the highly underrated ‘Mister Lonely.’ Apparently there’s a movie he created in which David Blaine filmed Harmony going into bars and getting punched and kicked within an inch of his life. It was just too brutal to be distributed, but not too violent to be talked about on MiddleEasy.com. In a sense, Jon Fitch vs. BJ Penn was brutally — confusing. Some could argue that Fitch decisively won the fight while others believe the draw was entirely justified. Regardless of what you think, it hasn’t stopped the two from hanging out at a UFC 129 after-party in Toronto. Here’s what Jon Fitch told BJPenn.com about the unexpected encounter.

“I saw him in Toronto and we were at the bar. I walked over to say hello…and the next thing I know somebody was shooting a single-leg [takedown] on me. I look down and it’s B.J., laughing his a– off,” Fitch said. “We’re on good terms, but I still want to kick the crap out of him.”

Judging from this picture, we clearly know who was having the most entertaining time in Canada. Cheer up AKA, we caught Osama Bin Laden. That should be something to smile about. [Source] 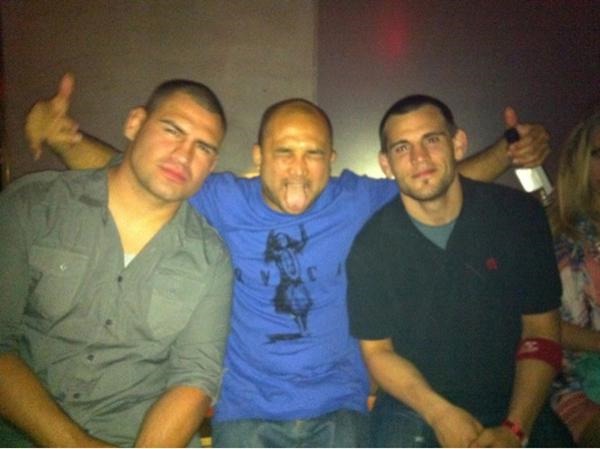 Now that Vitor Vianna has signed with Bellator, check out this video of him sparring with Wanderlei Silva
Read Next Post →
Click here to cancel reply.