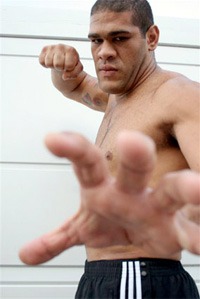 You know all that blurry footage of Bigfoot walking in the forest? You can combine all those tapes and then compare it to a picture of Antonio Silva and every Bigfoot expert out there would be out of work. Antonio Silva is Bigfoot, the mystery is over. Everyone can stop spending their weekend searching for some mythological creature in the woods. Dude’s right here and he just defeated Andrei Arlovski via unanimous decision. Bigfoot went from shaky camera footage to a 15-2 MMA record. Give the dude props, Harry and the Henderson’s couldn’t do what Antonio Silva did in the course of only 5 years. Just when you thought it was erased from your childhood, now you’re going to have that TV show stuck in your head the rest of the day. Give it up for late 80s television, that stuff would never fly today. 1986 was the only time in which a hairy alien that ate cats was socially acceptable.

After rocking Bigfoot Silva in the first round, Mike Kyle fell on Silva and laid an enormous amount of ground strikes. Bigfoot managed to weather the flurry of punches, elbows and headbuts to finish off the round. Earlier in the second, Bigfoot Silva managed to take down Mike Kyle and apply gigantic fists to Kyle’s face, resulting in a second-round TKO. Good job by Bigfoot and Mike Kyle proved that he had the power to detonate an explosive device on a guy that is an outdoors, shaky video-camera legend. Now let’s get some Bigfoot Silva vs. Josh Barnett action, please.