Those controversial kicks that Jon Jones has employed so successfully over the last year or so is now crossing over to the heavyweight division, and whether or not you think they have a place in the sport of MMA, there’s a certain irony to Travis Browne throwing them then injuring his own knee.

It seems like Bigfoot isn’t a fan of those leg kicks to the knee, you could tell as the opening minutes of the first round wore on his enrage meter filled, and he eventually placed Travis Browne’s back firmly on the chain-link. Moments later Browne would strike Bigfoot, this giving him that final bit of energy to finally go into Berzerk-mode. You could literally tell the moment Bigfoot pressed both shoulder buttons and triggers on his controller to unleash his inner mythical creature that resides in the Pacific Northwest, and when he did, it left Travis Browne crumpled with head flopping.

No .gif yet, just a single, non-moving image of rawesome. 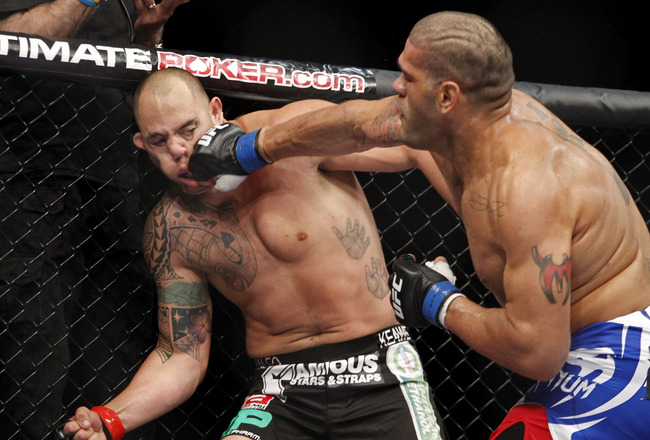 Bigfoot has placed his very large stamp on the heavyweight division. Who does he take on next?

Sometimes, you’re just not entirely sure if you’re conscious or not, so you jump out of the ring
← Read Last Post