Ben Henderson proves that even Jesus Christ is an MMA fan 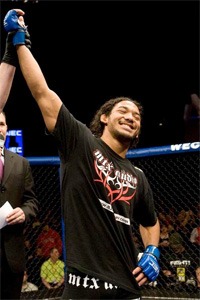 Damn, I don’t fully understand what I’m watching but it’s damn exciting. You’ve probably noticed that throughout this WEC 48 PPV, there has not been a single mention of WEC. Even Bruce Buffer announced Bendo as just ‘The Lightweight Champion’. Mike Goldberg even mentioned Urijah Faber as the longest featherweight champion of this organization. If this is your first WEC broadcast and if you say that you’re not confused, I can never believe anything you have to say for the rest of your life. The only hint of a logo of any kind is the UFC logo on the ring girls robes.

Regardless of what organization Ben Henderson is the lightweight champion of, the dude just gave us an exhibition of 155lb dominance with his speedy victory over Cowboy Cerrone via guillotine in just 1:57. Bendo just defended his belt faster than it took my functional alcoholic neighbor to fall up the stairs on a Thursday night (miss you neighbor). After the fight, Ben Henderson thanked Jesus for making ‘everything possible’, a statement that atheist Joe Silva silently chuckled over. Props to Bendo on retaining his belt and his on-going frate trane through MMA. 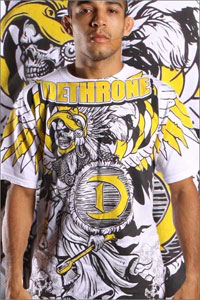