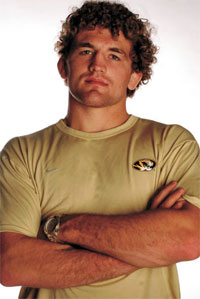 Tonight we learned that Ben Askren passes guard like cops pass through red lights in Los Angeles. I’m convinced that Ben Askren could takedown God at will, let alone any 170lber out there. I’ve scanned my mental Rolodex of other welterweights and the only names I can extract are Georges St. Pierre, Jake Shields and Tyron Woodley — and I would donate all the food in my refrigerator to see each of those fights.

In a dominate five-round unanimous decision, Ben Askren snatched the Bellator welterweight belt from Lyman Good in a display of ubermensch-like wrestling. If you missed the fight, just go to your nearest cafeteria and ask for pasta with meat sauce. Now imagine the meat-sauce is Ben Askren and Lyman Good is the pasta. Ask the cafeteria lady for extra meat sauce and that’s pretty much the entire fight. Crazy amount of meat-sauce on top of a little bit of pasta. In fact, every MMA match from 2001 can be described using Italian food analogies.

There’s a reason why Askren is ranked in our official Frate Trane list. There are few things that exist in this universe that can stop Ben Askren from putting you on your back. You, not me. It would be silly to get in the cage with this guy. I’m quite fine with my box of Devil’s Food Cookies and my DVD box set of The Golden Girls. Props to Ben Askren on his continued frate tranery through the 170lb division.