In the aftermath of all this, ONE FC Welterweight champion Ben Askren uploaded a stern speech directed at Cerrone. Perhaps he found issue in the insults fired at the wrestling strategy of Daniel Cormier, and also Cerrone offending and entire subculture of people.

Donald "Cowboy" Cerrone you are so mentally weak it is embarrassing!

Once Cerrone heard word of this, he was even more pissed off. He took to Twitter and called Askren a “bum” which, luckily, wasn’t a slur that would offend anyone in the LGBQT community. Akren was having none of it, and was eager to try and compare accolades. 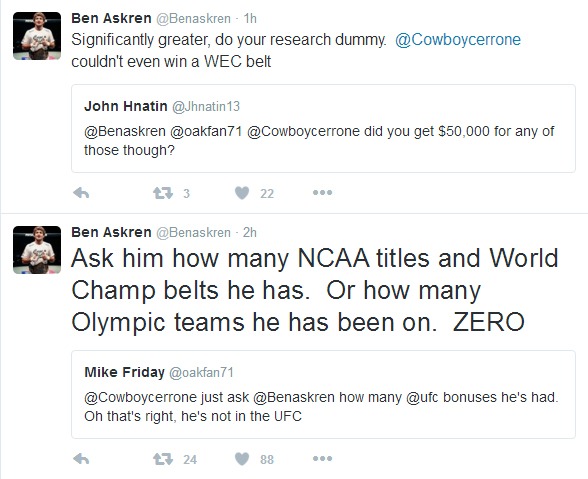 Now that there is some Grade A beef here, Will this end up being one of those awesome match-ups we’ll never get to see? There’s no way you can try to discredit Askren on his accomplishments, but there will be those apologists who say he never got tested against “the best” in the UFC. Well, that may be true, but I’ll leave you with him showing a little bit of his own “Cowboy” skills against Andrey Koreshkov.

Watch Askren rodeo ride the same guy who embarrassed Benson Henderson in his Bellator debut in full below.