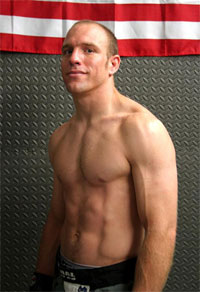 This is the kind of news that makes you want to slam your head on your living room wall until your neighbors repeatedly knock on your door and scream obscenities in Spanish. It looks like Bellator color commentator, Jimmy Smith, is not coming back to Bellator in 2011. The decision was not on his accord, however. According to Jimmy Smith, Bellator offered him an ‘unacceptable’ contract that somehow managed to be worse than his previous contract. MiddleEasy caught up with Jimmy Smith this week to see what exactly happened with the deal.

“Here’s the situation right now, we had a contract through 2011 to do Bellator. They wanted us to sign with their new network deal an extension of three years, starting with this year [2011]. The contract was just unacceptable, it wasn’t what we wanted so I refused to sign the extension. I thought the contract we had until 2011 was a better deal, and that was it. I haven’t heard anything since late November.

“It’s possible that they can come back the eleventh hour and say ‘we want you back, here’s the deal’, but that looks increasingly unlikely is the best way I can put it.”

“It’s really odd, considering what I thought was a really great breakout 2010 year for Bellator and for Sean and myself as a broadcast team it feels like we had a lot of momentum and everything was going great — and then, boom. It was almost within — not even a week for everything to fall apart. It was really weird considering the kind of 2010 we had.”

Damn. While it’s not finalized just yet, nothing short of a divine intervention is the only thing that could keep Jimmy Smith with Bellator. If you still need your Jimmy Smith fix (like this guy), we suggest you find episodes of ‘Fight Quest‘ on the Discovery Channel, and while you’re at it, catch this episode of ‘Mark and Olly’ on the Travel Channel since it was, undeniably, the greatest show of 2009 that no one watched.