Before you watch the premiere of TUF 12 tonight, check out what GSP had to say about Koscheck 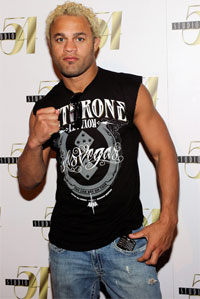 The TUF 12 conference call was held yesterday afternoon and the entire crew of MiddleEasy.com missed it while we argued over who should win the VXRSI T-shirt contest. Our friendly meeting turned into a scene from the movie Roadhouse when Bauzen broke a bottle on Jay’s head, I smashed a chair on both of their back’s and finally Zeus picked each one of us up and threw us down the length of the bar top and we all crashed through a wall and ended up in a giant pile. Actually none of that happened since it wan an email debate, but I’m pretty sure at one point, we all wanted to do those things to each other. Luckily, the spirit of Genki Sudo’s ‘We are all one’ came over us and we were able to come to a consensus.

Thankfully MMAMania.com listened in on the conference call and let everyone know what GSP had to say about Kos:

“Josh is very predictable. It [TUF 12] went exactly like i thought it was going to. I can’t control how Josh behaves. I just stay myself. He tried to get in my head, which is a good thing for me. Look at all the guys who I fought who was arrogant and disrespectful to me. I beat them all. It’s good for my motivation. I hope he keeps it up … He [Josh] lies a lot. He says he’s happy fighting in Montreal, of course he’s not. He says I’m fake. There is nothing fake about me. And he says I won’t fight him standing. He is the one who is going to try to take me down. He’s the one who doesn’t know what I’m going to do to him.”[source]

Sounds like GSP wants to issue Kos a ‘Hulk Smash’ and doesn’t think Kos is going to like him when he’s angry. In typical GSP fashion, it appears he is not impressed with Koscheck’s performance on TUF 12. This probably means we are going to be in for a bunch of frathouse style jackassery this season from Team Kos. Now go pop some popcorn and have a seat in your blue crushed velvet recliner, remind yourself it’s all fun and games until someone puts baby batter in the ranch dressing and let’s watch the season opener of TUF 12 together tonight. [Source]