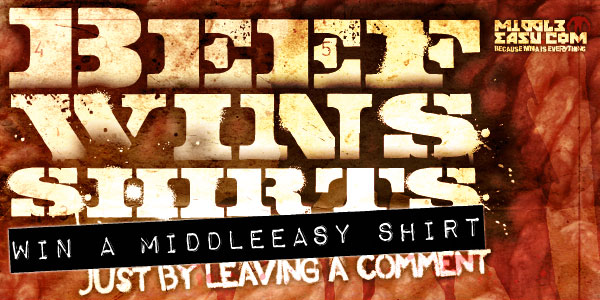 Alright, so all of this was started with two MiddleEasy users Joey Jo Jo and ChromeOnly. Ever since the Shogun/Machida fight both members have been going back and forward on the comment section which has actually been a pretty hilarious exchange. So hilarious in fact that we’re going to hold a contest. Any reader who makes extraordinary comments on the articles will get a limited edition MiddleEasy shirt delivered straight to their doorstep. We have about 40 left in stock and once they’re gone, they’re out of here. This is your last chance to grab one of these shirts. They’re comfy, light, soft and absolutely yours if you make an exceptional comment on MiddleEasy.com (And yes, you will even get one too DoucheDawg)

Start beef, make a comment. Do whatever you want but stay away from racism and gay bashing however it’s ok to pull the ‘nut hugging’ defense. If you feel like using the term ‘nut hugging’ completes your thought, then go ahead. It’s hilarious actually and the mental picture that’s formed is just enough to regurgitate your Sunday dinner. Comment as much as you like and remember, Beef wins shirts. Whether its beef with fighters, beef with users on MiddleEasy, beef with your Aunt who calls you up everyday to see if you’ve found a job, beef with MMA organizations…you pick and we will reward.

This contest will last until we’ve run out of limited edition MiddleEasy T-Shirts.