Well if Cathal Pendred doesn’t get a fight with CM Punk maybe a match with top five UFC welterweight Tyron Woodley is in his future. With a 4-1 record in the UFC, Pendred made headlines this week when he called out Punk for his hand speed or lack thereof. Punk snapped at Pendred with multiple pipe bomb tweets that expressed angry, disdain, and apathy towards a MMA fighter with a 17-3-1 pro record calling out a 0-0 cage fighting rookie.

Enter UFC welterweight title contender Tyron Woodley who hit Pendred with a verbal crack back block out of nowhere on Twitter. If there was a Go To Sleep emoji in existence, Woodley would have surely used it on Pendred.

What’s more likely a Woodley vs. Pendred fight going down or a Punk vs. Pendred fight being booked? Next up for Woodley is a 170 pound number one contender’s fight with former champion Johny Hendricks. Pendred just saw his eight fight winning streak snapped at UFC 189 and will look to climb back up the UFC’s 170 pound ladder; maybe beating up a former pro wrestler making his MMA debut will do the trick. 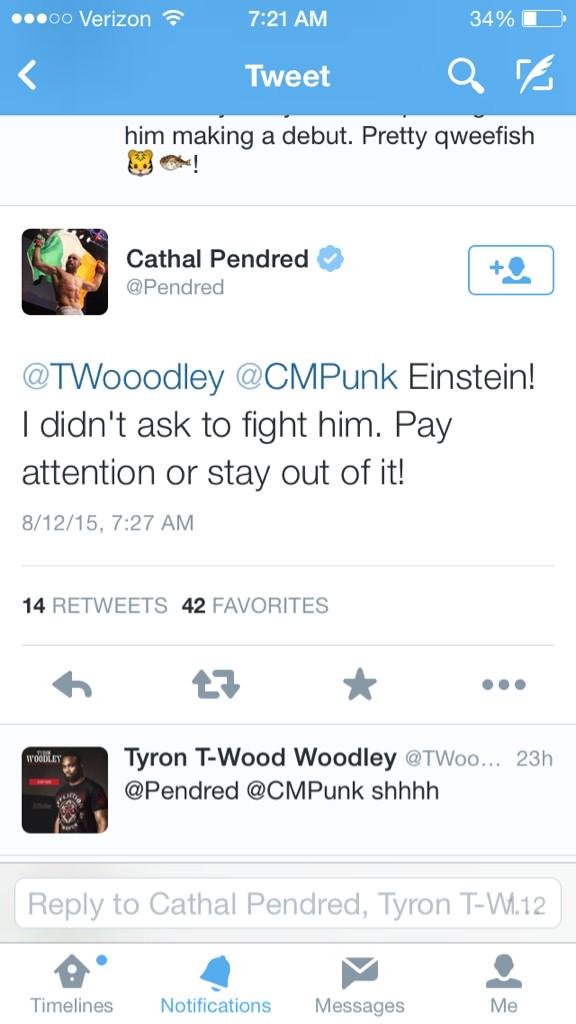 Relive the violence and blood lust of Robbie Lawler vs. Rory MacDonald with this new graphic art
Read Next Post →
Click here to cancel reply.