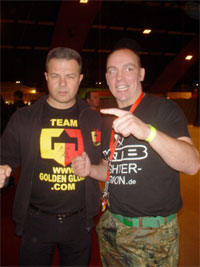 Bas Boon looks like a guy you would see guarding a weapons depot in a Guy Ritche movie. Dude is the head of Golden Glory and manager of Strikeforce’s Heavyweight Champion, Alitair Overeem (also manages Marloes Coenen, Errol Zimmeran, Semmy Schilt and a load of other K-1 guys that could left high kick your soul out of your body). Despite Alistair Overeem telling us that he will defend his belt and be ready, Bas Boon apparently has been taking lessons from Dana White on ‘How to throw verbal daggers in three easy steps’. Bas Boon hates M-1 Global. No, I don’t think you understand. Bas Boon really hates M-1 Global. Check out what he told our buds at Mixfight.nl:

“It hasn’t escaped my notice that we are dealing with a bunch of crooks who wish to brand their name onto someone who has managed to build up a successful organization on his own with a good network deal.”

“Our deal with Strikeforce was made before this bunch of robbers came along, but now we were planning on asking our money in advance. In fact, I see this as the ideal opportunity to say no to the contract that was signed earlier; we don’t want to fight on any M-mini Cons & co promotions.”

“Is this the same organization that let Tommy Depret fly to America for nothing without having the decency to phone him to let him know it was canceled?”

“I wonder what happens if Fedor loses a couple of times, or can’t fight due to circumstances, to all those enforced `Co-Promotions` that do not benefit the fighters in any way.”

Chuck Liddell is rocking a six-pack thanks to Dancing with the Stars
Read Next Post →
Click here to cancel reply.