Look there are a ton of gay fighters in the UFC. The odds of a dozen or so of the UFC’s nearly 650 fighters being attracted to the same sex are high when compared to the general population. While female fighters who happen to be lesbian appear to be much more open with their sexual orientation, no male UFC fighter has publicity stated that he is gay.

And this isn’t just a UFC pattern. Comb over the rosters of the 100% male NFL, NBA or MLB leagues and try to find a player who has come out and proclaimed his non-heterosexual orientation.

Which brings us to former UFC heavyweight champion Fabricio Werdum and the horrible trash talk he flung at his rival Junior dos Santos. When Cain Velasquez was pulled from the UFC 207 card, the MMA world scrambled to find a suitable late replacement to face Werdum on short notice. In a MMA Fighting interview with Werdum, the former champ claimed he’d fight any fighter on the UFC roster; except for JDS.

The reason? Not because fighting JDS on short notice is dangerous. Not because JDS has one punch KO power. And not because JDS has already knocked Werdum into dreamland already in the UFC. Nope, according to Werdum he won’t fight Junior dos Santos because he is secretly gay. Wait, what? Huh? Who gives a fuck about a fighter’s sexual preferences, if it’s a good fight and the fans want it, just sign on the dotted line. 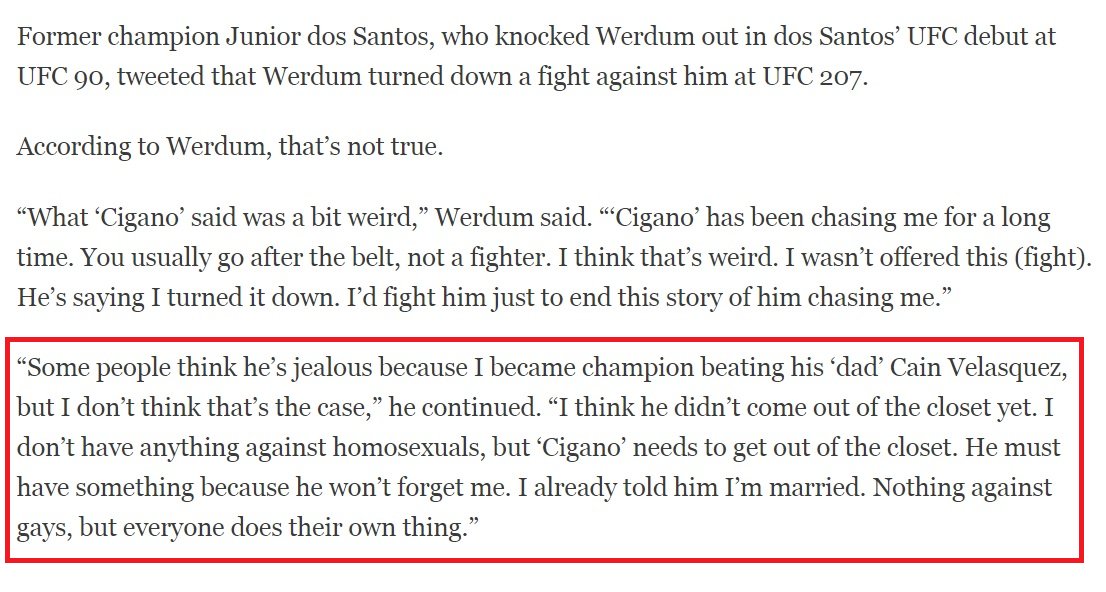 H/T to @SoozieCuzie for the screen cap

Pic: Nate and Nick Diaz now have their own rolling papers. Somebody should probably smoke them
Read Next Post →
Click here to cancel reply.