As of today, MMA is legal in every inch of North America, except one part…

I understand a few MiddleEasy readers out there may not hail from the United States, so let me give you a brief summary on what the UFC is trying to achieve told by a guy that just spilled Fruit Loops over his coffee table. For those international readers who’ve never heard of ‘Fruit Loops,’ it’s basically a sugar encrusted, artificial colored ring that will most likely give you cancer in fifteen years. See, choosing to consume something that will eventually rot out your teeth is part of our US constitutional right. In fact, it’s protected under the 13th amendment, which ‘abolishes slavery and involuntary servitude.’ That’s right, you can no longer be a slave to eating healthy. That’s why sugary cereal was invented.

The US constitution (by way of the Bill of Rights) also protects the freedom of religion, speech, and the press, as well as the right to assemble and petition the government — that’s the 1st amendment. Back in 2011, ZUFFA filed suit against New York Attorney General Eric Schneiderman and Manhattan District Attorney Cyrus Vance Jr in a claim that the ban of MMA in New York was violating the first amendment.

It was all about the wording of MMA, specifically the ‘arts‘ in mixed martial arts. ZUFFA was claiming that New York was preventing MMA fighters from artistically expressing their talent, which according to ZUFFA, was parallel to a painter being unable to construct a masterpiece on a canvas or a band not being allowed to perform at a nightclub. It marked the first time in American history that a professional athlete claimed their ability to communicate with an audience was protected under the first amendment.

Guess what happened with the lawsuit. Nothing. Absolutely nothing.

Even though just hours ago Canada’s Parliament passed Bill S-209 which legalized professional MMA throughout all of Canada and Connecticut became the 49th state to legalize MMA in the United States of America — MMA is still banned in New York.

Since we can’t wrap our ADD minds around the concept, we’ve provided a handy map of how ridiculously childish New York politicians are being.

Further proof that not all the Fertitta money in the world can remedy stupidity. 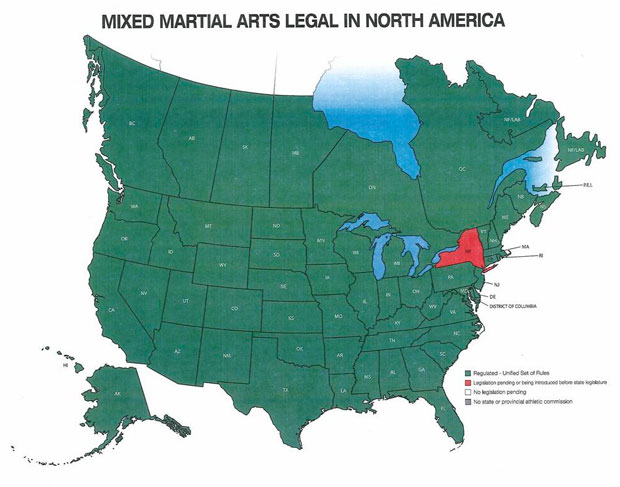 Relax your brain and let Josh Barnett predict Fabricio Werdum vs. Big Nog for you
Read Next Post →
Click here to cancel reply.