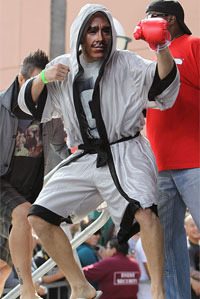 In 1993, fighters used to learn MMA by trial and error in live competition. That’s as raw as learning how to drive for the first time on the 405 freeway in Los Angeles. To elevate the level of rawesomeness, Art Jimmerson did it while wearing a single boxing glove so he wouldn’t break his hand attempting to knock a Royce Gracie out at UFC 1. If you didn’t see the fight because you weren’t born yet, or because your parents wouldn’t let you order the pay per view, it went down a lot like James Toney’s attempt at Randy Couture earlier this year, except Jimmerson tapped out before Royce Gracie even attempted a submission. The boxer showed the world exactly what not to do in a fight against an elite Brazilian jiu-jitsu practitioner before any of you even knew what MMA was, and nobody has repeated the mistake again.

There are probably a lot of things you can learn from Art Jimmerson, and you can do it at the new UFC Gym in Rosemead, California – where the former pro boxer will be offering striking lessons at an hourly-rate. Although the man never fully transitioned into MMA, he has 51 professional fights as a boxer. The dude is engrained in UFC history as being the first decorated boxer to ever attempt an MMA bout, and he did it in his physical prime. In theory, there was really no point of paying James Toney to show the world in 2010 what Art Jimmerson already taught us in 1993, but we’re happy they did.

At the end of the day, these dudes were great boxers who did the rest of the world a favor by putting caution tape around the sport of MMA that should only be visible to other boxers. Any other guys who want to transition MMA from a pure punching sport will eternally think twice or do their due diligence brushing up on their takedown defense. Luckily, a membership to the UFC Gym includes Wrestling, Jujitsu, and Muay Thai lessons. Think of all those disciplines as essential condiments on a Chicago-style hot dog, that when combined properly. are a recipe for success. After you eat that hot dog, watch this video of Art Jimmerson vs. Royce Gracie. [Source]

If you had any doubts that Golden Glory is taking over, check this out...
Read Next Post →
Click here to cancel reply.