Antonio McKee says if his next fight goes to decision, he will retire 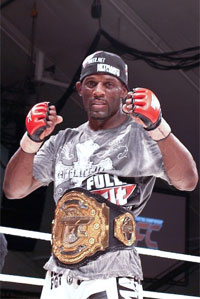 In McKee’s 24-3-2 MMA career, eighteen of those wins have come via decision. Regardless of how he obtained those victories, people still fail to realize that he’s only lost twice in eleven years. In fact, his last L was delivered by ex-UFC’s Karo Parisyan before the whole painkiller addiction nonsense. While we’re on the topic of Karo Parisyan, let’s segue to Dong-hyun Kim, Parisyan’s final opponent in the UFC before Dana White claimed that Karo ‘[Expletive] the UFC’ and was ‘permanently banned’ for pulling out of UFC 106 a day before the weigh-ins. Well damn, now that we’re on the topic of Karo Parisyan, let’s segue over to Dong-kyun Kim again. After his second bout at Spirit MC 5, Kim retired from MMA at the age of twenty-four. Within two years, Kim was back in the ring knocking out a potpourri of opponents in Japan. Hopefully this is similar to what Antonio McKee intends to do.

In today’s MFC press release, Antonio McKee said that if he goes to a decision against Luciano Azevedo at MFC 26 on September 10th, he’s going to retire from the sport.

“I’ve said before that I will fight differently but I was still cautious. Not anymore. I am going to destroy Azevedo … I will mess him up. If it goes to a decision, I will leave my gloves in the ring and walk away”

Granted, Antonio is forty-years old which is about the age range that most of us have never contemplated reaching. In a perfect world, we would see a four-man tourney between Antonio McKee, Eddie Alvarez, Gilbert Melendez and Katsunori Kikuno before any of those guys considered retirement. However, we don’t live in a perfect world. The closest thing we have to perfection on this planet are buffalo wings and ranch sauce.