Ah, the ever-mysterious UFC 205 continually trods forth from the mysterious dark of ambiguity. Which is just a more poetic way of saying that the New York card is coming quick and we don’t have shit. The heavily rumored Conor McGregor and Eddie Alvarez fight has been whispered, but everyone was counting on the anchor of Daniel Cormier fighting Anthony “Rumble” Johnson for the UFC Light Heavyweight title.

Frustrated by the lack of announcements, Rumble decided to take the action upon himself and publicly call out Cormier (and the UFC) to see what the hold up is. 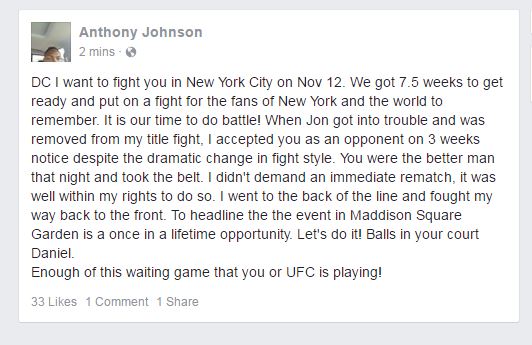 It didn’t take long after that for Cormier to respond, but it wasn’t good news.

u deserve shot. I'm not waiting! Sorry bud NYC won't happen. But you can get it again Dec 30th. #downgoesrumble https://t.co/QdZeOFtiHk

It looks like Cormier won’t be ready by November for a fight with Rumble. No word on if it is a bugging injury, if it is the big weight cut, of if he just wants to be on the card with his best friend Cain Velasquez. Rumble ain’t taking no excuses though, and makes a Bob Sapp reference!

December 30th I'll be waiting for ya. No wrestling! I'll give u a shot! #howamisogiving I'm gonna knock you out! https://t.co/rUY0bSVflW

Cormier insists on UFC 207 though, which is December 30th so Rumble can enjoy Christmas. He promises this time will there will be “no wrestling”! I don’t know about that, a strategy with no wrestling may give Rumble a late present.

Boy stop playing with your ding ding and thinking you can knock me out 😂😂😂😂 https://t.co/7SLdFY2xBs

I'm not fighting for a stankass interim title…

It seems like Rumble got that KO power in those tweets too, telling Cormier to stop playing with himself and fight him for that belt. After all, he ain’t fighting for the Stankass Interim title!

Video: Go Ahead and Get Hyped for the Rumored Conor McGregor and Eddie Alvarez UFC 205 Main Event With This Fan Trailer
Read Next Post →
Click here to cancel reply.