Andrea Lee’s Husband & Coach Donny Aaron Has Nazi Tattoos, Says Removing Them Is Impossible, Also He Once Killed a Black Man in His Driveway

Sit down, Middle Easians, for a long sordid tale that could only find a home in the world of Mixed Martial Arts. It’s been a long weekend for Andrea Lee’s MMA coach Donny Aaron.

Sometime Friday. the MMA Hivemind discovered this image of UFC fighter and former Legacy champion Andrea Lee with her husband and head coach Donny Aaron enjoying a nice day at the lake. But a close inspection revealed a sinister presence on his upper forearm. 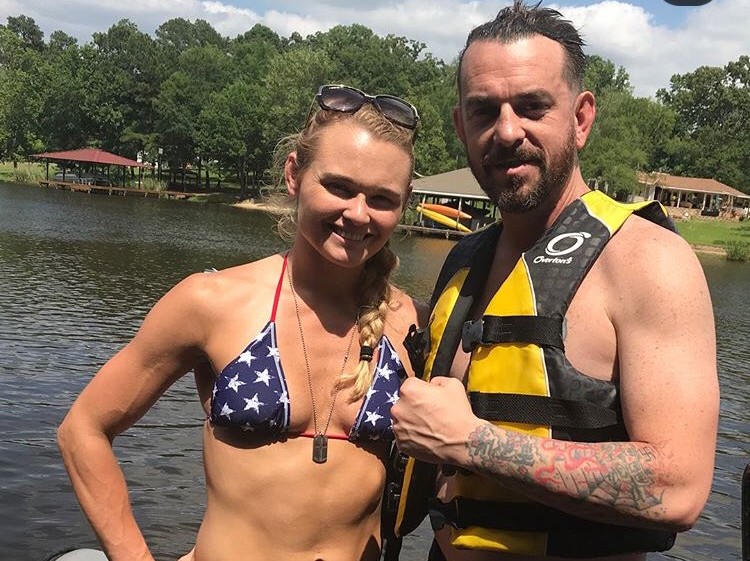 Yes, that is indeed a swastika. And just in case you thought it was a weird angle or some kind of optical illusion, it seems like he has an SS tattoo on the other arm. The SS were, of course, Adolf Hilter’s paramilitary unit, the Schutzstaffel. They were responsible for the Jewish Holocaust during WWII. 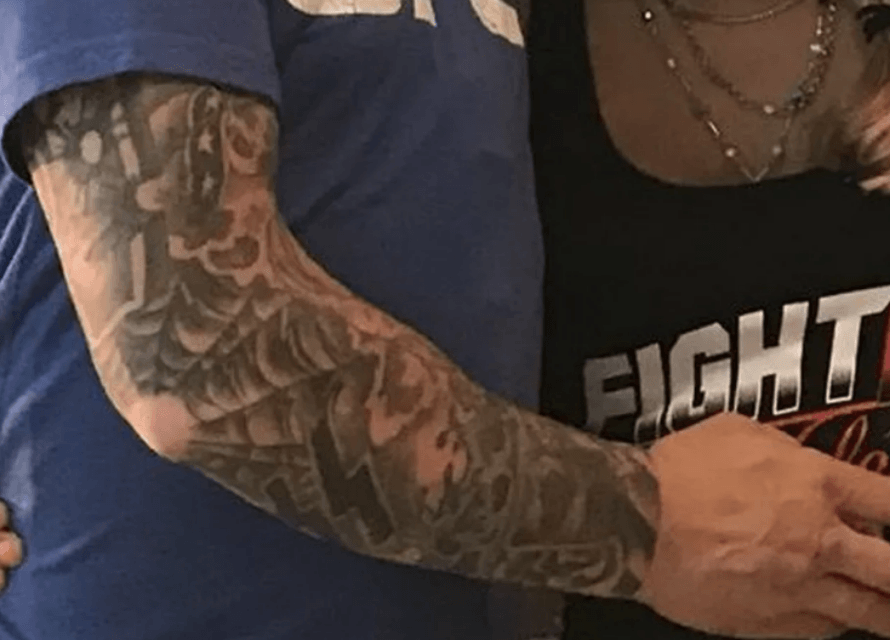 Naturally, there was a vocal contingent of MMA fans demanding an explanation of why a coach involved in MMA’s premier organization would be endorsing Nazism and white supremacy. Plenty of Andrea Lee’s own fans seemed taken aback and wanted an clarification.

Cue this response from Donny Aaron regarding his set of white hate tattoos.

How can a tattoo cover up not be an option? I’ve seen completely blacked out tattoos. In no way is keeping that tattoo not completely optional. Any time he’d like to have that removed, he could. So, yeah, I’m calling bullshit on that response Donny.

As for everybody deserving a chance to try and change their life, I couldn’t agree more. So I truly hope he is a different person and has changed his life. But part of turning over a new leaf needs to include a recognition of just how terrible the ideology of Nazism are. And unfortunately, Andrea Lee and Donny Aaron’s further comments and defense of the tattoos seem to indicated that they don’t recognize how seriously disgusting the ideas represented by those tattoos are.

For the record, you are not a “sensitive ass mofo” for being shocked that the head coach of a UFC fighter has Nazi tattoos. Getting an SS tattoo in jail is not a small thing you just shrug off. At least, it’s not something you should shrug off.

But I will give some credit to Donny Aaron who is seeming to realize just how serious this issue is and that it requires a thoughtful response and apology.

In case the tiny font is too much for you, here it is transcibed:

Please read this and accept my most sincere apologies to all I have offended when the photos of my tattoos became public. I’d most like to apologize to Andrea and my brother Kendrik (both pictured) for putting them in a position to feel the need to defend me when there is no defense or justification for the abhorrent tattoos that I ashamedly wear. I’d also like to apologize to her employers at the UFC for bringing them shame and embarrassment. Not least of these I apologize to MMA fans world wide for giving the sport a temporary black eye and for offending so many of those who’ve supported us for years. And to all of the elite pro fighters I’ve been blesses to work with I pray this doesn’t change your opinion of me even through most of this groups know my story.

Furthermore, I’d like to apologize to Andrea’s sponsors who were certainly blindsided by this as were many. Know that I only offer reasons, not excuses or justification for the choices I made in my 20s. My body is covered in tattoos that tell the story of where I have been, what I’ve gone through and what I’ve overcome. These “scars” tell my history which include a dark time when I was in prison. However, they do not accurately represent who I am today as a person, my personal belief system and the respect I have for people of all races and religion. For 13 years I have tried to atone for my sins and seek forgiveness from those most certainly find my body reprehensible. I’ve, in most cases, gone to great lengths to always wear long sleeves in public setting. The photo posted was complacent error in judgment as my excitement and not thoughtfulness ruled that day.

Many of you have offered solutions to my problem: Coverups, laser removal ect. Please trust me when I say I’ve explored both avenues and unfortunately neither is an option for me. In the meantime, I understand that many won’t forgive me and don’t believe in second chances and to you I say, ‘I understand’. I don’t deserve forgiveness and I’m certainly not asking for sympathy. If however you do believe in forgiveness, then I promise it won’t be wasted on me. I am a different human being un my mid 40’s that I was in my 20’s.

As a final statement to Andrea’s character, it’s with certainty that I can promise you that she didn’t marry a racist. When Andrea and I met, I had already began to reinvent my life and if she’d seen any racist behavior or attitude she’d have never given me the time of day. Instead, she met a man who was and still does speak to at risk youth, who goes and speaks to inmates, who is active in his church, and who has always offered pro bono training to physically challenged and unprivileged youth.

My life has become very culturally diverse and Andrea stared right passed my tattoos [and] at the man I’ve become. I can’t offer many solutions but I do offer this: Unless you go digging up old photos of me, you’ll never see my tattoos again. I’d rather hold the camera for Andrea, the real star anyway. Again, I offer myself as a humble and apologetic man.

Please don’t let the sins of my past define my future. Please don’t let your hatred over me bleed into hatred toward Andrea. If you have to hate someone then please hate me. She doesn’t deserve it. She is genuinely the best person I know.

Unfortunately, this apology doesn’t really address everything when you know the whole story. Yeah, this story only seems to get darker. It seems that the prison stint when Donny Aaron received his Nazi tattoos stem from an incident in which he shot a black man who was hanging out in his driveway. He shot the victim seven times, but still claimed self-defense, despite the fact that no gun was found on the victim. Even as a former police officer, Aaron’s story lacked credibility and the jury found him guilty of a lesser charge in three hours. Guilty of Negligent Homicide basically means he chose to take the life of a man who poised no danger to him.

This makes Donny Aaron’s story of necessary jail house tattoos and of a life remade a bit harder to shallow. If I went to jail for killing a black man and it truly was self-defense, I don’t think I’d willingly get Nazi tattoos put on my arms. And if by some case of bizarre necessity, I was forced to get them for some kind of jailhouse protection (doubtful as Aaron was a former cop), upon my release, I would make it a top priority to have those tattoos removed or covered up. And I definitely wouldn’t make up some bizarre excuse about how covering them up would look “redneck”.

Video: Not Hyped for the Idea of Conor McGregor vs. Khabib Nurmagomedov? This Fan Made Trailer Will Make You Throw a Dolly Through a Bus Window
Read Next Post →
Click here to cancel reply.