Andre Dida was shot in the head, survived, and continues to train 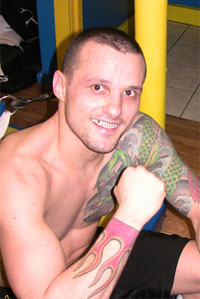 Shane Carwin had his head surgically punctured by a doctor to repair nerve damage from his November 2nd corrective back surgery. On the opposite end of the globe, Andre Dida had his head accidentally punctured by a stray bullet outside of the gym he teaches muay-thai at in Canada. With an introduction like that, you would expect that guy from Unsolved Mysteries to narrate the rest of the article. RIP to great late-80s television shows, those things taught me everything I needed to know about morality, casuistry and how to cut one hell of a memorable TV introduction.

As Andre Dida and his brother were getting into one of his student’s car, an argument erupted outside of the front of the gym and resulted in a stray bullet grazing the back of Dida’s head. The group sped away to the nearest hospital and Dida managed to get the bullet wound sutured with ten stitches. Just to give the proverbial middle finger to his attackers, the guy is already in the gym training for his upcoming K-1 Max bout.

“For everyone who supports me, rest assured because I am well trained and will give my best to represent Brazil and people that support me. The fact that occurred did not remove me from my goal, only made me stronger. I thank God for being alive and for allowing me to continue my path, “

Andre Dida’s skull laughs at your attempt to accidentally kill him. Huge props to Rickson Gracie for donating some of his aura to save Andre Dida’s life. [Source]