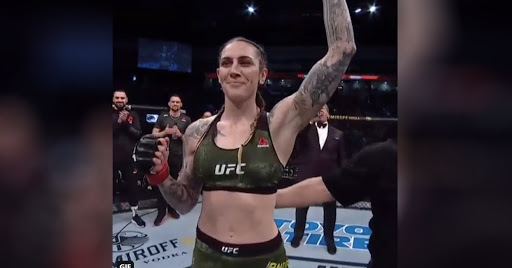 Megan Anderson Viciously KO’s Norma Dumont Within One Round

A women’s featherweight fight between both Megan Anderson (10-4) vs Norma Dumont (4-0) is featured on the main card.

No touch of the gloves and the ladies get straight to the action.

A confident Dumont walks straight into Megan’s range. Norma then gets double underhooks and presses Anderson against the cage in search of a takedown.

Not much action transpires as the ladies continue to jockey for position against the fence. Anderson defends the takedown attempts well and reverses position.

Norma lands a solid knee in the clinch and searches for a single leg. However, Megan reverses the attempt and gets backs back to her feet. Both ladies make their way back to the center of the octagon.