Newly crowned bantamweight champion Aljamain Sterling has been dealing with a ton of backlash with the way that he captured the title. In particular, he was unhappy with the comments from John McCarthy and Josh Thompson, and decided to fire back at the former referee and fighter.

Without a doubt, Sterling has one of the most complicated and tarnished title wins in UFC history, although it is no fault of his own. When he was facing off against Petr Yan, the then-champ illegally kneed him in the head, severely rocking him and forcing the fight to be called a DQ win in Aljo’s favor.

Since that fight ended, the new bantamweight king has been dealing with a barrage of haters on social media, questioning the validity of his reign as champ. That is not to mention the seemingly never ending back and forth between he and Yan.

TJ Dillashaw Is In For A Rude Awakening

Speaking with MiddleEasy, Aljamain Sterling made it clear that the rematch with Petr Yan is going to be next. However he is confident that the second time around, he will win in a much more decisive way.

However another possible contender for the throne is returning former champ TJ Dillashaw. He has to get through Cory Sandhagen first though, and Aljo is not exactly sure that the former champ can do that without the substances that he may or may not have been using.

“I think he’s going to look good from a technical standpoint cuz he’s he’s a very technical guy the way he throws his combinations He almost fights like it’s a video game, he does combinations like he’s pressing buttons on a controller,” Sterling said.

“I just think with all the rumblings from the past and the press conference where Cody Garbrandt confirmed that he was trying to teach everyone at the gym how to do the steroids or the EPO whichever one it was, it goes to show how many years he’s been cheating.

“I don’t really know how good he really is without that stuff. He may be a technical guy, but in terms of his aggression and everything, that can all be coming from the stuff that he’s injected into his body. So it’s really hard to (give) that assessment really know exactly where he’s at,” Sterling continued.

“I think Cory Sandhagen’s pretty damn good. He’s got the range, he’s got the height I think he’s going to be a tough fight for (TJ) and I’m interested to see how this one goes… I think you lose something when you’re not on the sauce, whether it’s cardio where the strength… I don’t know, I think it’s gonna be a tough out for him.”

Recently TJ Dillashaw said that he was preparing to face Petr Yan for the title, rather than Aljamain Sterling, essentially picking Yan to win the rematch. While Aljo was not exactly surprised to hear that, he says that both men are in for a surprise when the second fight does go down.

“Skillset-wise, I don’t think he’s a better fighter than me. If that was the best him, he hasn’t said he was off for anything, so if that’s the best Petr Yan, I like my chances in the rematch. That’s all I can say.

“Because when I get in there with (TJ) it’s going to be something serious. That’s if he even gets back, he’s got to get past Cory Sandhagen first. I don’t like to count my chickens before the eggs hatch, I’m just kind of just riding this wave and whatever happens, happens.”

Someone else who looked ultra impressive in the bantamweight division that Aljamain Sterling reigns over, was Sean O’Malley. Following a setback to Marlon Vera, the Suga’ Show got back on track with a big knockout over Thomas Almeida.

However to Aljamain, he does not feel like O’Malley ever really went anywhere. He feels like people just wrote Sean off a little too soon, after what was essentially a one-in-a-million knockout loss.

“I don’t think he’s ever left. I I think people kind of wrote him off a little bit too soon after the Chito fight,” Sterling said.

“I thought (the Almieda fight) was a really fun fight. Almieda gave him some pushback, not too much. I think he kind of just charges and loads up a little bit too much, which makes it easier to see. He’s not giving any fakes where O’Malley’s faking the whole time…

“I think (O’Malley’s) the real deal. We don’t know how good he is off of his back yet, but in terms of the feet and his footwork, he’s a tough out for a lot of people because he’s long, he’s rangey, and he knows how to move on to feet.”

Some called this knockout the greatest KO in bantamweight history, but Sterling does not necessarily agree. While he is onboard with it being up there, he says there are others that are better, even including the one he suffered at the hands of Marlon Moraes.

“I don’t know man. I mean I would even argue maybe like TJ Dillashaw vs Cody Garbrandt is up there, you have John Linekar vs Michael MacDonald that’s up there, you even have the Marlon Moraes fight with with myself like even that knockout was pretty ridiculous,” Sterling said.

“I mean it was it was slick. (Sean) caught him coming in with straight left, and then he fell down and (O’Malley) kind of did a walk off, and then walked over and just kind of gave him a Dan Henderson H-Bomb. Yeah it’s up there.”

Sterling Goes Off On Big John McCarthy and Josh Thompson

There were a lot of people who had some negative things to say about Aljamain Sterling and the way the fight with Petr Yan went down. Not least of these were Big John McCarthy and Josh Thompson.

On their podcast, the former referee and UFC fighter essentially accused Aljo of playing up the injury from the illegal knee. This is something that really bothered Aljamain, a fact that he made very clear.

“When you see a guy like John McCarthy, who’s supposed to be the standard of refereeing and officiating and he’s been around since the beginning of time of the sport, I think when you have him giving out these false narratives and painting a picture, where it makes me look like I quit, or makes me look like I took the easy road out, or the coward’s way out, kind of like this is Call Of Duty or something, there’s something to be said about that,” Sterling explained.

“I think his ego has gotten super inflated. When you’re a guy who’s doing stuff as a referee, #AskBJM, that says a whole lot about your persona and what you’re in the sport for. Are you really looking out for the interest of the fighters, or are you just worried about how people perceive you?

“I understand it from the fans because they don’t know, but Josh Thompson who’s been kicked in head, when he was kicked in the head by Yves Edwards, was he faking it then? He was standing when he got kicked, and he dropped. Was he faking that he got dropped?

“I was sitting down on a knee, I didn’t see the shot, he was stuffing my head, I was trying to get his hands off of my head so that I can get a clear way to get up to my feet, I get kneed in the head and all of sudden I’m faking? It’s actually laughable that someone of his stature can actually comfortably say something like that.”

Aljamain Stelring will eventually have his chance to silence the doubters and secure a definitive win over Petr Yan. While there is no real timetable yet for when that fight will happen, he is anxious awaiting the chance. 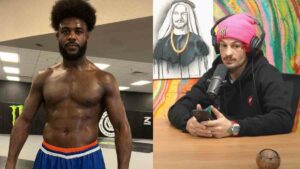