Alistair Overeem is now in the Guinness Book of World Records

Let me tell you a quick story about a guy named Sir Hugh Beaver. Sir Hugh Beaver not only has a name I want to repeatedly say, but he was one of the original purveyors of The Guinness breweries in Ireland. One balmy Irish day, Sir Beaver went out drinking and hunting game with his buddies, which is always a safe combination. The conversation amongst friends lent itself to the speed of game birds, particularly the golden plover and the grouse, and which was faster. This is when they said the [expletive] got real. Which bird was faster? Answers were demanded, but statements were dismissed with the waves of hands and the spilling of beer. Fueled by testosterone, dark ale and Irish will, The Beav, needed to prove to himself and others which bird was faster and went so far to invent The Guinness Book of World Records. That’s a heavily summarized and stylized version of the facts, but think about that the next time you and your little buddies are enjoying a black and tan, arguing how Kobe is better than Michael (he isn’t). Sir Hugh Beaver, the one guy you probably never want to get in a battle of wills against, and also the guy responsible for making the dude with really long nails a star.

Now Alistair Overeem will be placed into the Guinness Book of World Records along with the aforementioned long nail guy and the guy who holds the world record for standing in a corner. Overeem becomes the first ‘man’ to consecutively hold three active titles in combat sports. Check out the CagePotato scoop and get an answer to the corner standing record after the break.

Alistair Overeem earned more than the uber paycheck and the interim DREAM heavyweight belt in Japan at the K-1 Dynamite!! 2010 New Year’s Eve event. The DREAM, Strikeforce and K-1 Open Weight Grand Prix champion also secured a spot in the Guinness Book of World Record as the only fighter to consecutively hold three championship belts.

If it’s any consolation to Todd Duffee, who reportedly made $60,000 for the 19-second pounding he took from “The Demolition Man,” his name will also be inscribed in the tome as the fighter who Overeem beat to set the record. At least there’s that.

So, about the corner stander. There currently isn’t a world record for corner standing, I played you. But hopefully, a few people can take something from Hugh Beaver’s gumption and dedication. Go put on a MiddleEasy shirt, stand in a corner and set a new world record, and then report it here. [Source] 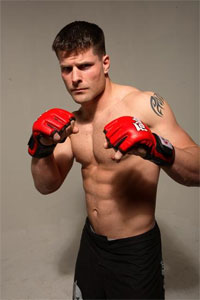