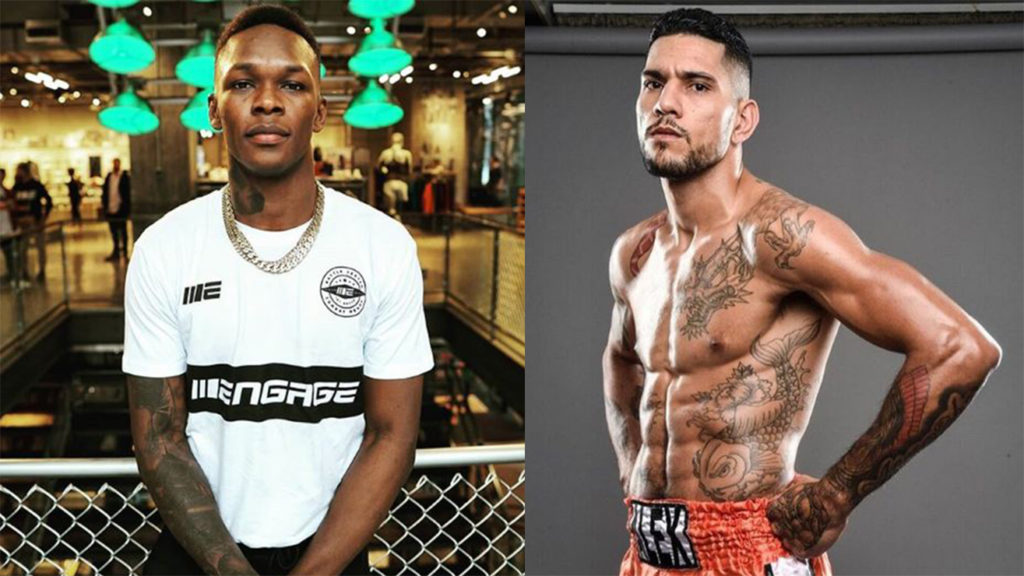 Alex Pereira, Glory Middleweight Champion And The Only Man Who Put Israel Adesanya To Sleep, Wants To Return To MMA

Israel Adesanya has a UFC score of 4-0 after an outstanding KO victory over Derek Brunson at UFC 230 on November 3, 2018. He seriously threatens to climb to the top of UFC Middleweight division. But Alex Pereira, the only man who put him to sleep, intents MMA return!

Alex Pereira (39-6) is the current Glory Middleweight champion. The Brazilian has a kickboxing score of 2-0 versus Nigerian-born New Zealander. The first time, “Poatan” won via unanimous decision in April 2016. They fought again in March 2017, when Pereira knocked “The Last Stylebender” out cold via a great left hook! Pereira described their second fight thoroughly. (via MMAFighting.com)

“Adesanya kept saying he didn’t lose the first fight, he didn’t accept the loss,” Pereira tells MMA Fighting. “The rematch, the first round was back and forth. The second round, he connected a good hand that rocked me. I was getting beat for two minutes, but my body was resting. Not that I wanted to, he was imposing his will, but my body was resting and he was getting tired. He put a lot of pressure but couldn’t drop me.

“We went to the third round and he was tired. He was winning the fight, but I told my corners I was going to knock him out. It wasn’t luck, I knew I would knock him out. I moved straight forward and used the straight right and left cross, good weapons I have. It wasn’t luck. It landed on his chin and he couldn’t take it. He had a few rough days after that.”

Few months after the hard defeat to Alex Pereira, Israel Adesanya won Melvin Guillard via TKO in an MMA bout to win the AFC Middleweight title. He improved his perfect MMA streak to 10 consecutive wins. He later defeated Stu Dare and signed the UFC contract with the score of 11-0.

Alex Pereira fought three times in MMA under Jungle Fight (a Brazilian MMA promotion) banner. He earned the score of 2-1. Pereira was defeated in his first match via submission on October 24, 2015, but he successfully put both of his rivals to sleep in 2016.

Alex Pereira praised Israel Adesanya. He said the New Zealander was very good rival due to his superb combination of precision, distance, and defense.

“It’s complicated for any tough MMA fighter to fight Adesanya because he’s really good,” Pereira says. “His distance and defense are his differential. Other fighters don’t have a defense that good. Adesanya is very precise, he just moves his head a few inches to escape from strikes and he’s already back in range to attack again.”

Alex Pereira is under contract with Glory until April 2019. He wants to join MMA. Yet, he is ready to wait for his contract to expire if the kickboxing promotion refuses to let him go.

“I’ve received two offers from big MMA promotions and we’re analyzing them,” Pereira says. “I want to go to MMA. I don’t know where I’m going, but if Glory doesn’t let me go, I’ll wait until my contract is over.”

Alex Pereira defended Glory Middleweight belt versus Simon Marcus in September 2018. At the moment, he wants to focus on MMA return. He has a message for everybody who thinks he hurries too much. And he has some big plans too!

“When I fought Adesanya (in kickboxing), I only had 20 or so fights and he had 80. If I were to think like that, I would have been crazy to fight him, and I beat him twice,” Pereira says. “I’m sure I can do a good job in MMA. I’m not young, of course. To become a complete, well-rounded fighters, it would take me 10 years, but I’m evolving every day I train, and I evolve fast. I’m stronger than (Adesanya). At the weigh-ins, I would tell him ‘if you take me to the ground, I’ll know you’re scared of my hands.’ And I’m no fool on the ground.”

“I want to be known, I want to show everyone that someone who was born and raised in a favela can reach the top, can reach the highest level,” he continues. “I never moved to another country to train and became champion at Glory. That’s great to show that everyone can achieve great things.”

Would you like to see Alex Pereira Vs Israel Adesanya 3? Do you believe “The Last Stylebender” could revenge?