AJ McKee Used To Do The ‘McKee-otine’ As A Kid: ‘My Dad Used To Hate That Move’ 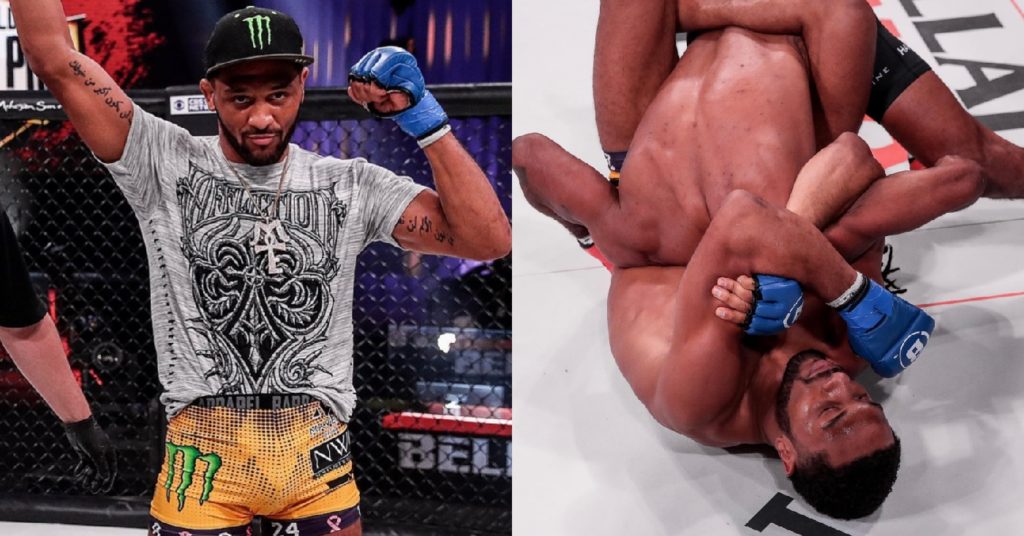 Last week Bellator featherweight standout AJ McKee scored one of the most unique submissions seen in a while. Yet to him, this was a move he has been pulling off since he was a kid.

As the son of UFC and Bellator alumni Antonio McKee, AJ has had a lot of intrigue and hype surrounding his MMA career thus far. For the most part he has delivered on this, going undefeated in 17 pro fights. However many expected his most recent contest the toughest of his career, taking on Darrion Caldwell in the Bellator Featherweight World Grand Prix Semi-Finals. Yet in the end, AJ would need less than a round to finish the fight, securing what is likely the top contender for submission of the year, a choke from his back that was later dubbed the McKee-otine.

Despite the fact that this submission was fairly new to the MMA world, it was something that AJ McKee has been apparently doing for a while. Speaking in a recent interview, he explained that he has been catching fools in this headlock since he was a kid. In fact, it was a submission that his father was not particularly fond of.

“It’s funny, my dad used to hate that move,” McKee laughed. “I used to do it as a kid. It’s a mix of a front headlock with a chin whip. So I used to get caught on my back doing chin whips (while) wrestling. So once I started doing jiu-jitsu I started finding little ways to maneuver the body.

“A lot of people call it the Hunter Pass, so they use it as a sweep from there. Me knowing how the body moves and just trying to neutralize what you’re doing, I know if you lock the body triangle around the waist, they can’t roll. So at that point you get the full arm-lock undertook, and it’s in there deep. You just kind of torque it back and it bends the body in a really uncomfortable position.”

AJ McKee goes on to explain that he was impressed with Caldwell’s takedown speed, but he knew from the moment Darrion put his head to the side, that he could get the submission. Regardless of how long he has been doing the move, it was still impressive to see against someone of a fairly high caliber.