Fabricio Werdum submitted Fedor Emelianenko. To this day, I can’t believe I can type that sentence and still be telling the truth. In a parallel universe in an alternate timeline, Fedor Emelianenko defeated Fabricio Werdum. He’s still undefeated and every MMA site has him as the pound-for-pound best fighter in the sport. In that same parallel universe, Sarah Palin is the President of the United States, the Sneaker Pimps are still recording albums and ‘Salute your Shorts‘ is still on the air. That universe exists, but it’s not the one we reside in.

For some reason, people forgot that Werdum was the first guy to defeat Fedor. Prior to UFC 143, that delusion influenced many MMA fans that were in attendance inside the Mandalay Bay event center. Within five seconds of the first round, fans starting their traditional ‘USA’ chants, but jingoism was just not enough for Roy Nelson to defeat Werdum. In fact, Werdum swept every round in a 30-27 unanimous decision over the winner of TUF 10 (better known as the greatest TUF season of all time).

As many of you mentioned on Twitter, Werdum did better against Nelson than Junior dos Santos. I’m not sure what that equates to in MMA math, but we’re assuming you’ll need a scientific calculator to figure it out. Be sure to show your work, too. 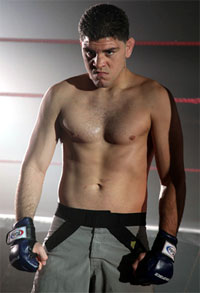 So here's what FightMetric tells us about Nick Diaz vs. Carlos Condit at UFC 143
Read Next Post →
Click here to cancel reply.