After the cancellation of UFC 151, Jay Hieron officially has the worst luck in MMA history

At the end of time, the universe won’t remember that one time you stubbed your toe against your coffee table, accidentally hit on your girlfriend’s best friend, got stung by a swarm of bees as you exited the YMCA outdoor pool, lost all of your left socks in your laundry, got food poisoning at your favorite Mexican restaurant, were randomly selected to be strip searched by airport security, opened your mouth while you were riding your bike and swallowed an insect, slipped on a banana peel and slammed your heard against concrete, or even lost a pivotal game of paper-rock-scissors. The simple fact is that your bad luck pales in comparison to that of Jay Hieron. In fact, Hieron’s bad luck will beat up your bad luck and steal its lunch money — it’s just that vicious. Now that UFC 151 has been canceled, we thought it would only be appropriate to break down exactly why Jay Hieron is the unluckiest fighter in MMA history.

Hieron rocked it in the International Fight League and became IFL’s first welterweight champion. He even defended his belt against Mark Miller with a first round TKO. Hieron was the reigning badass in IFL and literally overnight, the entire organization disappeared. Hieron was left with a giant metallic belt that didn’t really match with anything in his wardrobe, so he went to fight for Affliction in ‘Day of Reckoning.’ After serving Jason High a brutal first round KO in just over a minute, everyone in Anaheim sort of stood there in silence. It was as if they witnessed the detonation of the atom bomb all within the confines of a padded ring. That night, everyone saw what Hieron does on a daily basis; he cleans up competition and mops the floor behind him. Jay was scheduled to fight in that mythical event known as Affliction: Trilogy against Paul Daley but — well, let’s just say we all know what happened with that.

Jay was out a paycheck and had no organization to fight under. UFC propositioned him to sign with their promotion but Hieron, who just signed with EA Sports MMA, refused their offer and chose Strikeforce instead. Hieron’s decision was primarily based on an instant title shot Strikeforce offered to him against Nick Diaz. The universe was finally aligned to give Hieron what he deserved, and then the universe decided to urinate on his future once again. Diaz intentionally missed the CSAC drug test forcing him to drop out of the fight and the title shot scheduled for Hieron was demoted to a non-televised, regular welterweight bout. That night, Hieron got drunk off his ‘I’m a complete badass’ potion and won a convincing unanimous decision over Diaz’s replacement: Jesse Taylor.

Everything seemed to be squared away for another shot at the title. It seemed as if Jay Hieron redeemed all of his ‘bad luck coupons.’

Hieron was shafted for a title shot when his agent, Ken Pavia, turned down a fight with Marius Zaromskis because ‘he didn’t think his name was big enough.’ Damn. Instead, Strikeforce paired together the Dream Welterweight GP champion with Nick Diaz for the Strikeforce welterweight title. Strikeforce decided to grant Jay Hieron a fight with Joe Riggs which was supposed to be televised but was bumped to an undercard when Wes Sims decided to step up and face Bobby Lashley. Jay Hieron was relegated to a non-televised, undercard bout, again. EA Sports tried to ‘white knight’ the situation by broadcasting the Joe Riggs vs. Jay Hieron fight on their site as a live webstream. Their intentions were noble, but it was a complete friggin’ disaster. The only thing the world saw was a grey loading box repeat every 60 seconds. 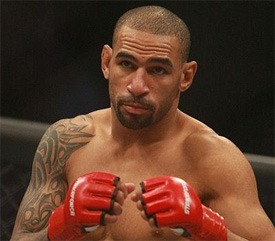 After Strikeforce Miami, Jay Hieron kept a relatively low profile in the MMA world. Or perhaps it is the MMA world that kept a relatively low profile on Jay Hieron. Alternatively, it could be the perceived profile of Jay Hieron oppressing the profile which he could establish in the MMA world. Regardless, Jay Hieron spontaneously informed all of us that he was released from his Strikeforce contract (after going 2-0 in the promotion) on August 2010 and then subsequently implied that ‘we know what he’s about to do next.‘ Everyone assumed that he was going to fight in the UFC, however at that point, if a stray asteroid hit Jay Hieron’s car, it wouldn’t even compete to the amount of bad luck the dude endured over the past few years.

On November 2010, it was announced that Jay Hieron signed with Bellator and that he would participate in their season four welterweight tournament. Jay Hieron advanced to the second round by submitting Anthony Lapsey (a guy that looks incredibly like RZA) in the first round, and then went on to win a unanimous decision against Brent Weedman at Bellator 40 and a split-decision win over Rick Hawn at Bellator 43.

Great. Hieron would finally get a fair and honest shot against another title holder, this time the Bellator welterweight champion Ben Askren. The title bout happened on October 29th 2011 — and it went down as one of the most controversial title fights in Bellator history. In the end, Hieron’s bad luck prevailed, which resulted in a split-decision loss against Ben Askren. After the confusing bout, we caught up with Jay Hieron and even he was perplexed at the decision.

Hieron was once again lost, aimlessly wandering in the dark labyrinth of meaning after his first loss in five years. There was nothing left for Hieron to do other than talk about summer blockbuster movies with Ray Sefo. On August 7th 2012, Josh Koscheck was forced to pull out of his UFC 151 bout against Jake Ellenberger due to a bulging disc in his back. UFC brass placed their noggins together and invited Jay Hieron to re-sign with the promotion and take a fight against Ellenberger on just a couple weeks notice. The Thoroughbred accepted — and then this happened.

Once again, the universe laughed at Jay Hieron.

Jay Hieron is expected to face Jake Ellenberger on October 5th at UFC on FX at the Target Center in Minneapolis, Minnesota. Take note of the italicized word in that previous sentence. This is Jay Hieron, folks. If an alien invasion hits earth minutes before Hieron’s bout, I wouldn’t even be surprised.

Good luck Hieron — if that even exists for you.

This is why you should never let your champion fight anywhere else: Eduardo Dantas vs. Tyson Nam
Read Next Post →
Click here to cancel reply.