Affliction seems to finally unbeef the beef between Dana White 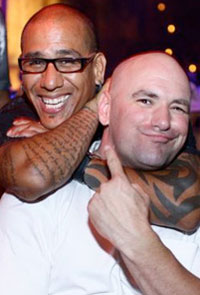 What a friggin Greek tragedy…for all of us. Affliction was a long time sponsor of the UFC. Everyone rocked their threads (even Dana White) and the universe was perfectly in order. Tom Atencio (CEO of Affliction) decided that he wanted to check off the ‘promotion box’ on the resume of his already wildly successful clothing line. Dana White gave Affliction the ultimate ultimatum: if they created their own promotion, Affliction Clothing will be banned from the UFC. A few weeks later Affliction: Banned was announced (accompanied with a ‘thank you’ email sent to Dana White for naming Affliction’s first MMA event).

The card went down in MMA history and so did their second event, Day of Reckoning, that many considered the most stacked card of 2009. Dana White claimed that Affliction’s business model was severely flawed and even predicted they would be bankrupt by the end of the year. Of course we all know that when someone attacks the structure of your business, the only way to retaliate is to challenge that person to a three-round MMA bout. Despite being over 40, Atencio had a 2-0 record in MMA and constantly called out Dana White to back up his words with 4oz gloves.

“I’m doing something Dana White won’t do, and that’s fight. He talks like a fighter, so why doesn’t he fight? I’m stepping up to the plate. And win, lose or draw. I attempted it.

“I don’t ever think [White] would fight.”

It never happened. Instead, Dana White just waited for the organization to stumble across some monumental obstacle and on July 2009, it did. The CSAC caught Josh Barnett with anabolic steroids from a drug test he completed in June of 2009. Even though he appealed the CSAC decision, dude was tentatively out of the fight. Tom Atencio began the frantic process of finding a replacement to take on the best fighter in the entire world with only two weeks notice. Everyone threw up their ‘Possible Barnett Replacement‘ lists and Brett Rogers seemed to be the collective front runner…even Fedor’s camp wanted a piece of The Grim. It was reported that Rogers would take the fight but wanted a cool $800,000. Rumors were flying everywhere, smacked a few people in the face, caused a couple concussions and then out of nowhere; BJPenn.com confirms Vitor Belfort will be fighting Fedor in Affliction: Trilogy. Yes, a middleweight stepping up two weight classes to fight the best heavyweight in the galaxy. Something wasn’t right. After a couple of frantic conference calls with Tom Atencio, Affliction Entertainment collapsed Friday, July 24th at 1:27 ET and instantly made a deal to become an official clothing sponsor at UFC once again. It’s like some dysfunctional loop that left a lot of fighters with bills to pay.

Last night at UFC 115, not only did we see Affliction displayed prominently inside the octagon, but the entire event was ‘Brought to you by Affliction‘. 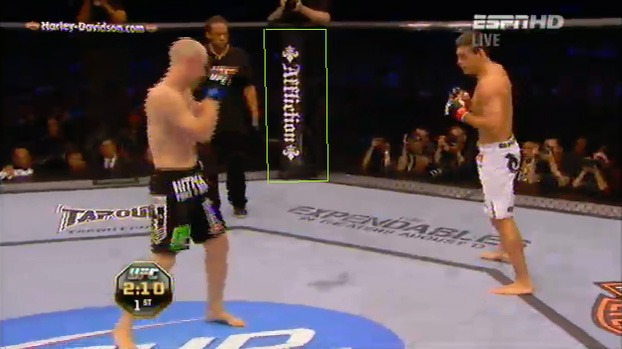 Damn, what a difference a year makes. For all of you MMA necrophiliacs out there, earlier this year I compiled Affliction’s last shred of life in the form of a press conference held literally hours before the entire organization collapsed. It’s haunting, strange and above all else shows that Dana White really did see all of this coming.

Chuck Liddell went from being KOd to the emergency room to partying with Jake Shields all in the same night
Read Next Post →
Click here to cancel reply.