Affliction is over; will only be a clothing sponsor for UFC 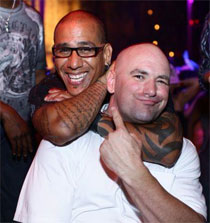 Another one bites the friggin dust and this happened in the course of just a few hours. We just witnessed the complete collapse of an organization that was backed by two billionares, the best promotion in boxing and the #1 ranked fighter in the world. It’s like someone just threw all those ingredients in a blender, cranked it to full speed, made a ‘Success Shake’ and then just threw it on the ground. Affliction has disbanded as a fighting organization and signed a contract to just be a clothing sponsor for UFC.

It’s senseless to point the finger. You could say it’s Barnett’s fault for using steroids. The California Atheletic Commision’s fault for the insane late notification. Tom Atencio for not having a plan B. The dude who made anabolic steroids. The government’s fault for banning the substance. It doesnt even really matter. It’s over (just like my chances of refunding three round trip tickets to Orange County. Hello Ramen noodles for the next two weeks).

What really matters in all of this are the dudes that we were going to shell out $59.95 to watch on PPV. What happens to them? It’s like you’re brushing teeth one morning to get ready for work and you find out that your job was converted to a doggy daycare.

First there was PrideFC, then IFL, EliteXC came next and now…Affliction. Rest in peace. Whatever man, I’m going to spend the rest of my friday night watching that marathon of UFC Unleashed on SpikeTV. Maybe Dana White was right all along. [Source]