McGregor was reflecting on his performance against Eddie Alvarez at UFC 205 four years ago as he claimed he had the most knockdowns in a title fight.

UFC middleweight champion Israel Adesanya disputed Conor McGregor’s claim of having the most knockdowns in a title fight.

Thursday marked the four-year anniversary of UFC 205 where McGregor made history by becoming the first simultaneous two-weight champion in the promotion following his second-round TKO win over Eddie Alvarez.

The Irishman took to social media to reflect on the bout and notably claimed he had the most knockdowns in a UFC title fight that night.

“Most Knockdowns in a UFC World Title Fight! Clinical shooting. I have surpassed this level, multiple times over. Excited to showcase!”

Adesanya Has The Most In A Title Fight

Not according to Adesanya or the official UFC records, however.

“The Last Stylebender” commented on the post with a small correction for McGregor. 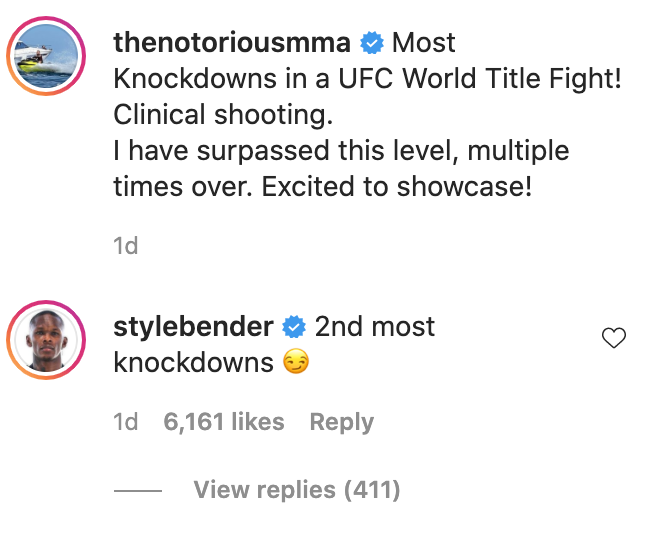 Adesanya, of course, is referring to his interim middleweight title fight with Kelvin Gastelum in the co-main event of UFC 236 in April last year.

The New Zealander officially knocked down Gastelum four times which is tied for third-most. However, it was the most in a title fight.

Israel Adesanya's (@Stylebender) 4⃣ knockdowns tonight are tied for 3rd most by a fighter in a single @UFC fight, behind Forrest Petz and Jeremy Stephens each connecting with five in a fight. #UFC236 pic.twitter.com/lwiv14WFOq

McGregor, meanwhile, believes he should have the most with five knockdowns.

However, the UFC has only officially recognized three knockdowns from his fight with Alvarez — something that has already irked the former two-weight champion in the past.

“Wait, what? The @ufc did what? That’s twice now! I want plaques before I’m back. Digital plaques shall do. Hurry up @ufc, I’ll be here. And use a good image.”

Wait, what?
The @ufc did what?
That’s twice now!
I want plaques before I’m back.
Digital plaques shall do.
Hurry up @ufc, I’ll be here.
And use a good image. https://t.co/Hq1j8GWcg8

If McGregor wants to earn top spot, he can certainly do so with an active 2021 — starting with his planned lightweight bout with Dustin Poirier set for UFC 257 on January 23.

However, that will not be a title fight as far as UFC president Dana White is concerned.

Paul Felder Tells Conor Mcgregor To 'Shut The F*ck Up' For Questioning His Irish Heritage
Read Next Post →
Click here to cancel reply.