According to this algorithm, Joseph Benavidez is the most dominant fighter in all of MMA

My stance on ‘official rankings’ is that it’s arbitrary, elitist and has absolutely no place in MMA. However, when you throw in complex algorithms created from overclocked computers and other mathematical intricacies that I would have a better understanding of if I didn’t treat my high-school Algebra class like I did my ex-girlfriend. FightMatrix is the only site that doesn’t have subjective rankings, but each fighter is ranked on ‘quality points’ derived from the amount it takes to finish a fight, strikes thrown (and missed) and the quality of the opponent they faced.

Last week they published their ‘Division Dominance’ rankings which, according to the site, can be understood as followed:

While a pound-for-pound list factors in divisional tenure and the ability to transcend weight divisions while remaining successful, this list does not. This list ranks fighters based on their point level superiority over those in the division in which they are currently ranked.

This is done by averaging the point level which encompasses the typical transition between the elites and top contenders of the division, then compares this average to the fighter’s current point level. The higher a fighter’s division dominance points, the more “dominant” they are over their divisional peers.

Granted, there’s only ten fighters in UFC’s flyweight division, but the real question that remains is where the [expletive] is Chael Sonnen on this list? 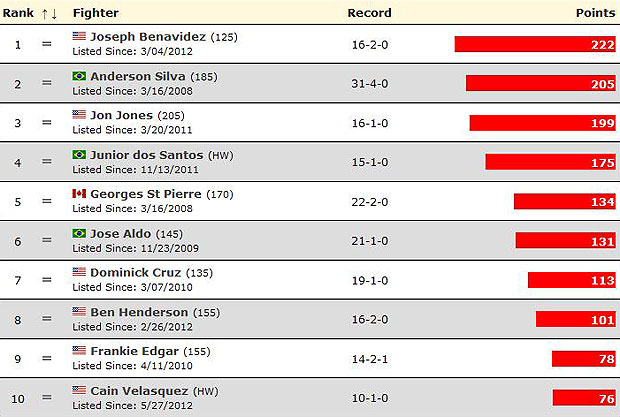 An omoplata within an omoplata, son
← Read Last Post