Ranking. How do they work? No one really knows. Demian Maia went on a splendid little rant at the UFC 194 post-fight presser about the “official” rankings, and now here we are, with supposed evidence of some ridiculous shit staring us right in the face.

Everyone knows Combate.com is a good site. They break a lot of cool info on everyone’s favorite Brazilian fighters. But maybe they’re too tight with these fighters, and maybe, just maybe, there are conflicts of interest in the rankings system. Could it be? COULD IT BE?

Look at Marcelo Russio – he dropped Conor McGregor 4 spots in the obtuse and already hypothetical P4P rankings, while only dropping Jose Aldo one spot. These are the people making the rankings, which have been a travesty for years in the UFC.

Look at what Redditor gare_au_gorille found: 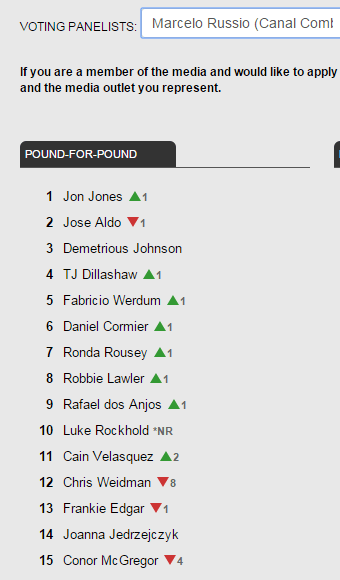