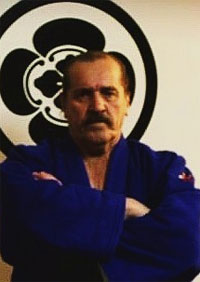 Pretty sure on any given day in Reno, Nevada some seventy-year old man is arguing with an attendant as to whether the Wheel of Fortune slot machine is ripping him off. When you get that old, life grants you a pass to slap anyone in the face without any repercussions. No one wants to reprimand an old guy and more importantly, no one wants to feel the wrath of old guy strength. You’ve felt it before, some old dude shakes your hand and nearly ruptures every vessel in your palm. It’s nature’s way of saying thanks for lasting this long.

Canadian based Saigo MMA Productions has organized an epic fight between two old guys and it all takes place in a casino in New Brunswick on July 24th. If you think I’m hyping this guy up, check out the official press release:

John Williams, Probably the fittest 70 year old man on the planet has accepted a challenge from Former Pro Wrestler and Kickboxing Champion Larry Brubaker (260 Lbs) on July 24th at Casino New Brunswick. There is no love lost between these two and there is no lost of words toward each other , a brutal shoving match took place at Elite 1 MMA’s Last event that solidified the war these two will have when they meet. The combined age of these two warriors is 119 years old; Gunshi Williams is a grandmaster of Saigo Ha Jiu Jitsu and have been Training for over 55 years, he is a role model to his students, Fellow Martial Artist, and friends, he sets the standard when it comes to showing how good living, serious training, and a healthy lifestyle can benefit you as you age, he has the physical capabilities of a man half his age.

Back in 1987, Gunshi John Williams set a Guinness World Record by breaking ten blocks of ice with a combined height of over nine feet high. Dude was 47 when he broke the record and it still stands to this day. Old guy strength is real quantifiable force that can only be measured through blocks of ice and Wheel of Fortune slot machines. [Source] 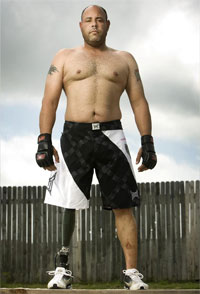 Man gets fined for using a prosthetic leg to keep his balance in an MMA bout
Read Next Post →
Click here to cancel reply.