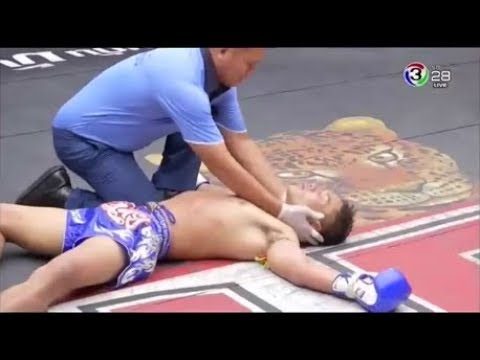 While many people believe teep kick is good to only rock the opponent or defuse the attack, we have a chance to see that you can land a teep kick which sends your rival straight to heaven. The way that fighter fell is equal to receiving a hard slam from concrete wrecking ball.

Not only that he went down, but the whole hall could have heard that deafening sound when he hit the mat! That is why you never ran without keeping your hands in the guard – you must protect your chin at all costs!

Chalawan Por Onnut defeated Rambong Leesorkanka in the fourth round of their 119-pound Rajadamnern showdown on Thursday after he landed a brutal and ultraprecise teep kick to intercept his incoming strike. You learned a lesson – even a disrupting technique can be fatal, especially when performed as a counterattack!

It has already been called a “Knockout of the Year” contender on Twitter. But don’t forget that Muay Thai offers a whole new arsenal of extremely attractive strikes like slashing elbow, axe kick, spinning back elbow, or even a spinning back kick to the body. It is far more interesting than a teep kick to heaven but who knows! Maybe Chalawan Por Onnut will earn the Knockout Of The Year award!

When it comes to UFC, you shouldn’t forget the way Anderson Silva knocked Vitor Belfort out – it was also a disrupting technique – left front kick to the chin. What do you think, is this teep kick a good candidate for Knockout Of The Year award?

Street MMA: The Most Legitimate Fight Ever to Happen Inside a Woman's Bathroom
← Read Last Post

The amazing true story of a gym owner who turned a massive Street MMA brawl into some legit MMA fights
Read Next Post →
Click here to cancel reply.