Ronda Rousey is slowly turning into a real WWE superstar. The former UFC fighter and the first female UFC Hall Of Fame member faced Nia Jax this Sunday at Money In The Bank WWE event.

Rowdy had a match against RAW women’s champion Nia Jax, and it was pretty interesting to watch. Ronda Rousey had her finished few times and performed some attractive stunts inside and outside of the ring.

A few seconds away from winning the belt and having her armbar secured, Alexa Bliss interfered into the fight, slamming the briefcase into Ronda’s back and stopping her from retaining the belt. In the end, Alexa Bliss decided the outcome of the fight. The victory was stolen but it is just a pro wrestling!

Her name is @RondaRousey, and she was BORN READY to compete as she takes it to the #RAW #WomensChampion @NiaJaxWWE! #MITB #RondavsNia pic.twitter.com/vBVpeLHAde

Despite everything, Rowdy was impressing the crowd all the time. Nia was mostly fighting her but a former UFC champ got used to receiving heavy hits, which can’t be said for throws. Many UFC superstars, including Holly Holm and Amanda Nunes, were staying off the ground game with Ronda Rousey like a plaque.

This was the first time Ronda Rousey wrestled a full match sans tag partner. She looked like she belonged to the main pay-per-view event executing few tremendous throws on a lot larger and heavier opponent. Despite Nia threw her to the floor heavily few times, one thing is certain – a Judo black belt fighter knows to fall, and no injuries occurred!

You're not in the octagon anymore, @RondaRousey… #MITB #RondavsNia pic.twitter.com/k57esdf9pJ

BLISS ON A MISSION! @AlexaBliss_WWE has attacked BOTH @NiaJaxWWE and @RondaRousey with the #MITB briefcase! #RondavsNia pic.twitter.com/weaACq2IAu

We can see that harai goshi rocked Nia Jax heavily!

But if you are a real fan of UFC, are you even aware how many times could Ronda Rousey finish her opponent off with an armbar? WWE has decided to cartoonify the submission, and the reason is currently unknown. However, these rolling moments and breathtaking throws show you why Rowdy was winning so successfully for a very long period of time! 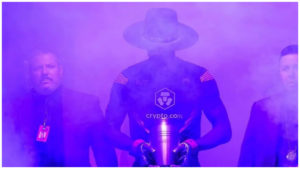