The Do’s and Don’ts of Pad Holding: How to be the Partner Everyone Wants to Train With

How to be a Good Padholder

Pad Holding is an art in itself. It’s a skill that requires confidence, speed, spatial awareness and strong communication skills. It’s an essential component in the repertoire of a Martial Artist and many sports incorporate pads as an indispensable part of the curriculum.

The type of pad will vary from sport to sport. Thaiboxing uses Thai pads: rectangle shaped pads that are a little longer than the forearm and thick enough to absorb powerful kicks to the body. They are also used to catch punches.

Boxing has much smaller pads, often called mitts or focus mitts. They vary in shape and hardness but are often round and small to encourage and improve accuracy. There are other tools like paddles and foam noodles that are used to work with boxers, but in a class you’ll most likely be using a pair of mitts.

Taekwondo pads are relatively thin in comparison and are held by a long handle. This allows the padholder to meet the speed and precision of strikers by moving them quickly at a number of heights.
Regardless of the sport or it’s equipment, it’s important to learn how to use them appropriately.

There’s nothing worse than a bad padholder and nothing better than working with someone who has mastered the art. It can make all the difference in your training and performance. How you padhold not only affects you, it also affects your training partner, the striker. Most Martial Artists will be forgiving to the newbs, but after a certain point, it’s time to level up. Nobody wants to work with a lazy padholder, while people will queue up to be your partner if you know how to really work the mitts. While it does take time and experience to become one of the best, the basics are easily achievable and will help you stand out as the partner everyone wants to train with.

Here are our do’s and don’ts of padholding:

Pad Holding: hide
DO:
Give Feedback
Adjust to Your Partner
Simulate a Fight
Encourage Them
Take Control
DON’T:
Stand in One Spot
Don’t Smash the Pads into Your Striker
Switch Off
Call Out Strikes at Random
Be Afraid of Criticism
Final Words

Feedback is one of the most crucial parts of being a good padholder. Confidence or lack of experience is often an issue here, but, it’s critical to the improvement of your striker. Listen carefully to what your coach has outlined for the pad round and try to make sure your partner is achieving it to the best of their ability. If you feel like you’re unsure, call your coach over to double check.

Feedback should be both positive and negative. If something connected really well, let them know. Equally, if it’s misplaced, needs more power etc, tell them. You do not help your partner by omitting negative feedback. In fact, it can be detrimental to their craft. They can’t see what they’re doing, you can, and flagging up mistakes prevents bad habits from developing. 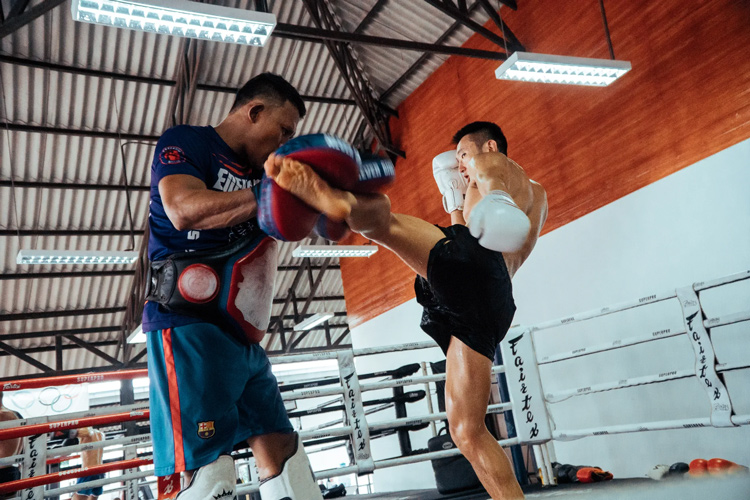 Adjust to Your Partner

When you are holding, the rounds are not about you, it’s about your striker. Firstly, make sure you are in their stance. They will be orthodox the majority of the time, but if they are Southpaw (lefthanded), it’s your task to change for them, not the other way around. It may feel awkward to begin with, but it’s a skill that will also benefit you as much as it does them.

Secondly, make sure to hold the pads at an appropriate height and width. It’s surprisingly common that tall students will put the pads too high for shorter students. Another common mistake is that they are held at chest height. The pads need to be at head height for your partner, their rib height for kicks, etc. Again, if in doubt, check with them for their preferences and needs.

Check out: The Best Muay Thai Pads For Use In MMA

Padwork is not just about fitness, it’s the framework for a fight. An excellent padholder is asking for strikes, and also checking defences and counter abilities. Make sure their guard is up. Catch their kicks.This should be happening regardless of level. Even if working with a beginner, you can throw your arms and legs wide and slow, giving them adequate notice to defend the strikes; it’s critical for their development. Ask for both defensive and offensive striking and try to vary combo lengths. Use different ranges. Change the tempo throughout the round. Ultimately, whatever could happen in a fight should be somewhat replicated by you as a padholder to keep your striker on their toes.

Use positive energy to get the best out of your striker. Encourage them when they are doing well and especially when they are not. Push them forward in a way that demands more from them. Reinforce good habits, responses, and effort by vocally acknowledging it as soon as it happens. Sometimes all you’ll need to do is match their energy, and others you’ll need to give more than them. This is part of training on a team, and they will do it for you when it’s your turn. It can make a big difference to the striker to have a padholder that’s cheering them through the struggle. 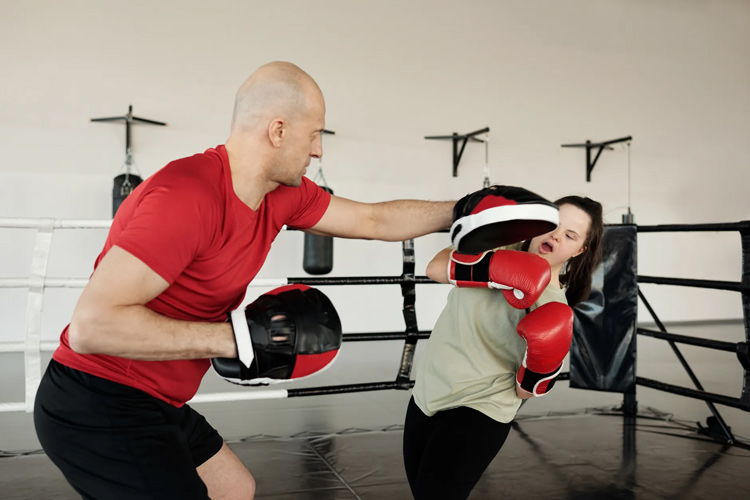 As a padholder, you are in charge. It is up to you to give your teammate a good session. Make sure you are clearly communicating to them what you want, whether that’s a combo, a counter or a sequence. Maintain good eye contact to make sure they are listening and understanding your commands. Don’t let them slack off, always ask for just a little more than what they are giving. Additionally, don’t let them run the round. Be confident in your requests and you clear the largest hurdle of padholding.

Stand in One Spot

No opponent will ever stay in the same place. So a padholder shouldn’t either. As covered earlier, pads are a fight simulation, so be sure to keep it moving. Make the best use of whatever space you have by changing directions regularly. Move backwards and forwards to test their range and reaction. Move sideways so they learn how to cut off the ring. Sometimes, move quickly like an aggressive opponent, then switch it up by stepping back and seeing how they react to a counter fighter.

Again, this leads back to making it realistic and keeping your striker engaged and most importantly, thinking strategically.

Don’t Smash the Pads into Your Striker

Meeting your striker with the pads too early inhibits their ability to reach full extension which is necessary for them to gauge and understand their range. Some padholders are guilty of smashing the pad or mitt into their partner and some even do more work than their striker! Hold the pads at realistic distances. Punches should be caught just in front of and to the side of the face. Kicks and knees should be caught as close to the ribs as possible.

It’s always necessary to have your weight behind the pad. This protects the striker from over extension and the padholder from getting hit in the face with the pads. This, however, can be misconstrued and overapplied when you end up shortening the length and possibly doing damage to your partner.

If there is a large weight discrepancy between pad holder and striker (smaller padholder), then you will need to add more weight behind the pads to reduce the feeling of power as you catch the punch or kick, but it is even more important to keep the pads close to the body in this instance. Receiving heavy blows from far away can cause unnecessary and possible long term damage to shoulders, elbows and wrists. 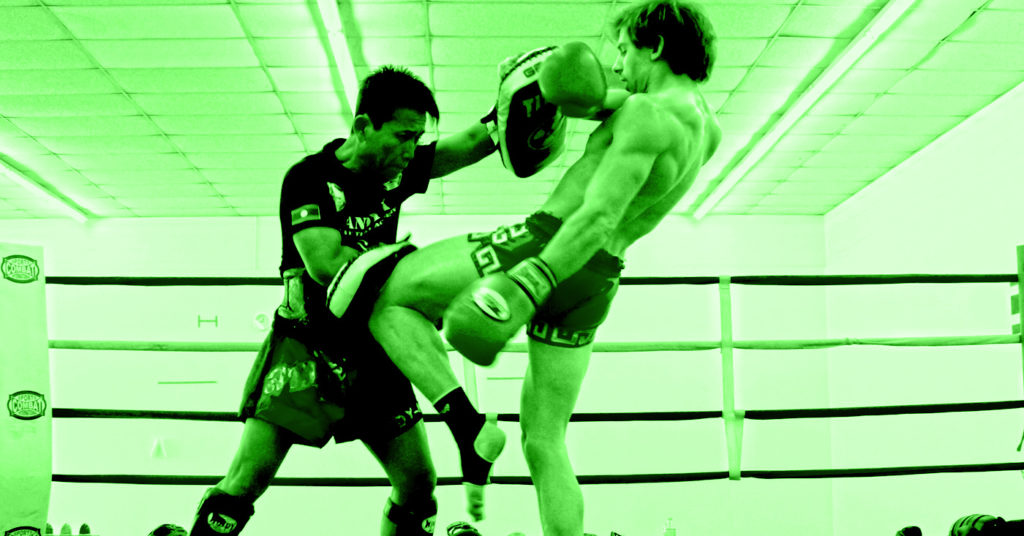 Too often pad holders use the round to recover, and merely go through the motions. They allow sloppy technique, poor defence and subpar effort. Padholding at its best is fully engaging for all involved. It not only hones the fighter’s skills, but also those of the person holding. Reaction is such a large part of martial arts training and these are trained while timing strikes and catching strikes. It’s a great method of developing your hand-eye coordination.

It is also unfair to give anything less than your best when in this position. When it’s your turn to strike, you should be able to look forward to it. Strikers should not have to just hit random targets on spot with little to no thought put behind it. That’s what boxfit is for. It has no place in a Martial Arts institution.

Call Out Strikes at Random

Put some thought behind your directions. Don’t just call out whatever strike pops into your head. This is not very realistic for a fighter and can interrupt their flow. Everything you ask for should have a purpose. Instead, put together combos.

Throw a strike and know what defense and counter you want in return. Ask for multiples of strikes, the training should be hard so that you are completely prepared for competition.
If you are a beginner, but want to take it seriously, watch a fight or tutorial for some combo inspiration if allowed. This is a great way to learn new techniques and your partner will love the challenge. 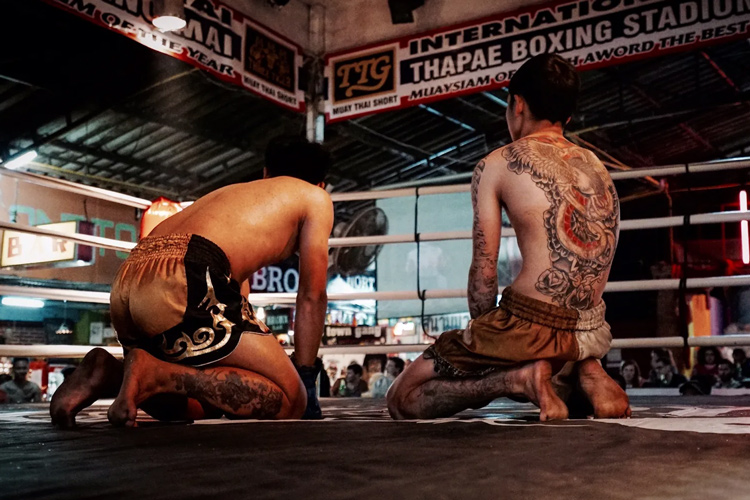 Be Afraid of Criticism

We all benefit when people offer constructive criticism. When padholding, it’s important to feel comfortable giving and receiving critique. We don’t help each other to grow if we allow flaws to stay under the surface. Our comfort is not more important than our growth. If your striker asks you to adjust your pads, as long as it is safe to do so, then do it. You can only gain from learning various ways of padholding. Equally, as much as some of us hate criticizing others, it really is necessary to make sure your striker understands how and what went wrong so that they can fix it. It’s a two-way street.
Being able to give and take criticism is a skill that will take you far in Martial Arts.

Being a good padholder can take years but the fundamentals are easy and simple to grasp. Clear communication is a must; speak loudly and confidently so that your striker knows exactly what you want. Over time you will figure out shorter cues or explanations to get the actions you desire. Engagement is also a key factor in becoming a good padholder. Your striker should be forced to think about your next moves, just as they would in a real fight.

And even though you are not the head coach, still provide feedback, constantly refining their work. Eventually you will develop a keen eye for correction and will be able to improve someone’s striking in a few simple adjustments.

Think about your best or favorite pad sessions and what made them so enjoyable. Usually it’s a combination of good direction, confident strike catching, effective feedback and getting pushed to your limits. Once you’re able to achieve that, make it as dynamic and realistic as possible. Don’t forget to send your encouragement along the way. Padwork, especially in a fight camp, can be used to break us down. Ensure that you are also building people back up.

Finally, be patient. Practice patience with yourself as you learn and extend that same compassion to those who are new to learning Martial Arts. Inevitably, you will work with a variety of strikers and they won’t always be up to your speed. Padholding is a skill that is defined not only by its physical capacities, but its virtues too.

Ali Abdelaziz Says His Fighters Will No Longer Speak With ESPN Or TSN
Read Next Post →
Click here to cancel reply.