(Video) Fans Go On Full-On Rampage At GLORY 80, Leads To Event Being Canceled

Things took a turn for the worse at GLORY 80.

‘Wild’ would be an understatement for what went down at GLORY 80 this weekend.

The kickboxing event was held in Hasselt, Belgium on Saturday night. Fans would get into a frenzy following the co-main event result. Dutch kickboxing icon, Badr Hari would be dropped by a flying knee in round 2 of his fight against Arkadiusz Wrzosek. The fans would go crazy. A bit too crazy.

The arena would have an uproar after the knockdown. The atmosphere within Trixxo Arena quickly became hostile. The fans in attendance would throw a big tantrum… along with throwing chairs and drinks to the ring. They’d also jump over barriers and seats, starting brawls with opposing fans.

The start of the riot, captured by GLORY Heavyweight Antonio Plazibat. pic.twitter.com/JdhTXWlm27

Things have taken a turn for the worse. Brawls are breaking out, chairs are being thrown, fans are storming out of the arena. #GLORY80 pic.twitter.com/jZenGHNfD3

Another crazy thing is… Badr Hari vs. Arkadiusz Wrzosek hadn’t even ended yet. The bout wasn’t ruled a KO for Wrzosek, because Hair got up to his feet. Despite the fact, the chaos continued outside of the ring.

The co-main event would end up being called off due to security reasons. The headliner would also be cancelled due to the hostile environment within the arena.

Here’s a look at the aftermath, courtesy of the ‘fans’ at GLORY 80.

Badr Hari would reflect on the event and the actions of his opponent’s fans on Sunday.

“I want to express my thanks to GLORY for their good organization in the run up and during GLORY 80. Me and the Badr army, which has been amazing yesterday and since the beginning of my career, were looking forward to an amazing night of top sport and a great fight. I would have loved to offer you a great third round. Yesterday I felt strong, well prepared and ready to win this fight.

“Unfortunately, the fight has been cancelled because of a small group of hooligans who ruined the evening. This behavior has nothing to do with the values of the sport or with GLORY. I have never experienced anything like this and we should stand up against this. I regret that my opponent didn’t realize how dangerous was the attitude of his fans.

“I have all faith in GLORY that they will continue to offer kickboxing fans the greatest events in combat sport worldwide.Work continues… we will be back soon. To my Badr Army, I love you.”

The promotion, of course, would put up a PSA following the chaos as well.

“GLORY deeply regrets that GLORY 80 was interrupted by people exhibiting unsafe behavior,” the official statement read. “We never condone or accept behavior that endangers other fans that come to our events to enjoy a night of top sport. Upon the request of the police in the city of Hasselt, we stopped the event after the 2nd round of Hari – Wrzosek.”

“We apologize to the fans who did not get to see the end of this bout and the Ben Saddik [vs] Rigters matchup [and] also to the athletes who trained so hard and did not to compete. Martial arts is a sport of respect and fair competition inside and outside of the ring.” 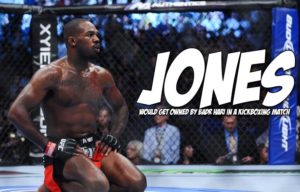 Unexpected photo of the day: Jon Jones hanging out with Badr Hari in Russia