One of the greatest fighters out in the MMA world is no other than former UFC flyweight Champion, Demetrious “Mighty Mouse” Johnson (29-3-1). Having a rise in the UFC with eleven world title defenses under his belt before shifting over to ONE Championship, he is no stranger to the casual eye. Not only does he set new heights against opponents in the cage, he also does it sitting in a computer chair in front of his gaming computer.

Before heading to Japan, us at MiddleEasy we were able to have a little chat before Tokyo welcomed DJ as he moves in the ONE: Century Flyweight Grad Prix Finale against Danny “The King” Kingad (14-1). The winner will get a chance to fight the current flyweight Champion, Adriano “Mikinho” Moraes (18-3) where the belt will be on the line.

The fight camp was Johnson’s longest one to date. It started in January of this year all the way through October before making his way to Asia to prep for the Flyweight Grand Prix. During that time he also stayed active fighting against Wakamatsu and Wada in March, August and now made his way into October.

“I’ll be competing via morning and the second fight via nighttime which is great because they will air live on tv, “ said Johnson when asked about the double feature event ONE Championship is putting on in one night.

The cat is out of the bag when ONE Championship announced they will be entering the US Market. While the domination has been created in Asia, it will continue on new soil. DJ confirms, “There is no better time then now. I think the year 2020 and they are looking around the East Coast area. You know possibly New York; somewhere around that area.”

Knowing “Mighty Mouse” is from Seattle, Washington it is pretty exciting to know there is a possibility of taking new career ventures back to his hometown sometime in the future. Not only does DJ have the perfect opportunity to take his belt and compete in the US, but he’s also the Chief Brand Ambassador for ONE Esports.

ONE Championship always aims to be different in the way they approach their community of fighters and their audience.

“Gaming has been a passion of mine since I was a child,” Johnson explains.

Working with large brands like Twitch, Ubisoft and EA opened the doors to bring his vision of ONE Esports to life within ONE Championship. The first event held was during the ONE Martial Arts Fan Fest this past weekend on October 5-6th at the Bellasalle Shibuya Garden in Tokyo. Tournaments that were being held was the ONE Tekken Tokyo Invitational and the ONE Street Fighter Tokyo Challenge. Masato “Bonchan” Takahashi was in attendance as well where he won the 2019 EVO Championship Street Fighter V: Arcade.

When mixing video games and fighters together to some it seems like a mesh that makes sense, DJ included. “It’s a great benefit. If you look at the audience today of millennials maybe three years ago when the Olympics were going on, they had the finals I believe were going on. The viewers were a lot more on that than the Olympics I think.” He continued, “When I saw that I wanted to be apart of that space and to be around passionate people.”

Seeing Johnson as being the perfect Chief Brand Ambassador for ONE Esports, diving into a world of technology isn’t just exciting but sometimes necessary. The possibility of gaming moving into more of an innovative tech centric space, there is nothing out of reach. The possibility to put on a virtual realty headset and use your hands inside of content to immerse with the world around you seem far fetched but its not. Why play the game when you can be in the game; but there is a downside for now. “It would be very hard. I want to game and relax where I want to plug in three hours at a time,” DJ explains.

So knowing that a virtual reality headset might not be the answer at this time it all comes down to content. Instead of playing an active boxing game for a hour against a virtual opponent, the idea of watching fights from any point of view is a given which ONE Championship already does. They are always trying to push the promotion to new heights and that is a huge reason why “Mighty Mouse” is magnetized towards them.

Streaming on Twitch seems like its own battle in a way aside from fighting. Normally streaming games like Gears of War 5 and WoW while being interactive and engaging with his audience, a typical day in the life goes like this: having three little kids running around normally you don’t get to stream that often, but when you make the time you are locked in for that scheduled time. “I want to get back into games that actually have a dialogue. Plug in about 30-40 hours.” DJ said. Meanwhile other games like PUBG, Final Fantasy VII remake and the anticipation of Call of Duty: Modern Warware to come out it seems like DJ has his hands full.

The future of MightyGaming is always an interesting topic knowing what video games mean to Johnson. “I try to keep it away from martial arts but its kind of hard to.”..”We have our first sample of rash guards coming real soon (March),” DJ continues. “I stepped away from youtube because I don’t like the monetization.”

Knowing that streaming is the future in a lot of cases the idea of Demetrious Johnson following another dream in which he’s passionate about only speaks wonders about his character but doing what you want.

“I’ll be streaming full-time in 5-6 years,” Johnson says as he puts on stamp on it.”

ONE Championship seems to be doing all the right things in moving forward and finally it seems that Johnson has met his match for expansion. Also to finally bridge the gap between an ONE Esports event and Twitch stream at a time.

Make sure to not miss Johnson’s fight in the ONE: Century Flyweight Grand Prix Final for their 100th event starting against Danny “The King” Kingad October 12th on tv in the states through TNT Drama while the fight happens in Tokyo, Japan.

Watch the full video of the interview here 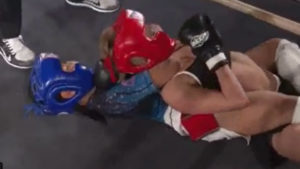