As a diehard New York Rangers fan, my initial review reads as follows “Devils suck; 1/10.” One might argue that the only redeeming value of the New Jersey Devils is their biggest fan, the legendary David Puddy. I had to put my biases aside though and look at this game for what it is.

In last year’s installment of the NHL series, EA added True Performance Skating, which added life-like skating and entirely changed the game. This year they added upon that, adding over 1,000 new skating animations and making everything feel even more like the real thing. Before NHL 13, the skaters didn’t carry weight, it didn’t feel as if you were controller an actual person, as much as you were controlling a ghost that didn’t have any weight or momentum. In last years and especially in this years the players carry weight, starting from a dead stop you can truly feel the players that have highly rated acceleration with the amount of speed they pick up within their first few strides. With players carrying weight, it forces you to be more creative with the puck to get into the zone, skate past defenders and ultimately put the puck in the back of the net. No longer can you just skate back and forth without losing speed until you find an opening, you’ll have to use everything that is in your arsenal to succeed. When you do successfully put everything together, dekeing out defenders, using 45 degree cuts to slide past them and get it past the goalie, it’s an incredibly rewarding feeling.

The biggest features added into the gameplay of NHL 14 outside of improvements to the True Performance Skating are the NHL Collision Physics and the Enforcer Engine. The NHL Collision Physics are vastly improved from past years, this year hits feel more realistic and satisfying. For example, in past years you’d be skating full speed into another player as he’s skating at full speed as well, you go for a check and the majority of the time you’d just bounce right off of him. Even if you did deliver a check that was devastating there’d be a decent chance the hit would look flat out silly. This year hits feel real, no longer when you hit someone along the boards will they spaz out, now they crunch and collapse in such a fashion that it makes in believable. While the improved collision physics are super fun and make the game feel much better, there tend to be a few too many devastating hits in a game. That’s mostly because you don’t exactly play NHL 14 as if it’s real life, you check more because it’s effective and easier to deliver checks than in real life. Thankfully, there are sliders to adjust this. This carries us into the new Enforcer Engine, which is exactly what it sounds like. Unlike in previous versions, if you crush an opposing computer team’s star player, an enforcer will come up and drop the gloves. A little addition such as this makes the experience as a whole feel much better, no longer can you target and cheap shot star players without consequences. With this, of course they revamped the entire fighting system, gone is the first person mode which relied on how fast you could flick the right stick up, and in is a new third person fighting engine which uses the Fight Night technology. It revolves around making your combatant miss and countering, it’s a minor upgrade in the grand scheme of things but it still adds to the overall experience.

Now onto something that has plagued the series for quite some time, that’s the AI. The AI has always been fairly bipolar, they end up being either easy to figure out and exploit or downright cheap. This has been modified to my delight, offensively the AI will cycle the puck a lot more when they are in the offensive zone, making smart passes and reads to their open teammates. Although If you stack the blue line with defensemen they still tend to pass the puck horizontally instead of dumping the puck in. Defensively they’ve made improvements as well, it’s much harder to just skate past the computer on the outside for an easy goal, they cut off lanes a lot better, they won’t stay stagnant, and they just make it much harder to score. This also leads to your AI teammates to help you out, when you have AI teammates they actually do what they are suppose to. Say goodbye to the days of all three forwards going up the ice in the same place with none of them on the boards. The upgrades to the AI makes the game so much more enjoyable and while not perfect it’s a step in the right direction.

One of the biggest marketing pushes for NHL 14 this year has been the NHL 94 mode, seeing as it’s the 20th anniversary, it makes sense it would be in the game. Needless to say that I love NHL 94 and spent countless hours playing it, so I was really excited to see this has made its way into the game. Sadly, it ends up being just a gimmicky affair. It’s just blue ice with the retro scoreboard and classic controls. Basically, it feels like you’re playing NHL 14 on rookie with classic controls, that’s it. I’m not exactly sure what the thought process was when developing this mode, but it’s a shame though, I think they missed the boat on this one. If it played more like NHL 94 and differentiated itself from the core gameplay of NHL 14, I think it would’ve been a hit. As it is, it forgets the people who would want to play it, those are the same people who grew up playing as the Chicago Blackhawks because Jeremy Roenick to NHL 94 is Bo Jackson to Techmo Bowl. Don’t get me wrong though, it does have its uses, it is something that is fun to play when you have friends over that don’t know how to play. Outside of that, it’s something you’ll play once and never touch again. 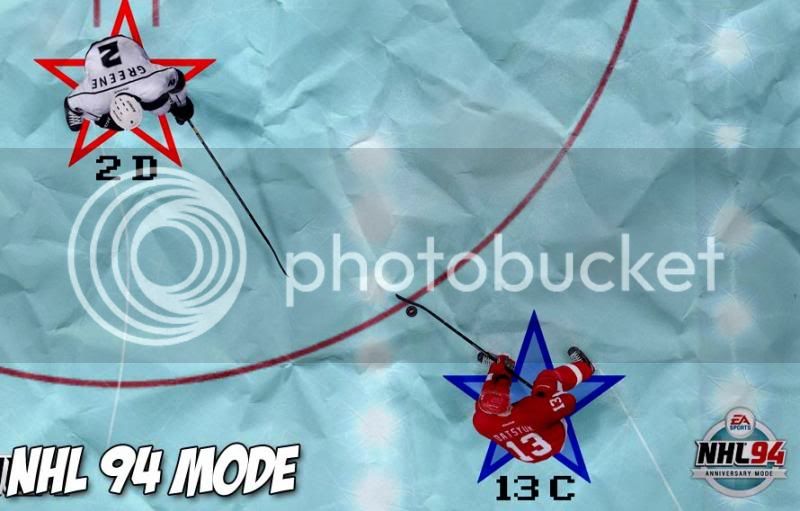 Live The Life is what was once known as the Be A Pro mode. They’ve made some slight changes to it this year. In past years you’d essentially just play each game and that was it, just slowly improving your player until he was an unstoppable murder machine that was put on this earth to do one thing, murder anyone on ice and put pucks in the net. This year they’ve added four “likability meters”, each having an unique effect on you. Whether it’s giving you a boost in your attributes, getting booed or cheered when you touch the puck, management having it out for you and keeping you down in the AHL. It’s a nice addition but in my few hours of playing it, I noticed I got the same questions over and over again and I found myself sitting there trying to figure out which one would just give me the biggest boost in my attributes. It does add to the mode and gives you something to do between games, but the mode still falls somewhat flat.

For me one of my favorite things to do in a team sport game is to go into the GM Mode and act as a GM, don’t play any of the games, just be a GM. I can tell you that GM Mode has seen many improvements. One of the most notable changes is that you can upgrade the trade difficulty, in past years I found that it was incredibly easy to end up trading for draft picks and young talented players. With this, it makes teams much more difficult to trade with, if you want to get a young stud or a top 5 draft pick, you’ll have to pony up big time. Teams can also gauge if they are a “champion, contender, hopeful, rebuilder.” to realistically determine what kind of players that they are after, as well as what players they want to give up. Another nice feature is that players improve and decline in season. These changes can be permanent or temporary. If you have a team filled with first liners and one of them is playing on the 3rd line not getting a lot of minutes, his attributes will decline. On the other hand, if you have a high potential young stud, who is playing well and getting a lot of minutes, he’ll improve in season. It adds a certain level of strategy when deciding who will play where and on what line. There are also little additions as well, such as if you have an empty spot in your lines that you missed, it’ll tell you exactly where it is and it’ll be highlighted red. It’s little improvements such as this that makes GM Mode such a joy.

With offline GM Mode being so much fun, it’s a sad to see that GM Connected mode, their online GM Mode is so lackluster. It’s still plagued by crippling load times, albeit not as bad as last year, but to the point where it makes it nearly unplayable. If it wasn’t for the long load and simulating times I have no doubt that this mode would be an absolute hit, but until that time comes, it’s not worth it.

The Hockey Ultimate much like GM Mode has received minor upgrades to make it a much more user friendly experience. HUT is a gamemode where you buy packs of players to have on your team. You can sell and trade them, try and get more money to buy better players so on and so forth. In previous years, HUT was a mode that always seemed like a great idea and should be fun but never really took off for many users. It seemed nearly impossible to acquire enough in game currency or coins to get enough contracts for your players while also acquiring new and better players, even if you continually won games in blowout fashion. Now you get a slightly bigger purse at the end of each game which makes the world of difference. You also earn extra coins in any game mode you play. Also making HUT a much better experience, you won’t end up having all of your high level players left without a contract in a matter of games. It’s much easier to continually build up a good team which wasn’t the case before.

Onto my favorite mode year in and year out in the NHL series and that is EASHL. EASHL mode is where you essentially have a be a pro player and you and your friends are on a team. This year they’ve added a more robust matchmaking system and ranking system as well. Outside of that, they didn’t add much to EASHL mode, but that doesn’t mean the mode isn’t absolutely phenomenal. Playing a 6 on 6 has been and still is one of my favorite things in gaming today. It’s such an incredible feeling to progress as a team through a game, making adjustments and then making adjustments based on the adjustments the other team has made. Phenomenal.

While NHL 14 isn’t a massive improvement over other years, it didn’t need to be. The ground base for a great game was already there, with a few minor flaws. This year built upon that already solid base to make a better game. NHL 14 is a game of small improvements and it shows, it’s cliche to say at this point, but it’s the best NHL game to date.

The American Dream, MMA and the Gentrification of Martial Arts
← Read Last Post
Breaking Bad Recap: Ozymandias; or, What Have I Become, My Sweetest Friend?
Read Next Post →
Click here to cancel reply.