Urijah Faber has a perfect combination of striking and grappling. He was known for very attractive throws and slams, extremely good clinch game, and outstanding ground and pound. In the stand-up, he is a master of clinching hooks and uppercuts, but he also has very good long range striking. Urijah Faber is also known for excellent reflexes and precise strikes.

As a BJJ brown belt, Faber has a lot of submission victories under his belt. His favorite submissions are rear-naked choke (7 victories) and guillotine choke (6 victories). His superior strength enables him a great standing guillotine choke. One thing is certain, you don’t want this guy to wrap his hands around your waist or head.

On the ground, Faber gives an advantage to the elbows over punches. He has lightning fast punches and one of the most effective transitions ever seen in the world of UFC.

Urijah Faber has two negative records – he was defeated four times in a UFC title fight, and he lost a total of 8 times in a title fight.

Urijah Faber had his UFC debut versus Jay Valencia at GC 20: Gladiator Challenge 20 on November 12, 2003, in Colusa, California, and he won via guillotine choke. This was the fastest victory of his career – it lasted only 1 minute and 22 seconds. He had many significant fights in the smaller promotions before he signed for the UFC.

The Californian Kid competed in Bantamweight and Featherweight division for 7 years, earning the score of 24-4. He joined the UFC as a very experienced competitor. Some of his notable victims were Dominick Cruz, Takeya Mizugaki, Raphael Assuncao, and Jens Pulver (2 times). He has also survived the quickest defeat of the career at WEC 36 finals on November 5, 2008, when Mike Brown finished him after 2:23 in the first round.

Urijah Faber had his UFC debut versus Eddie Wineland at UFC 128 on March 19, 2011, in Newark, New Jersey, in the co-main event of the evening. Mr. Faber won via unanimous decision after three rounds. 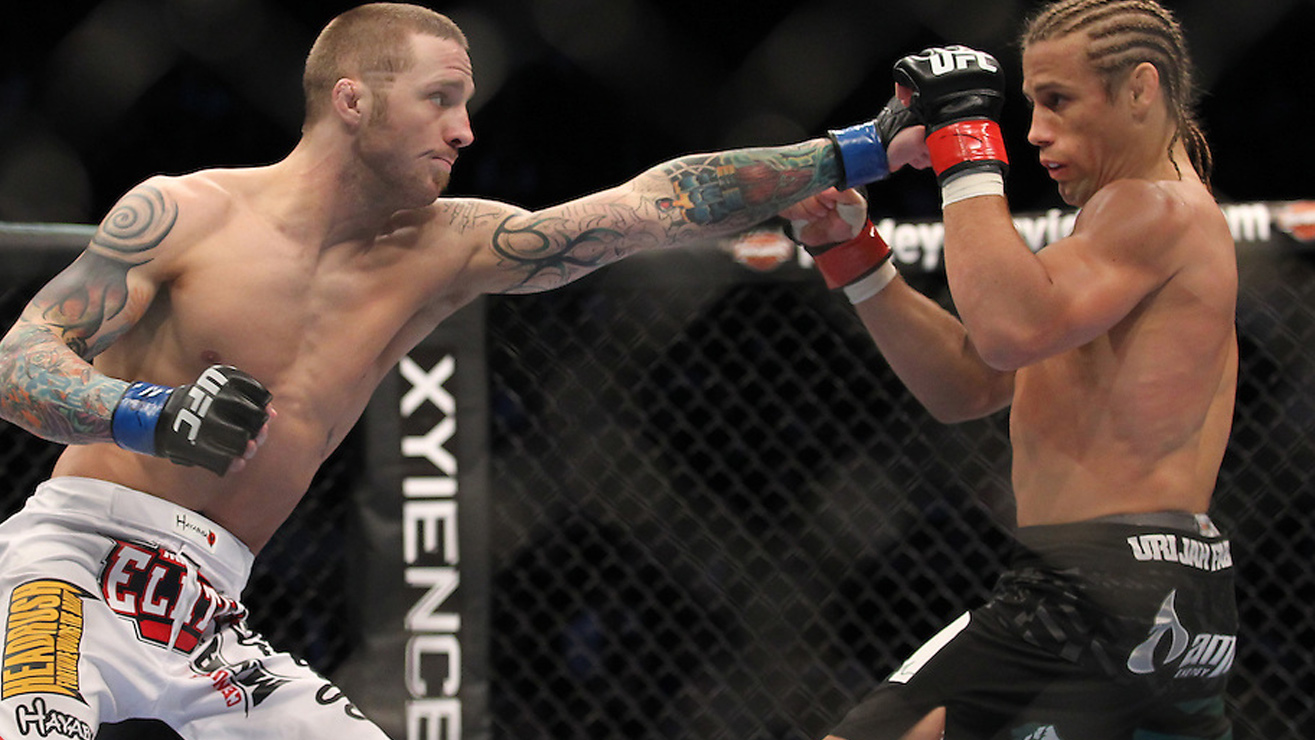 Urijah Faber faced Dominick Cruz on July 2, 2011, in Calgary, Alberta, in his first main event of the evening. The fight was very dynamic to watch, and both fighters demonstrated world-class skills during five exhausting rounds. Dominick Cruz won via unanimous decision, settling their mutual score to 1-1. Both fighters received Fight Of The Night bonus. 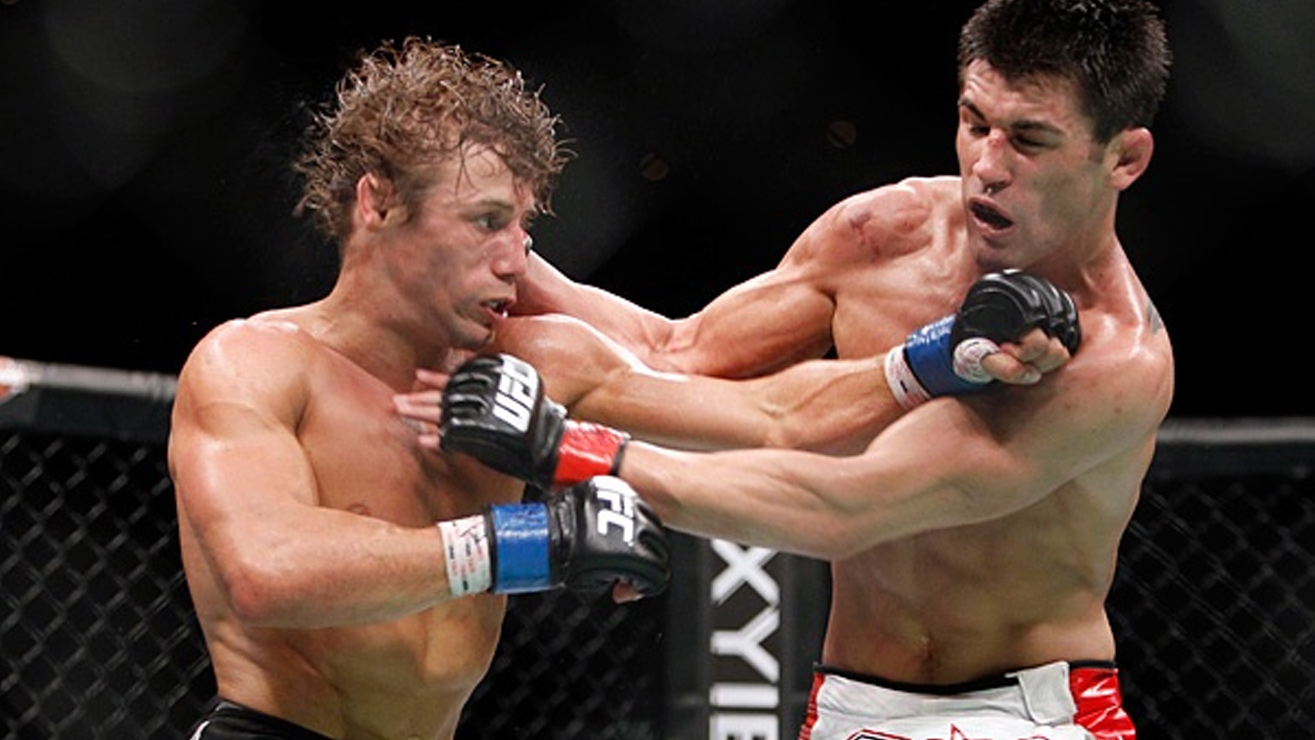 The Californian Kid defeated Brian Bowles at UFC 139 on November 19, 2011, via guillotine choke in the second round.

Faber’s next opponent was Renan Barao on July 21, 2012, in Calgary, Alberta. Unfortunately, despite The Californian Kid demonstrated tremendous fighting, he was defeated via unanimous decision. However, Urijah demonstrated how strong the power of will can be – he suffered a broken rib in the first round and fought until the end. 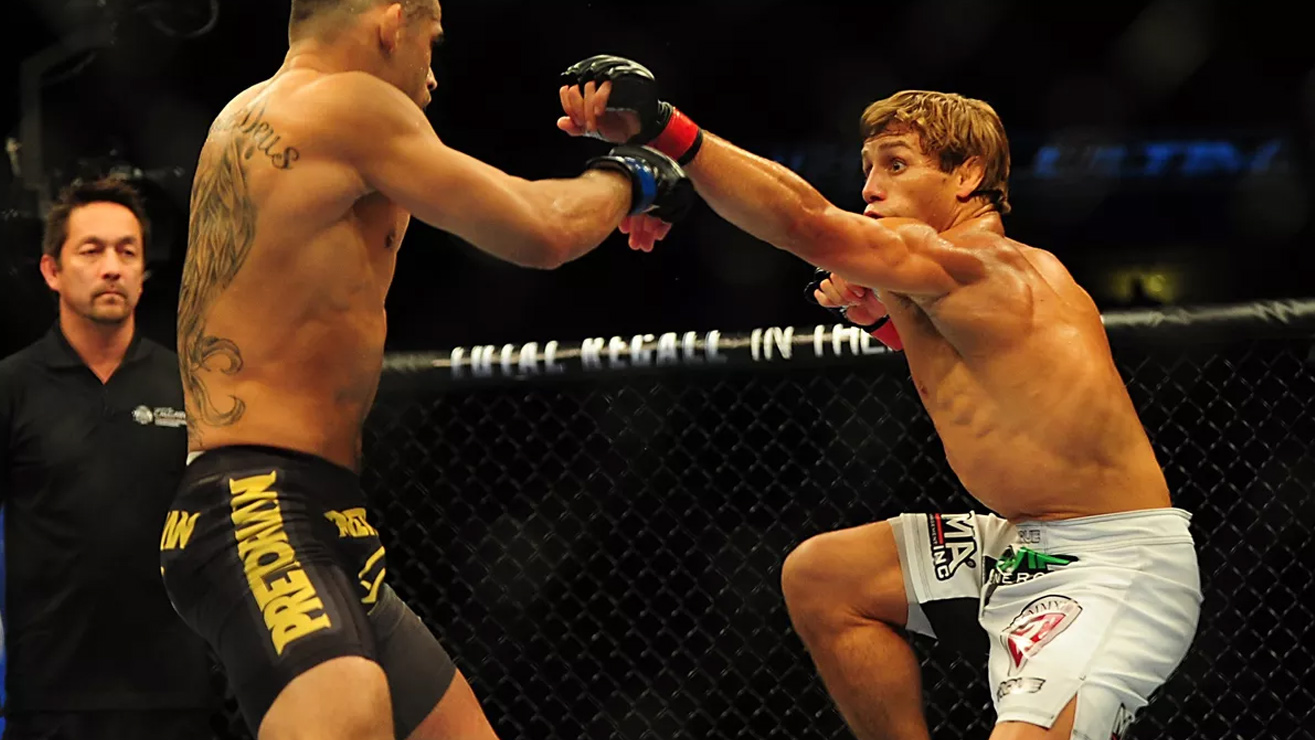 His next opponent was Ivan Menjivar at UFC 157 on February 23, 2013. Faber submitted Menjivar in the first round via standing rear-naked choke. It was the Submission Of The Year.

In the Ultimate Fighter 17 Finale on April 13, 2013, Urijah Faber fought Scott Jorgensen in the main fight of the evening. Faber also won via rear-naked choke in the fourth round.

UFC On Fox 9 will always be remembered by Faber’s world-class guillotine choke, which was later pronounced for the Submission Of The Night. On December 14, 2013, Mr. Faber submitted Michael McDonald in the second round. 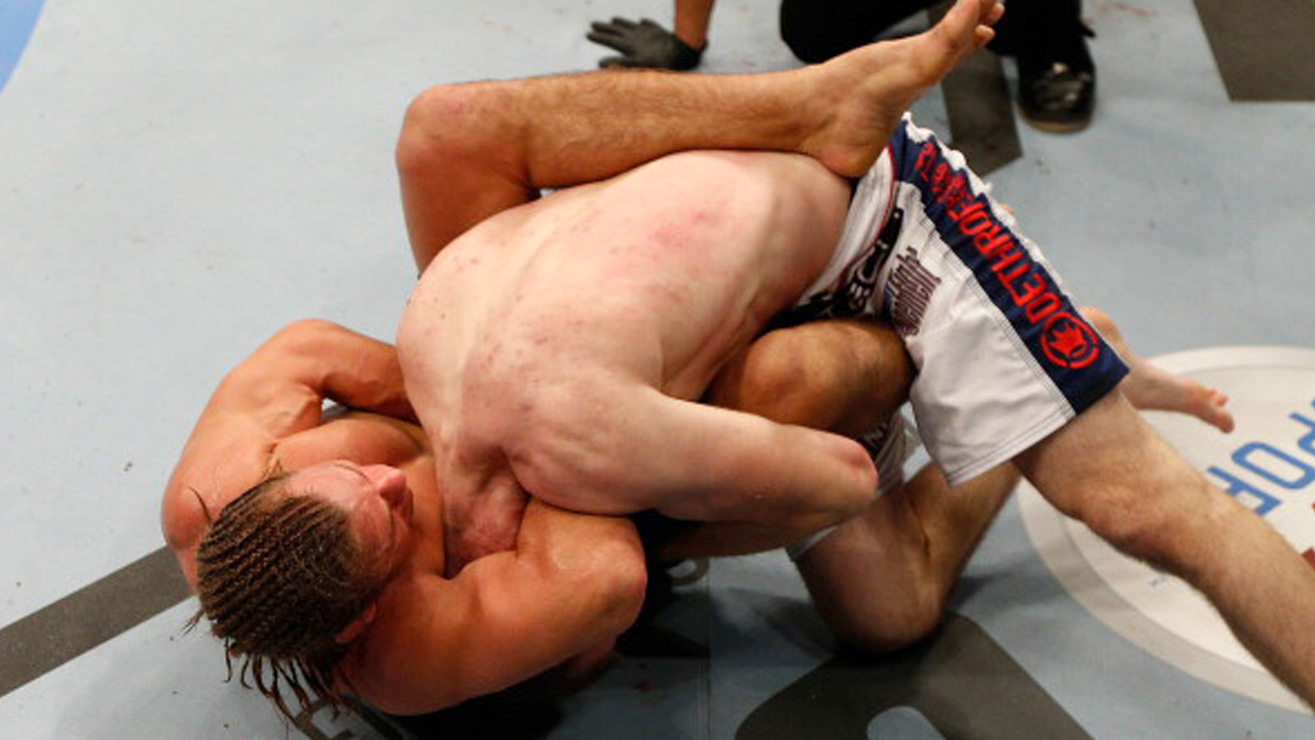 Urijah Faber had a rematch with Renan Barao on February 1, 2014, in Newark, New Jersey, in the main event of the evening. Barao knocked Faber down in the first round and continued landing shots on the ground. Despite Urijah gave thumbs-up to the referee to show he is okay, the referee didn’t see that sign and stepped up, thinking Faber is in trouble. Renan Barao won via TKO in the first round. 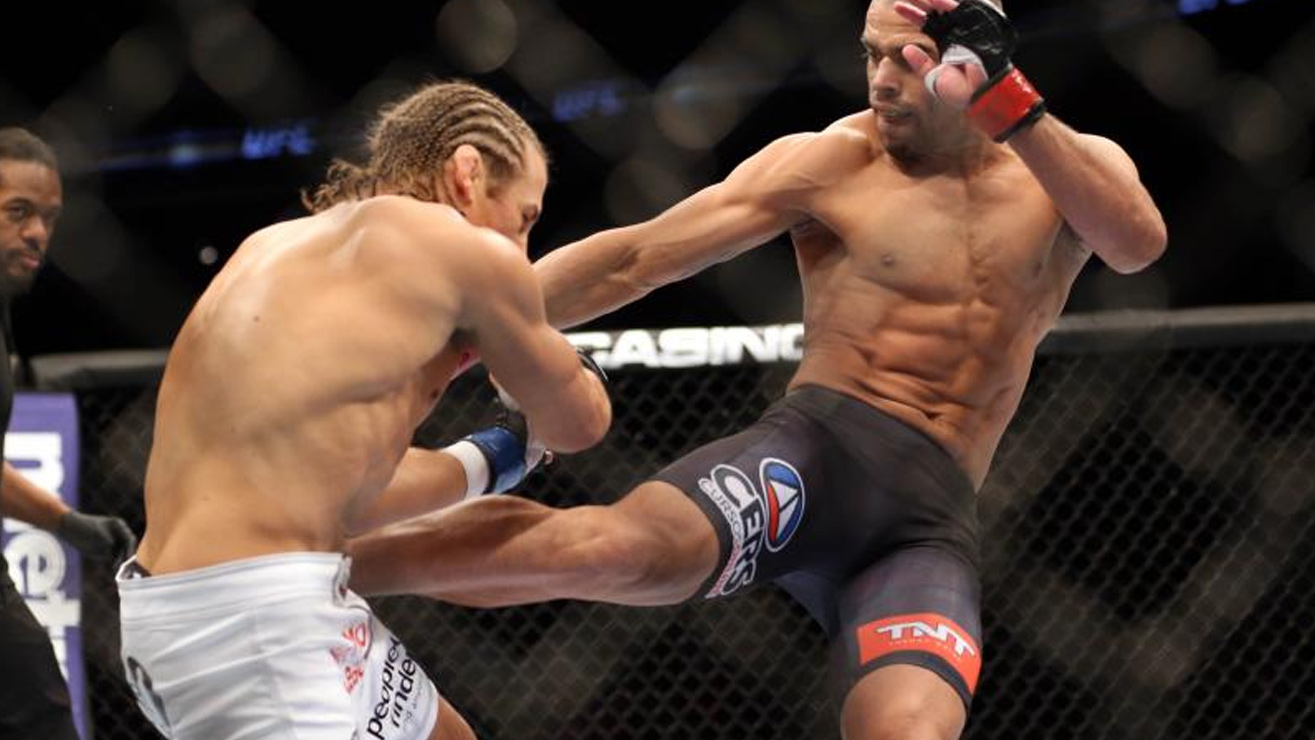 His next rival was Alex Caceres at UFC 175, on July 5, 2014. Urijah Faber won via rear-naked choke in the first round.

Francisco Rivera was Faber’s rival at UFC 181 on December 6, 2014. Faber won via bulldog choke, one of the rarest submissions in the history of UFC, in the second round. However, the fight was controversial since Mr. Faber stunned his opponent via eye poke before the submission. Despite the appeal, NSAC upheld the result.

Urijah Faber did one and only Featherweight fight in the UFC at UFC Fight Night 66, against Frankie Edgar, on May 16, 2015, in Pasay, Philippines. In the main event of the evening, Frankie Edgar won via unanimous decision, and it was his first loss in a non-title fight. 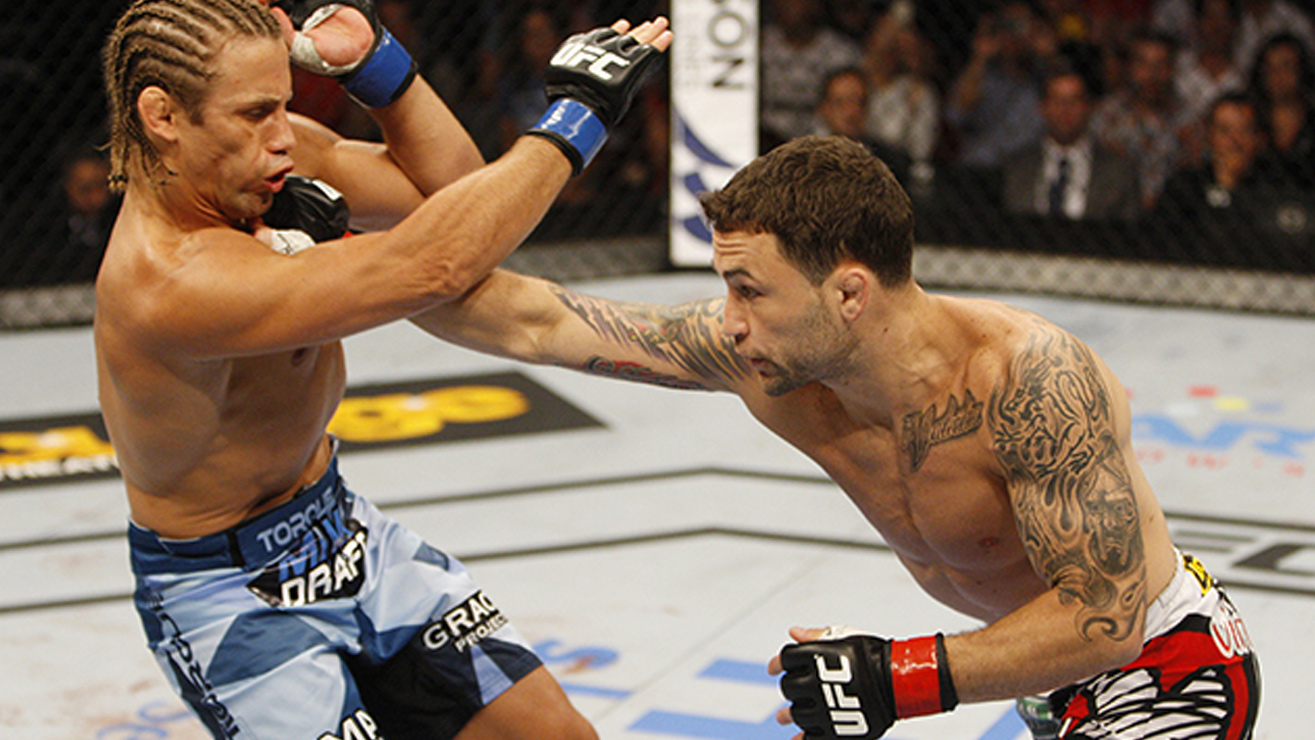 The Californian Kid returned to Bantamweight to face Frankie Saenz at UFC 194 on December 12, 2015. Faber won the fight via unanimous decision.

For the fourth time, Urijah Faber got the chance to become the champion, and his rival was Dominick Cruz on June 4, 2016, in Inglewood, California, in the co-main event of the evening. Urijah Faber and Dominick Cruz fought for the third time.

Faber fought well again for the whole five rounds, but Dominick Cruz won the fight via unanimous decision, settling their mutual score to 2-1. 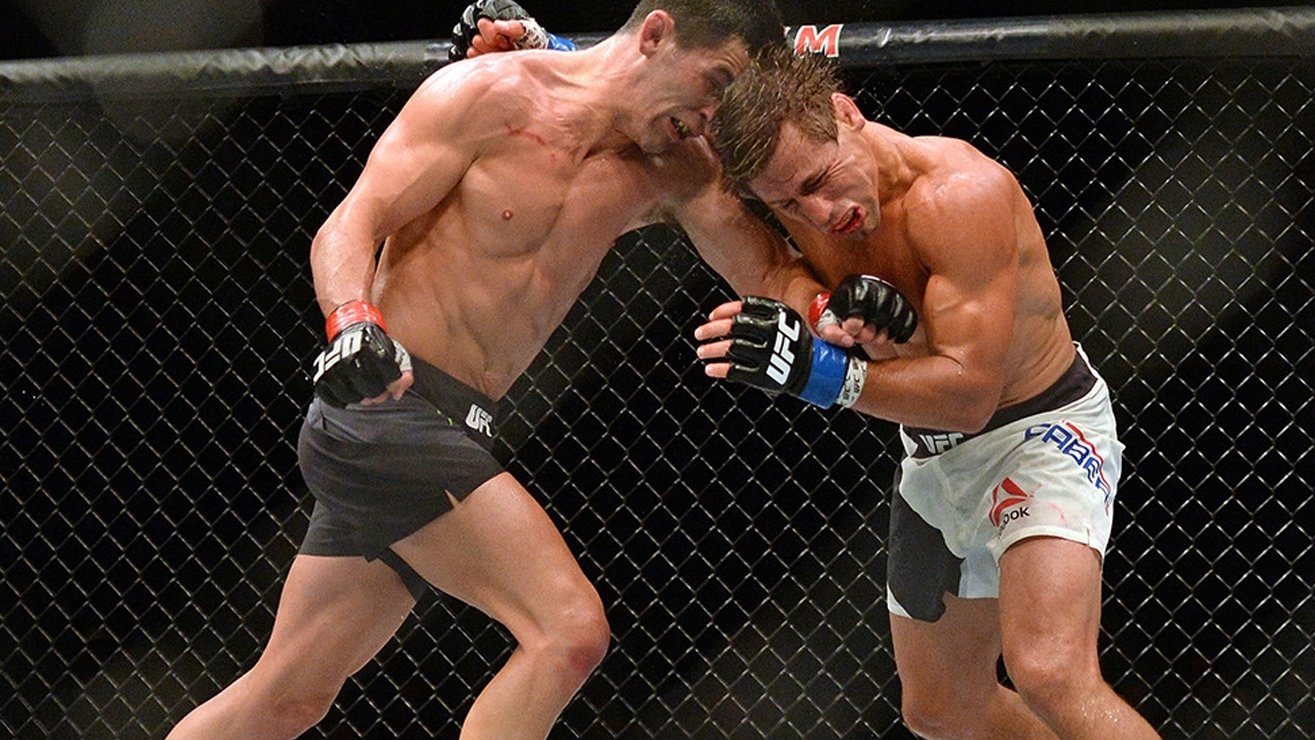 The next opponent was Jimmie Rivera at UFC 203 on September 10, 2016. The Californian Kid lost the fight again via unanimous decision.

Urijah Faber had the last fight of his career versus Brad Pickett at UFC On Fox 22, on December 17, 2016, in Sacramento, California. The Californian Kid won in his hometown via unanimous decision after three rounds and retired after the fight.

It is believed that Urijah Faber is a real ladies man. His longest relationship was with Kristi Randel, an instructor in TEAMride. Faber is a close friend of Cody Garbrandt. His current fiance is Jaslyn whom he has a daughter born on March 14, 2019.

Urijah Faber is a head coach of Team Alpha Male. Urijah presents Team Alpha Male as something more than just a team. For him, it is the culmination of intelligence, grit, dominance, and loyalty. You can find more info here – https://teamalphamale.com/.

Still watching this video of Tony Ferguson elbowing a pole to prep for UFC 223
Read Next Post →
Click here to cancel reply.