Conor McGregor is currently 31 years old according to his date of birth July 14, 1988.

Conor McGregor is one of the most fearsome strikers in the history of MMA. He has 18 knockout victories, and his opponents rarely survive until the final bell.

The trademark of Conor’s fighting style is various punches from all kinds of situations. He has never been knocked out. He is defeated three times via submission.

Conor McGregor is a southpaw fighter who tries to keep the fight standing and strike the opponent whenever he sees the chance. He is also a BJJ brown belt. When his opponent is down, Conor delivers an endless barrage of punches until the fight is stopped.

Conor McGregor is known for world-class footwork, ducking, and conditioning. He has few Taekwondo kicks in his arsenal, especially double kick to the head and front crescent kick to the head. When you face The Notorious, you will never know where is the real danger coming from.

Conor McGregor made his MMA debut against Gray Morris on Cage of Truth 2 event, on March 8, 2008, in Dublin, Ireland. The Notorious dominated the whole fight and won in the second round via TKO. On 3rd May 2008, he defeated Mo Taylor via TKO.

The first man to submit Conor McGregor was Artemij Sitenkov on 28 June 2008 on Cage of Truth 3 event via kneebar. During the year 2008, Conor had one more victory over Stephen Balley via TKO.

During 2010, Conor had one TKO victory over Conor Dillon and one loss from Joseph Duffy, who submitted him after only 0:38 in the first round via arm-triangle choke in Cork, Ireland. It was the fastest defeat of McGregor’s career. 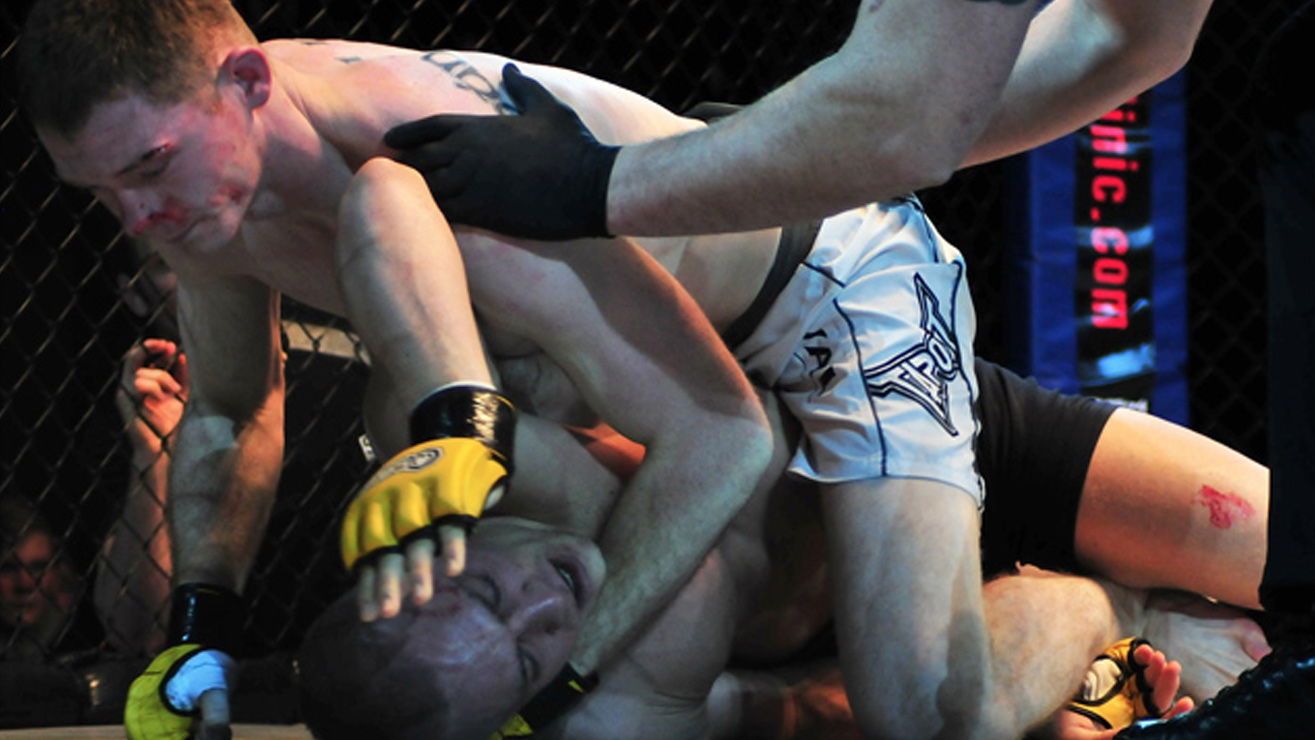 The year 2011 was the time when Conor McGregor was setting record after record. After a victory over Hugh Brady, he knocked out Mike Wood after 16 seconds and Paddy Doherty after only 4 seconds of the fight via brutal punch! Artur Sowinski survived the first round but Conor finished him in the second round via tremendous barrage of punches.

Four consecutive Cage Warriors victories launched Conor McGregor in the UFC. On September 8, 2011, The Notorious cleared Aaron Jahnsen in the first round.

Cage Warriors 45 will be remembered for Conor’s first and only elbow TKO. After Steve O’Keefe went down, Conor McGregor delivered few brutal elbows and referee stopped the fight. The event was held on 18th February 2012 in Kentish Town, England. 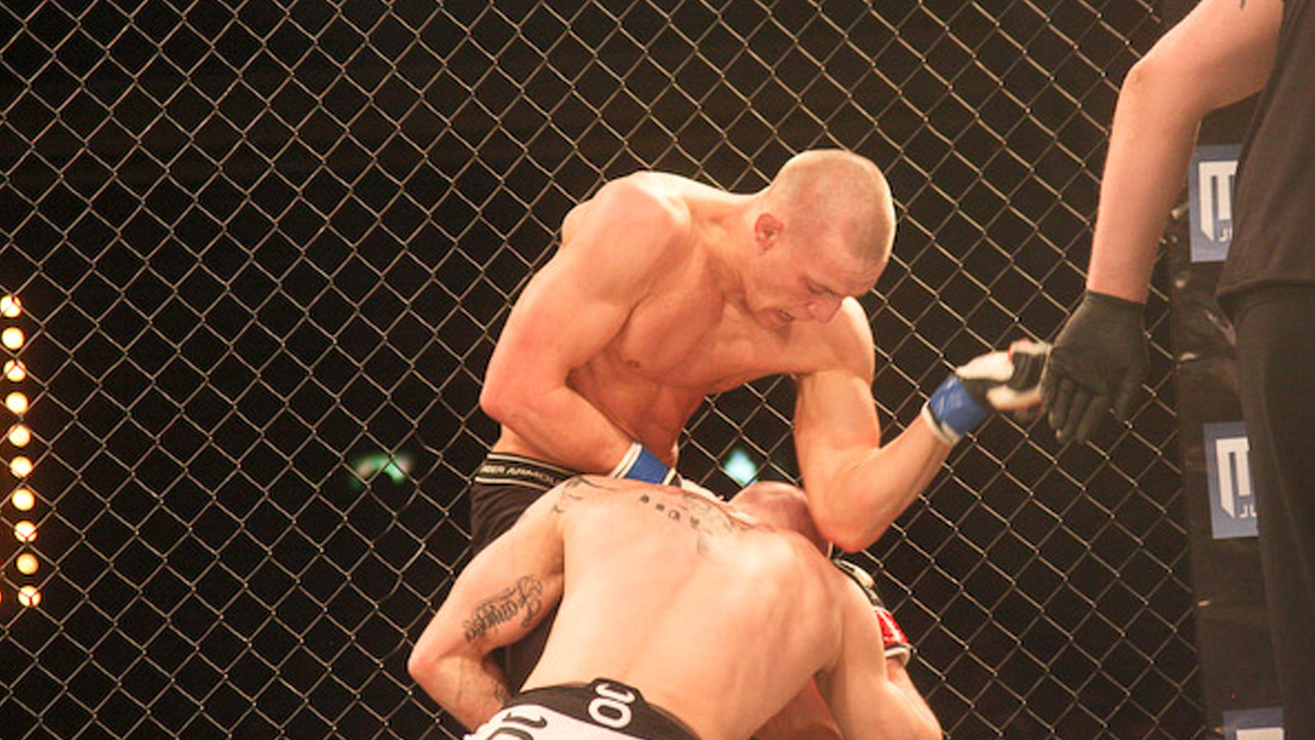 Conor McGregor won Cage Warriors Featherweight Championship via the only submission victory of the career. On 2nd June 2012, The Notorious shocked the world by submitting Dave Hill in the second round via rear-naked choke in front of his hometown fans! 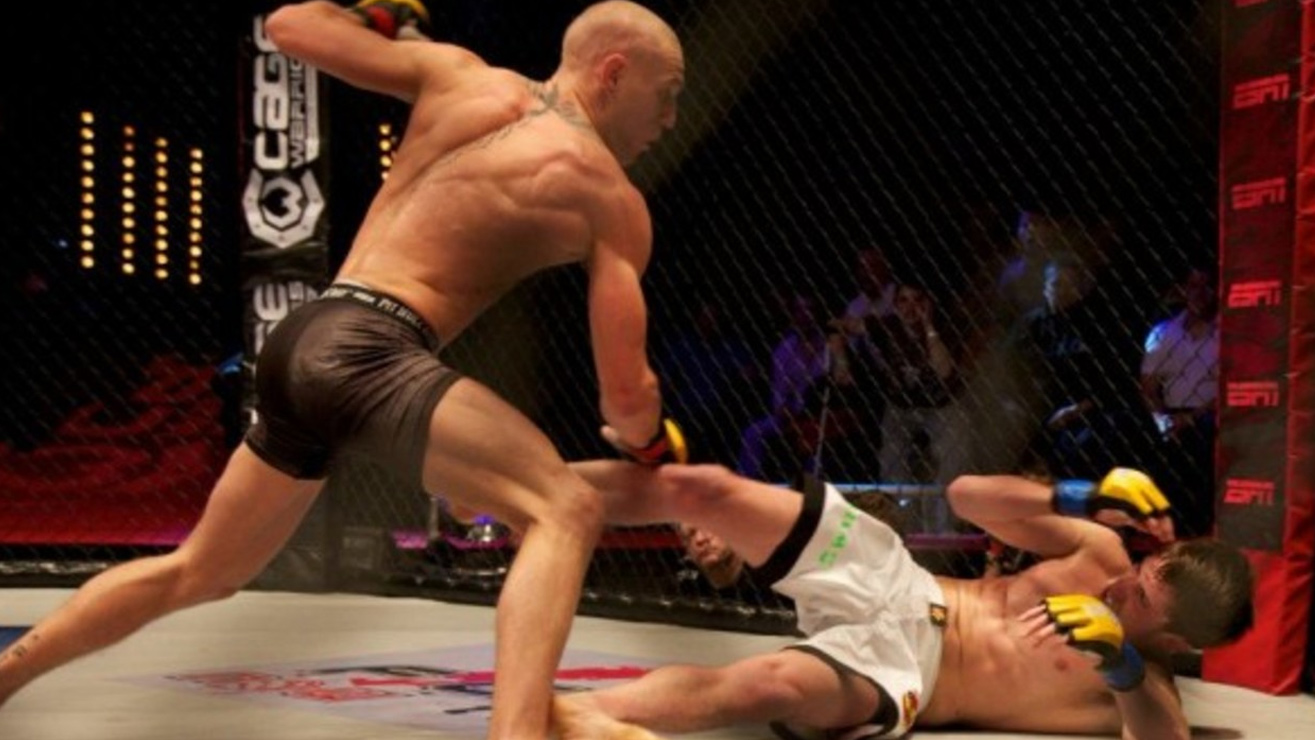 He also became Cage Warriors Lightweight Champion via KO victory over Ivan Buchinger. The fight was held on December 31, 2012, in Dublin, Ireland. The eighth consecutive victory gave Conor a chance to sign for the UFC! 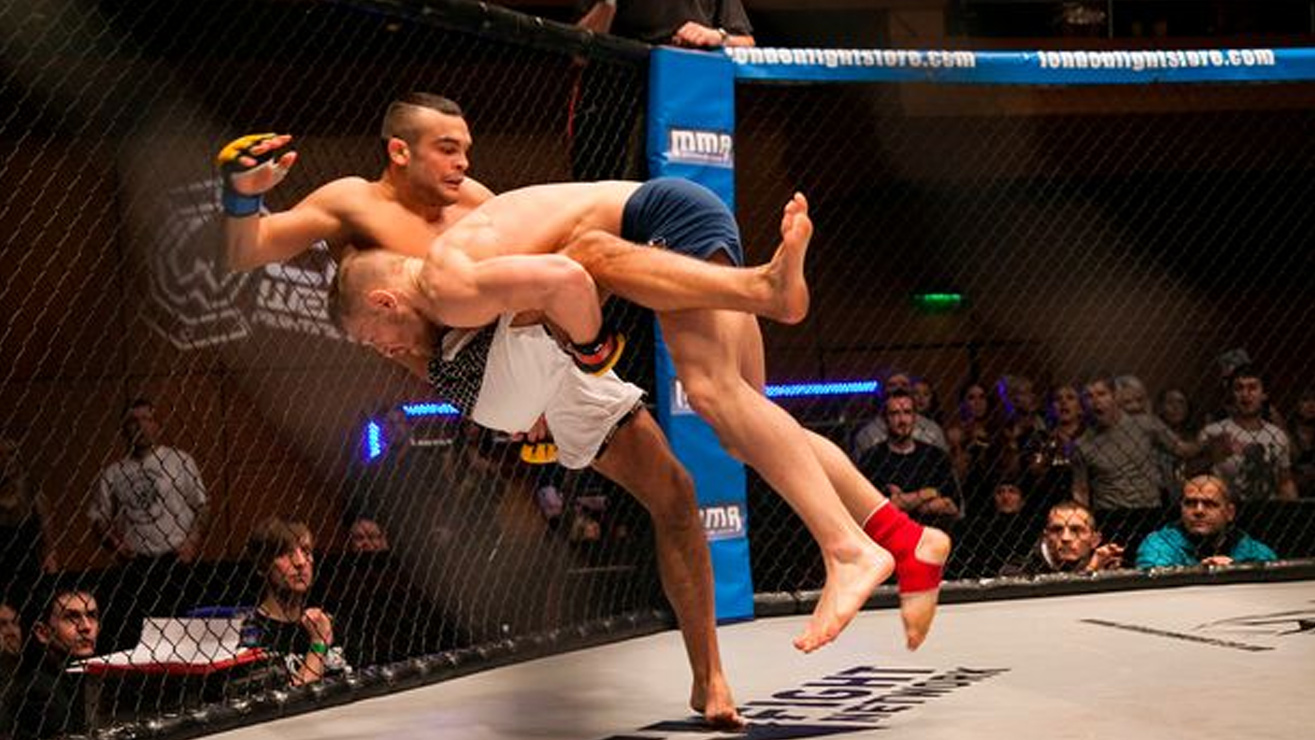 The Irish superstar made his Featherweight UFC debut in the fight against Marcus Brimage on UFC on Fuel TV 9. The Featherweight fight was held on 19th July 2014, in Stockholm, Sweden. Conor McGregor demonstrated how serious he is and crushed Brimage after only 1:07 in the first round via TKO. 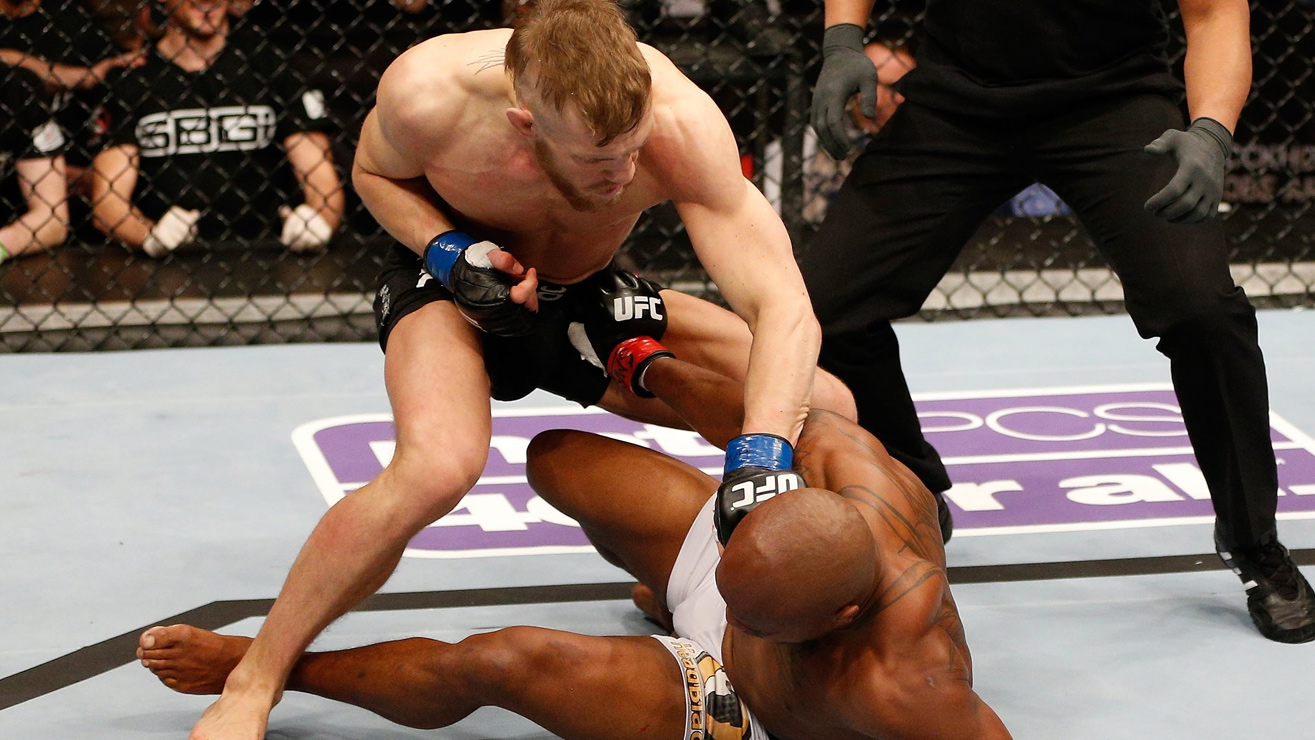 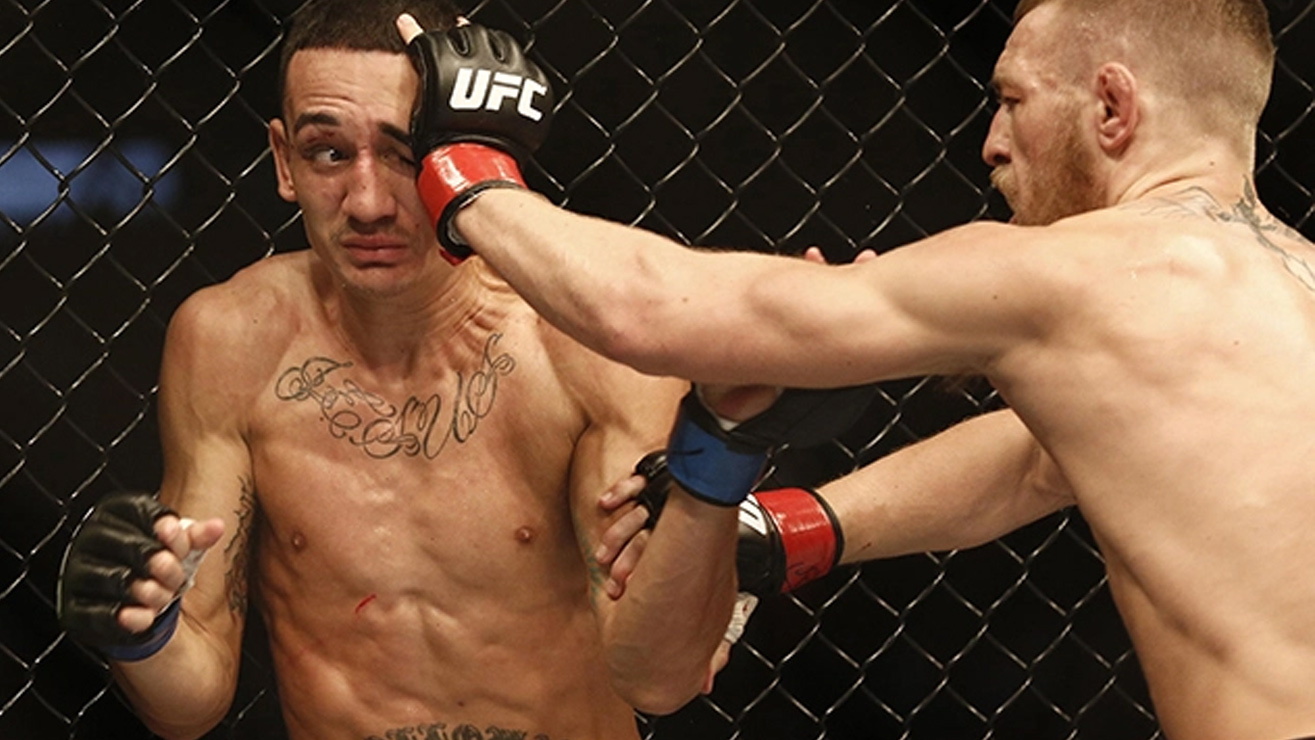 Conor McGregor fought for the first time in the main event of the evening on 19th July 2014, in Dublin, Ireland. The event name was UFC Fight Night 46. Brandao basically did nothing but receiving Conor’s punches and the fight was over in the first round. It was his first Performance of The Night.

Conor McGregor faced Dustin Poirier in UFC 178 in Las Vegas, Nevada. After a strong left cross, Poirier went down and Conor McGregor finished the fight via hammer fists in the first round! The Notorious demonstrated the power of ducking and movement in this fight. 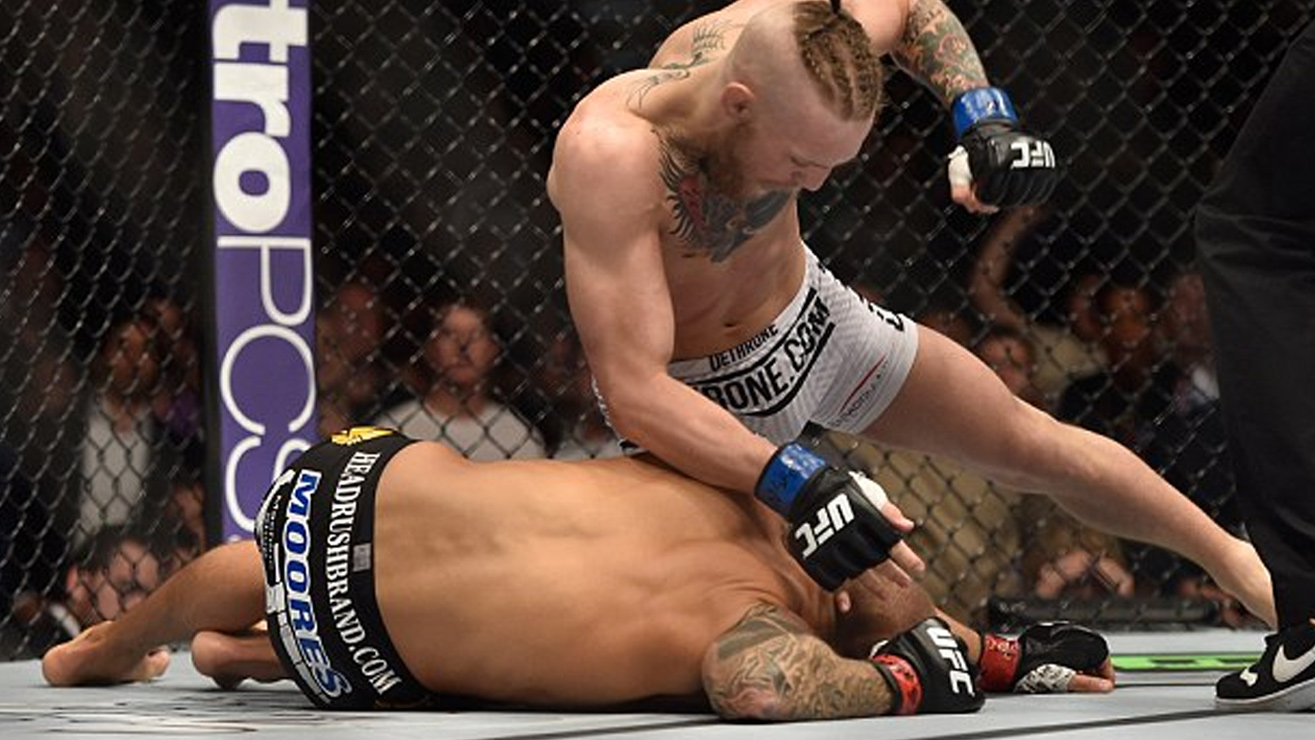 Conor McGregor was elected again for the main event of the evening for the fight against Dennis Siver at UFC Fight Night 59, which was held on 18th January 2015, in Boston, Massachusetts. The Irish superstar won with ease in the second round, and this was a 13th consecutive victory. 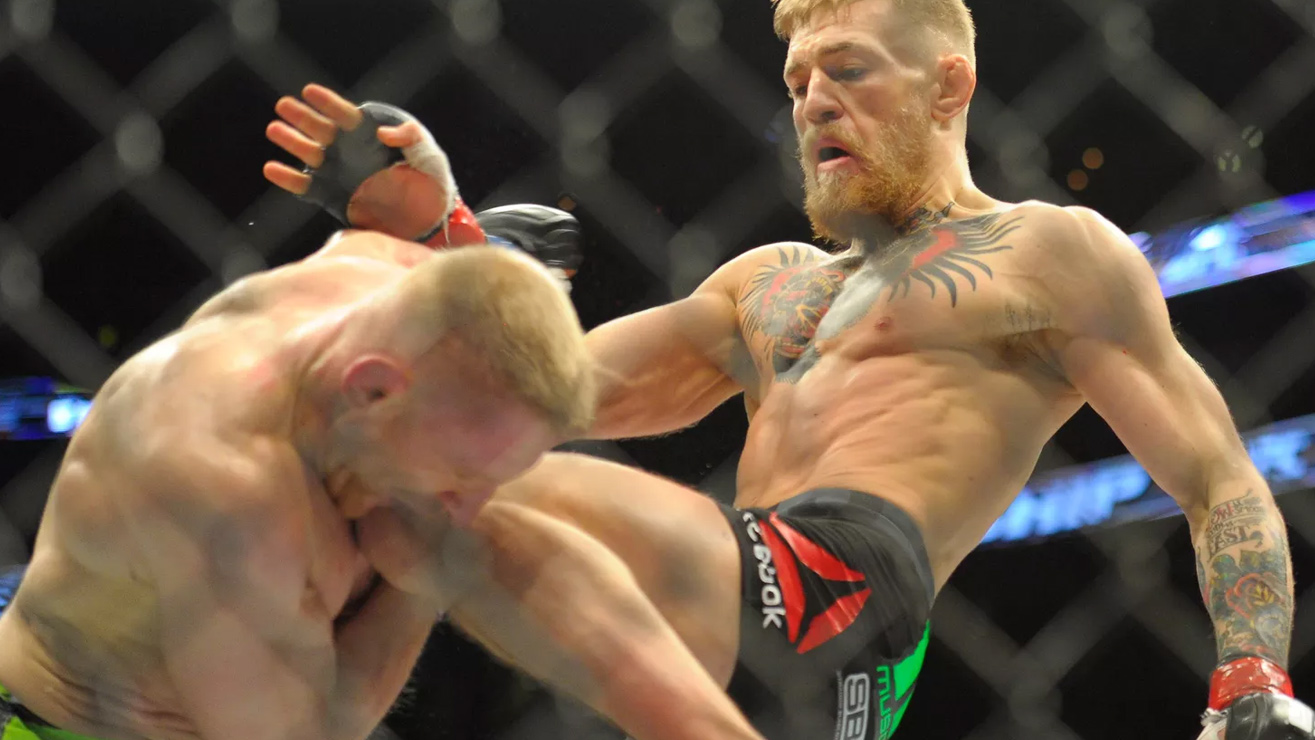 
The Notorious got a chance to fight for the title in UFC 189 versus Chad Mendes. The event was held in Las Vegas, Nevada, on 11th July 2015. Mendes was countering well, but Conor McGregor was delivering punch after punch and knocked him in the second round, and became UFC Featherweight Champion. 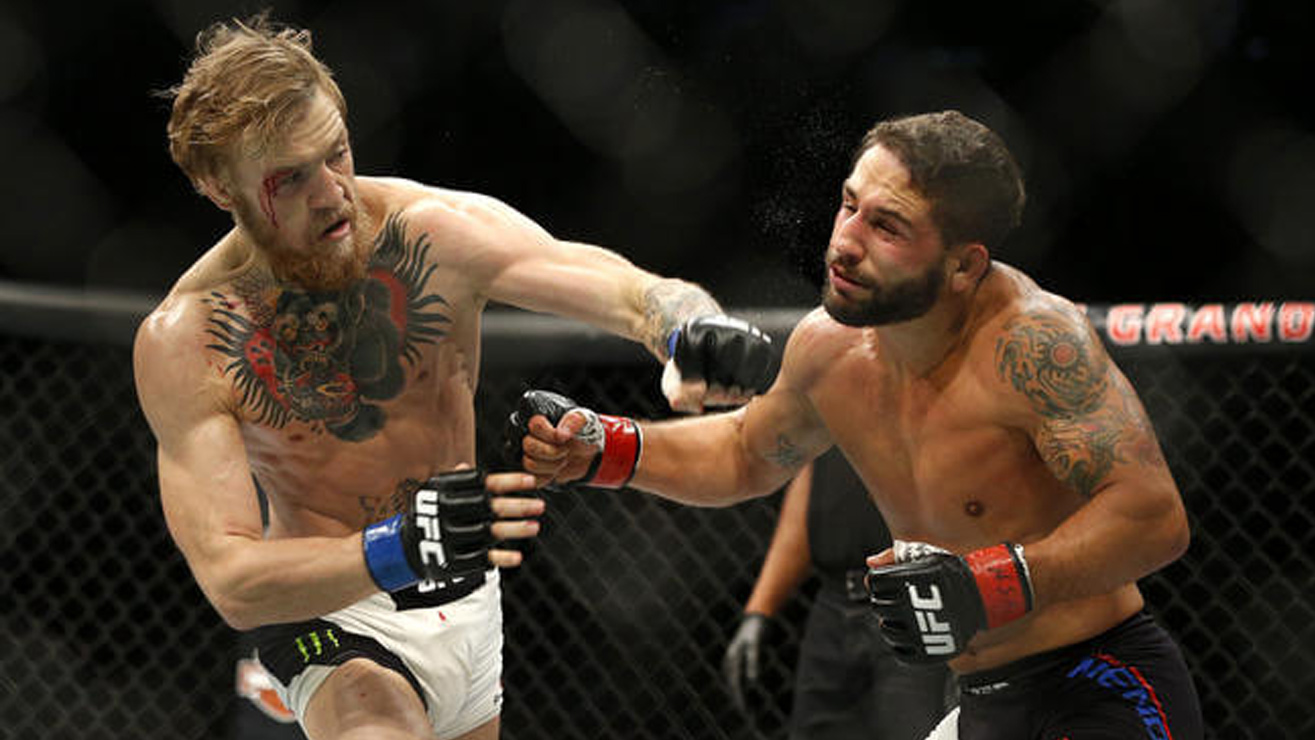 In his title defense in UFC 194, the opponent was Jose Aldo, on 12th December 2015, in Las Vegas, Nevada. Conor McGregor unexpectedly set one more record – the fastest title shot victory in the history of UFC!

At the beginning of the fight, Aldo attacked with a right cross, which was followed by the strong left hook. At the same time, McGregor countered via left cross, receiving the hook to the cheek. Aldo went down and Conor continued delivering hammer fists. The referee stopped the fight after only 13 seconds! 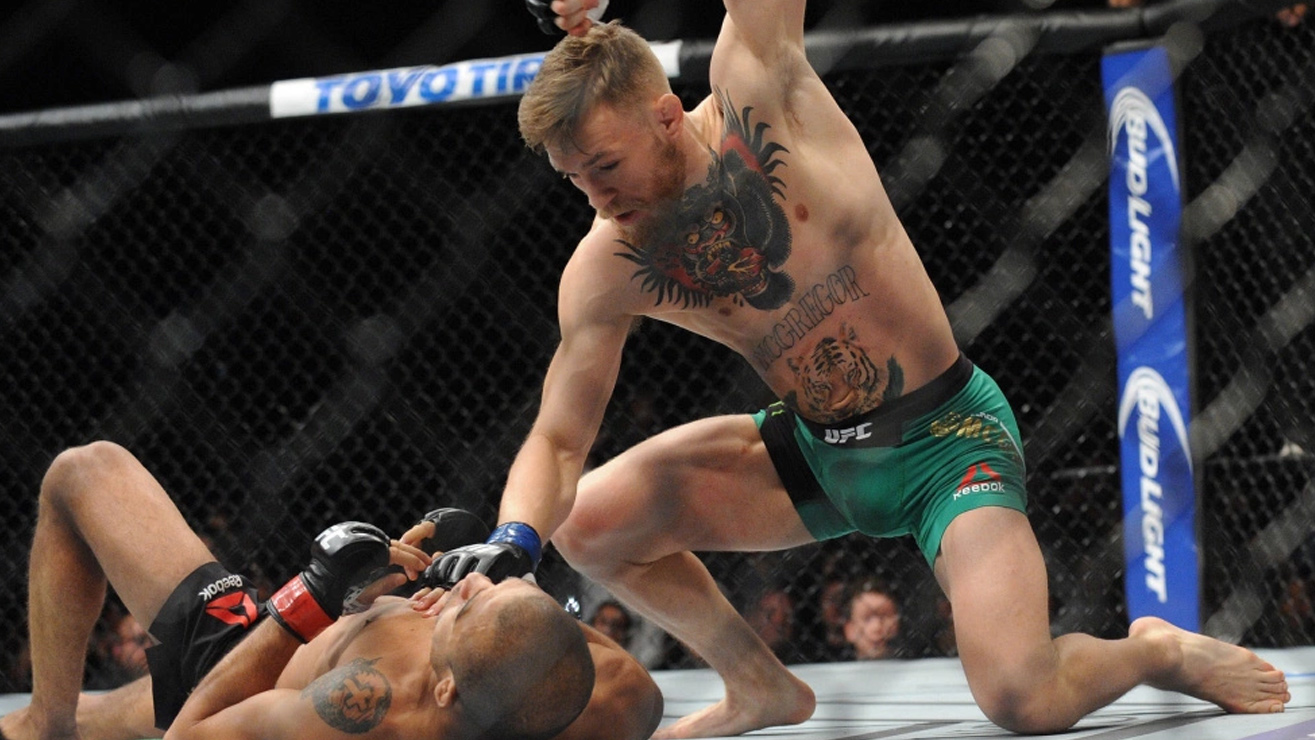 McGregor became UFC Lightweight Champion against Eddie Alvarez in UFC 205. The event was held on 12th November 2016 in New York City, New York. The Irish superstar rocked Alvarez in the second round. When he tried to duck to the left, Conor McGregor delivered a strong right uppercut to the chin and finished the fight. 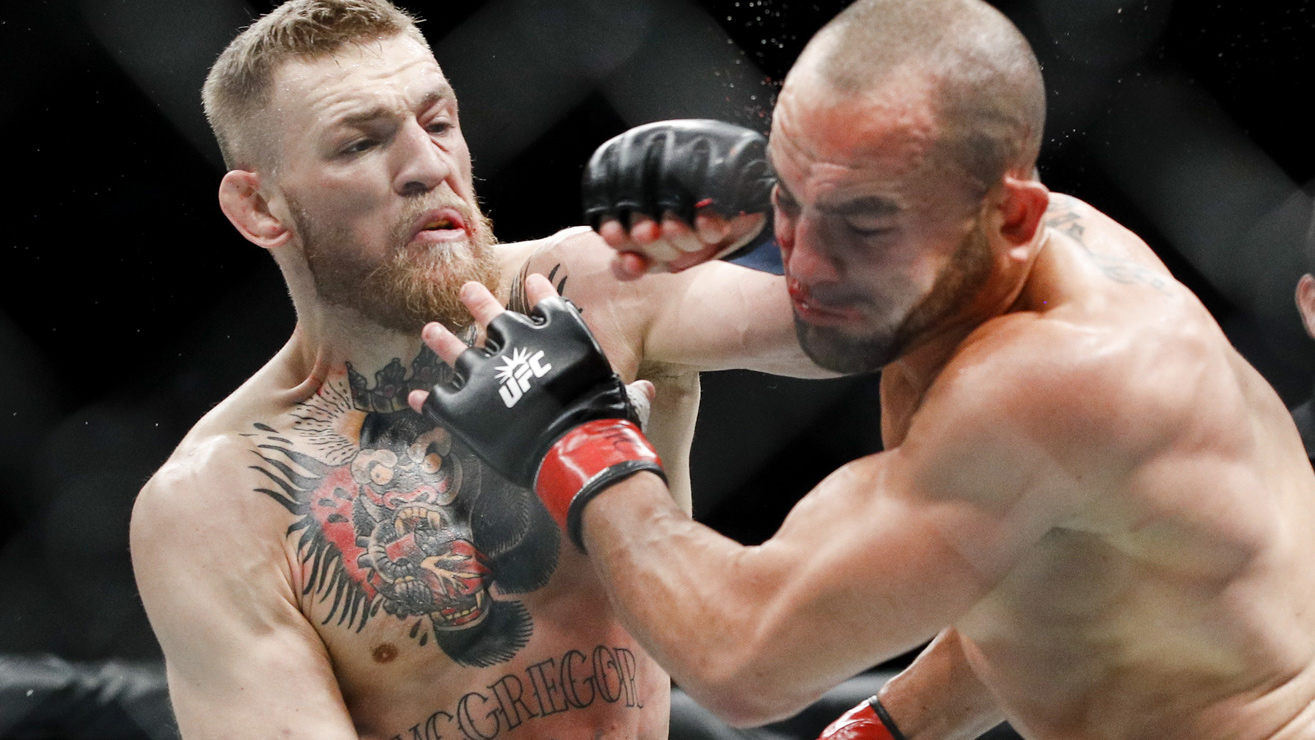 Conor McGregor made an insane move by going from Featherweight to Welterweight. The first fight with Nate Diaz was held at UFC 196, on 5th March 2016, in Las Vegas, Nevada. Conor McGregor vs Nate Diaz confrontation started at the weigh-in.

The Notorious was the better rival in the first round. But when Nate Diaz put McGregor on the fence, he connected with two hooks, of which one was a slap. Conor opened up a cut on Diaz, which was noted by Mike Goldberg.

The rematch was set for the UFC 200, but The Notorious has pulled off the fight after failing to fulfill media obligations. The two faced again at UFC 202, on 20th August 2016. Conor McGregor won via majority decision. 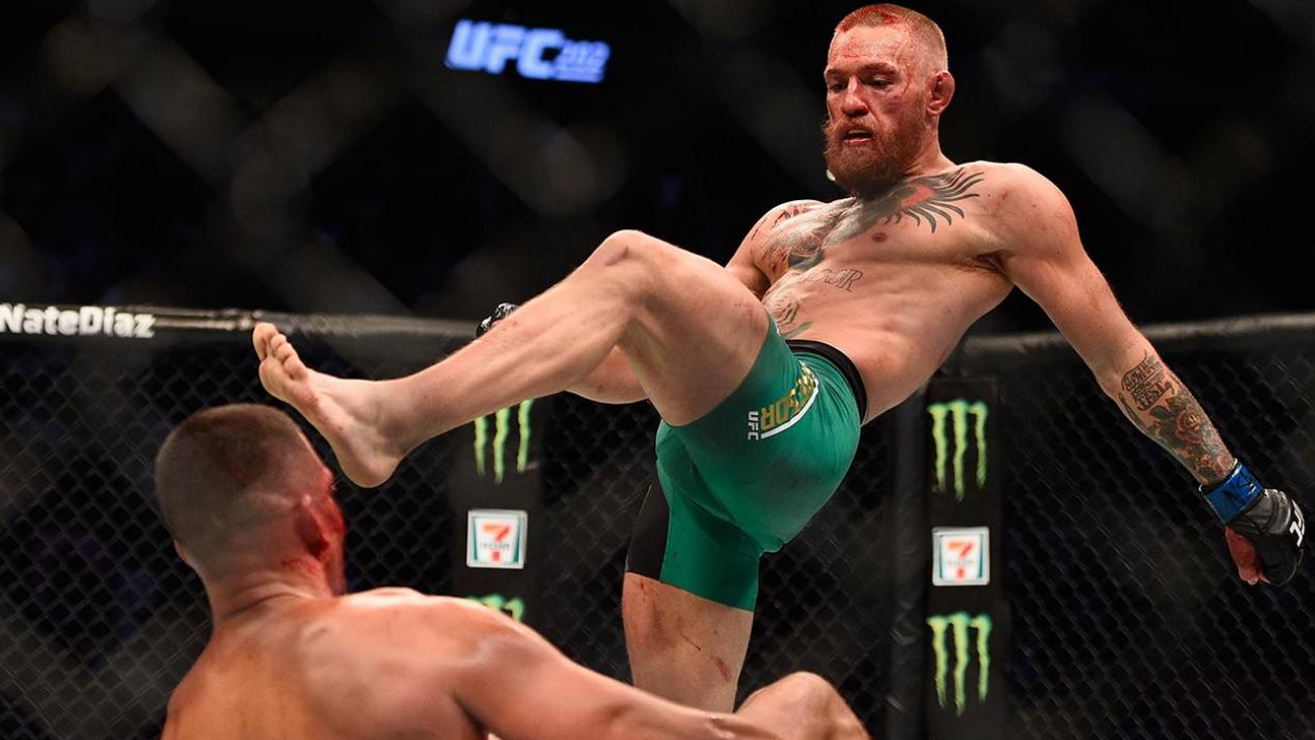 The two faced on August 24th, 2017, in the fight for WBC Money Belt. Mayweather got 100 million dollars, while McGregor was given 30 million. The fight had 4.3 million pay-per-view buys!

During the first three rounds, Conor had a few amazing strikes through Mayweather’s guard. But in the round 4, he started to breathe heavily and he was very fatigued during the following rounds. He was warned few times for throwing a hammer fist.

In round 10, Mayweather landed few strong punches and Conor McGregor was rocked. Since he barely stood on his feet and didn’t defend or tried to return, the referee stopped the fight. 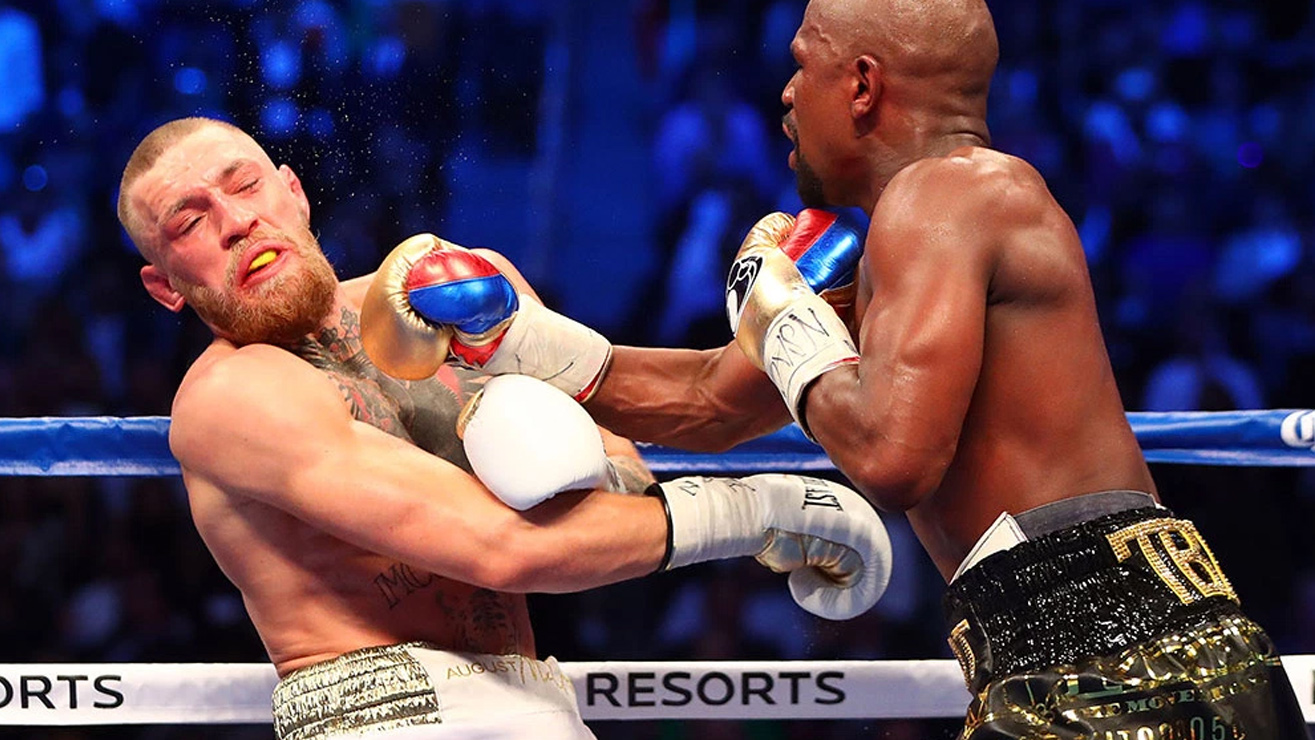 Conor McGregor – Next Fight And Controversies

Conor McGregor should face Tony Ferguson at UFC 219 but the fight was called off due to Bellator 187 incident. When his teammate Charlie Ward won the fight, The Notorious jumped into the cage and went berserk. He even confronted the referee Mark Goddard, and put hands on him few times! Later he apologized for reckless behavior.

There were rumors that The Notorious is going to face Manny Pacquiao in a boxing match but Dana White dismissed it.

When Conor saw Irish flag and his statue, he decided to throw a surprising visit to one of his biggest fans. Not only that the fan was surprised, but Conor said he doesn’t have Conor McGregor shoes the fan had in his apartment!

Conor McGregor is in a relationship with his girlfriend Dee Devlin, and they have a son. His documentary was released on November 1, 2017, under the name Conor McGregor: Notorious. 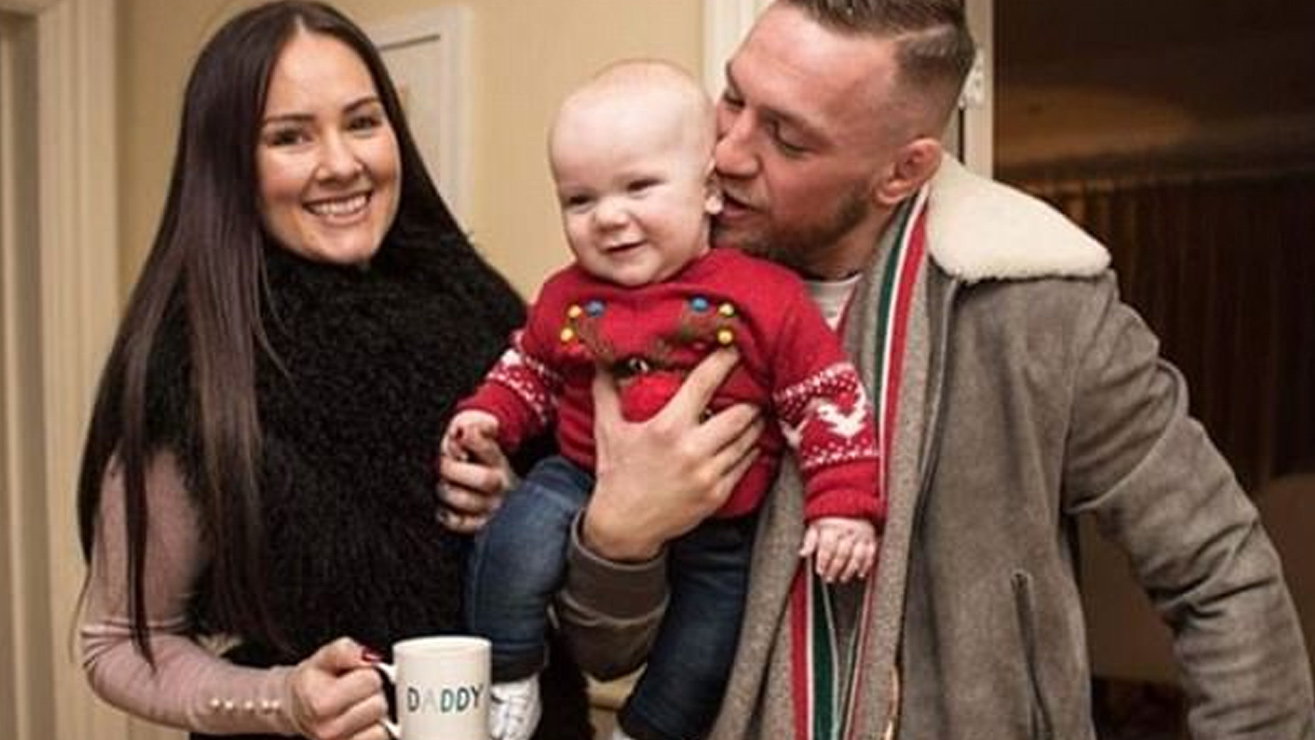 Dana White Blames “The Powers That Be” at Disney for Stopping...

Breaking: UFC 249 Has Been Canceled, All UFC events postponed indefinitely

Rose Namajunas Withdrew From UFC 249 Fight Due To Deaths In...

Promotion Releases UFC 249 ‘Ferguson vs. Gaethje’ Promo ‘The Most Stacked...