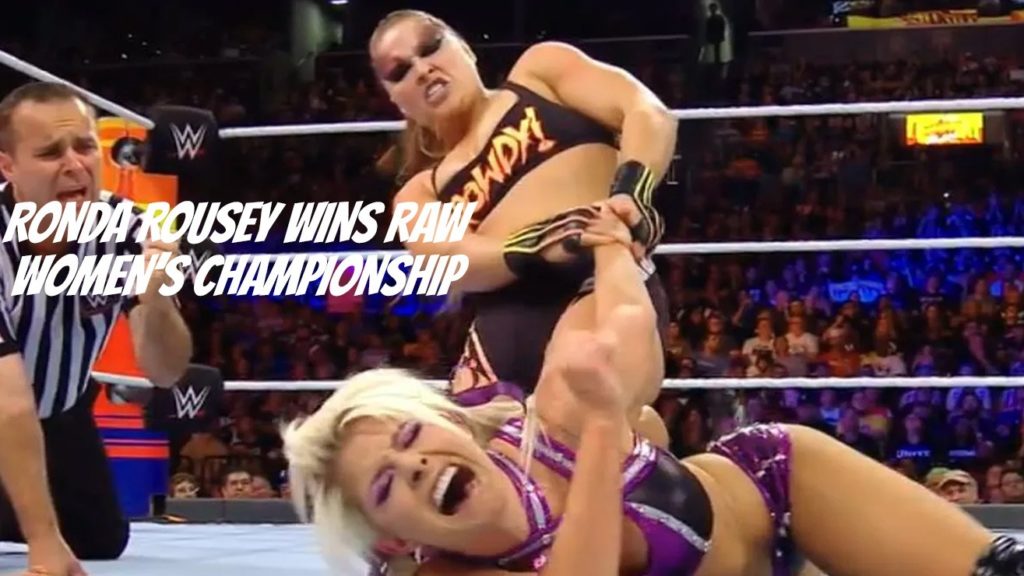 Former bantamweight champion Ronda Rousey made history on Sunday night, just merely a seven months in WWE professional career, she scores a Raw women’s title at Summerslam after scoring a submission win over Alexa Bliss and becomes first women in the history to hold titles in both UFC and WWE.

The outcome of the match is scripted in the world of WWE Rousey’s picking up things, and improving accuracy as an in-ring performer as well as to the understanding of play style have made her an instant hit with WWE fans.

Check out the action below, how Rousey makes a quick work off Alexa Bliss ended the match with her signature armbar.

Sure, @RondaRousey will give you the ring… but that doesn't mean she won't take it back with PURPOSE! #SummerSlam #RondavsAlexa pic.twitter.com/pY2v0A38OT

Rousey, who was out of MMA sports for two years after suffering disastrous losses in her last two fights under the UFC banner. During her peak time in UFC, Rousey steamrolled all the top contenders in the division. However, all that vanishes, when Rousey defeated by Holly Holm at UFC 193 via head kick knockout back in November 2015. Then, she returned at UFC 207 in 2016 and suffered a 48-second TKO loss to Amanda Nunes.

After those losses, Rousey went camouflage and didn’t talk to media for some time. Earlier this year she signed with WWE where the 30-year-old made her professional debut at Royal Rumble PPV in Philadelphia, one of WWE’s flagship events. Rousey also took part in WrestleMania 34 back in April, where she teams up with Kurt Angle to take on the WWE power couple in a mixed tag team match Paul “Triple H” Levesque and Stephanie McMahon and impresses the audience with her excellent performance.

With the win, Ronda Rousey joins Brock Lesnar and Ken Shamrock as they are the only fighters to win titles in both the WWE and UFC (Rousey the first woman).