Tyson and Jones return to the ring in an eight-round exhibition boxing match on November 28. 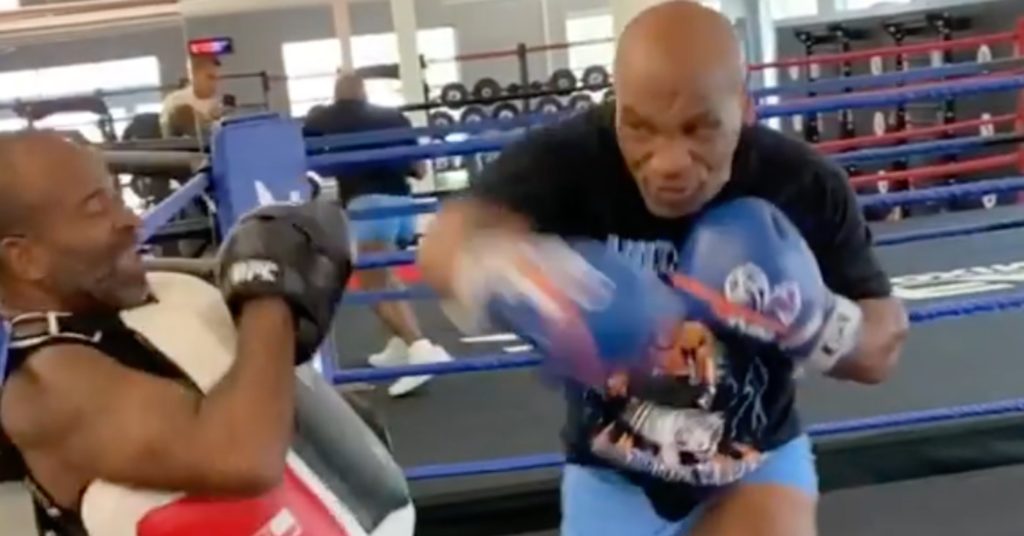 When Mike Tyson faces Roy Jones Jr. this weekend, he will look to do what he was most famous for in his prime — get a quick knockout.

Tyson and Jones will return to the ring when they face each other in an eight-round exhibition boxing match on November 28.

While many in the combat sports world are understandably excited to see the two boxing icons finally face off against each other — even if it’s well beyond their prime — there was some disappointment when it came to the ruleset for the bout.

For one, if either fight is cut during the bout, the contest will be stopped. In addition, there are no judges involved as this is purely an exhibition with the California State Athletic Commission expecting both fighters not to seek the knockout.

However, Tyson won’t be following those expectations according to his coach Rafael Cordeiro.

“Two legends in the ring, they both are going for the finish,” Cordeiro told MMA Fighting. “The fight has three judges [sic] and a referee, so it’s a real fight and must have a winner.

Tyson’s Plan Is To Get The Knockout

Enforcing a no-knockout rule is extremely difficult, especially when you have two competitors such as Tyson and Jones who are known for finishing their opponents.

And as far as Cordeiro is concerned, no fighter spars a full month purely for an exhibition bout.

“… But the plan is to get in and not walk away from that Mike Tyson essence. (The essence) is there and no one can take it away. If he has the opportunity and realizes (Jones Jr.) felt it, he’ll go for the knockout.”

Numbers don’t lie. haters are mad they can’t get numbers like this. Saturday is reckoning. @RealRoyJonesJr you better be ready pic.twitter.com/NwwoAty3YY

Whatever happens, it promises to be a memorable event.

AJ McKee Used To Do The 'McKee-otine' As A Kid: 'My Dad Used To Hate That Move'
Read Next Post →
Click here to cancel reply.