Former UFC superstar Ronda Rousey’s training facility Glendale Fighting Club has always been a source of controversy. Whether it’s the deterioration of Travis “Hapa” Browne’s fighting skills since moving his training camps to Glendale, or head coach Edward Tarverdyan’s advice while cornering Rousey in her 48-second blowout loss to Amanda Nunes, the Glendale Fighting Club has had its share of bad press.

Boxing reporter Elie Seckbach was at Glendale Fighting Club for a media event to promote the bout but got into hot water for “sh*t talking” about  Ronda Rousey.

Seckbach is a respected figure within the boxing community and is known for breaking stories and exclusive interviews with the biggest boxers in the world.

As Seckbach tells it, he had attempted to interview Rousey years back, but was thwarted by the former UFC champion because he “wasn’t big enough”.

Seckbach took to his YouTube channel to provide his side of the story:(Quotes Via MMAMania)

“I was invited to cover the press event for ‘GGG’ and Vanes Martirosyan. I’ve known ‘GGG’ and Vanes for many, many years both before they were very well known. Vanes I’ve had a great relationship with, same thing with ‘GGG,’ very respectful. I am cool with both of them. I walk into the gym and Vanes’ dad runs up to me, hugs me and introduces me to Vanes’ kids and his wife. Then this kid comes over, I don’t even know him, maybe I met him five years ago. I’m not sure of the guys name, but he was very nervous or agitated. Obviously looking back he was mad for Ronda. I understand, like I said we are very respectful, we keep it classy at these things. So this kid comes over, then comes back after two minutes and says ‘Come with me,’ takes out his camera and says, ‘You have to leave, get the F out.’ At first I thought it was a joke. If you watch my video and see my facial expressions, I thought it was a prank because in boxing gyms we always do pranks. But this kid was dead serious, don’t know his name and I don’t know who he is. But obviously he has some feelings toward Ronda. He’s looking out for her, they are friends, I get it. Like I said, I respect that he looks out for his friend. But here is my thing: I wasn’t there for Ronda, I wasn’t there for MMA and I wasn’t there for UFC. I was there to help promote a fight. We cover boxing, we love boxing. So he posted on his Instagram, very classy move, that shows a lot of class of course. And Ronda posted, ‘Now some people will learn,’ I am paraphrasing. She said ‘relationsships are more important than clicks.’ My answer to that is, listen I cover boxing and when you say you’re going to knock out Floyd (Mayweather), I’m sorry but I have to stand up for boxing. I have to defend the sport that I am passionate about and I cover. If you dish, you should be able to receive, don’t get mad. If a fighter doesn’t win two fights it’s not my fault. Like I said, no hard feelings we keep it moving. In fact, Edmond Tarverdyan, the head coach of the gym saw me recently at a fight and asked me if I could help out one of his fighters who is 5-0 and give him some shine. And I said absolutely.”

Rousey even commented on Vanes’ video of Seckbach’s removal from Glendale Fighting Club: 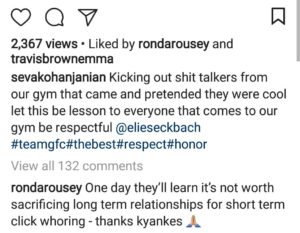 Pearl Gonzalez and Bárbara Acioly Get Heated at Invicta FC 29 Weigh In and We Can't Lie... We're Into It
Read Next Post →
Click here to cancel reply.