Paul will first have to take care of business when he faces former UFC welterweight champion Tyron Woodley in a boxing rematch this weekend.

Jake Paul has big fights in mind for himself in the future.

The YouTuber-turned-boxer is currently getting ready to take on former UFC welterweight champion Tyron Woodley in a short-notice boxing rematch this weekend after Tommy Fury had to pull out due to injury.

While it’s not the fight everyone wanted, it’ll still gain plenty of attention and eyeballs while both Paul and Woodley are expected to make bank once again following their first fight back in August.

However, win or lose, Paul will be targeting bigger fish than Woodley after the weekend is over. One of them could very well be Stockton native Nate Diaz.

Should that fight in particular happen, Paul expects plenty of pay-per-view buys.

“1.5 million [pay-per-view buys] probably,” Paul responded when asked by Luke Thomas in an interview on Wednesday how a fight with Diaz would do. “Look, I’m not going to say anything but there’s a reason for everything.”

There are other fights that can help yield that figure or even more for Paul as well. In the All Access video series by Showtime, Paul notably spoke of making $250 million from a fight eventually.

So who gets him to that figure?

“I think it’s multiple fights but I think there’s the Diaz fight, the [Conor] McGregor fight, the Canelo [Alvarez] fight. You know, the Jake Paul vs. Logan fight.”

Jake Paul: If Yildrim Can Fight Canelo, Why Can’t I?

It’s not the first time Paul has spoken of the super middleweight champion in Alvarez as he has previously called for a fight with the pound-for-pound great.

Whether it happens — or even gets sanctioned — remains to be seen, and given what we know about Alvarez, the chances of him accepting that fight are highly unlikely regardless of the money it would make.

However, Paul is serious when he talks about fighting Alvarez.

“I mean that, 100 percent I’m going to fight Canelo. 100 percent,” Paul said. “Look at this guy, [Avni] Yildrim, I don’t even know his first name…his nickname is ‘The Turkish Warrior.’ Regardless [of being a mandatory], he got to fight Canelo. Regardless of what he is or isn’t, he sat down in the corner and quit. He didn’t throw one punch. He just took a beating for a couple of rounds and then quit in the corner.

The chances are still slim, but if Paul can pull it off, it’s yet another feather in his cap. 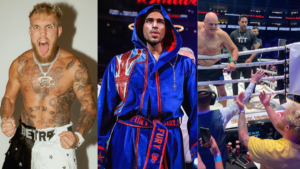 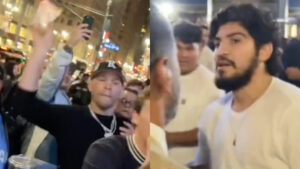